Because You Demanded It / Mortal 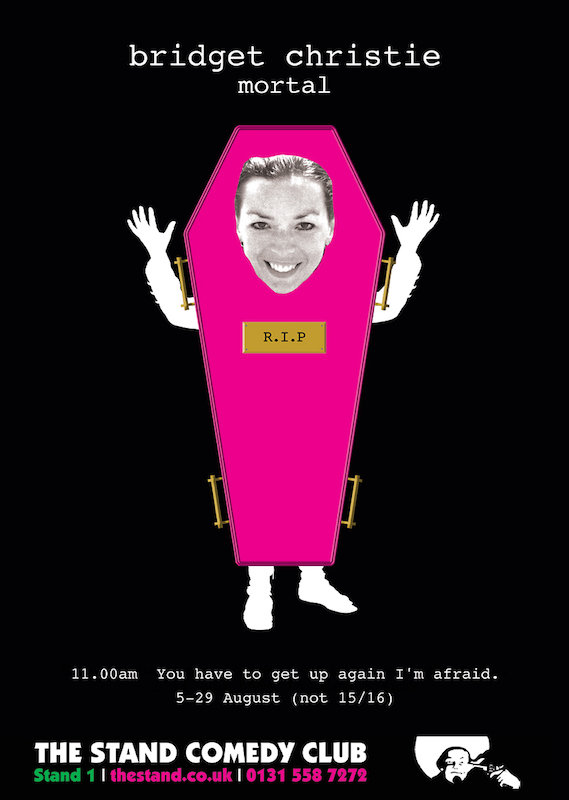 Bridget’s 2016 Edinburgh show was originally called Mortal, but in the month before it’s debut, it went through substantial changes, and was renamed ‘Because You Demanded It’ for the tour that followed.

Here’s the blurb in the Fringe guide…

Brand new work in progress show from the stupid idiot and multi award-winning stand-up, Guardian columnist and author of A Book for Her. Bridget is going to die, but what will she leave behind? This and many other things will be discussed, including bigots, the Tories, Motörhead vibrators, aging, water massages, magic eyelift stickers and legacies.

Press For Because You Demanded It / Mortal

‘I hate what this country looks like now’ iNews, 13th February 2017

How Bridget Christie found the funny side of Brexit The Guardian, 3rd February 2017

More than any other show I’ve done, this one has been the most divisive The List, 31st January 2017

The 50 funniest films… chosen by comedians The Guardian, 18th December 2016

Comedy at the Edinburgh Fringe The F Word, 14th August 2016

Brexit and the Edinburgh fringe: ‘Selfishly, it was a bit of a godsend’ Guardian, 4th August 2016