More than any other show I’ve done, this one has been the most divisive

The award-winning comic had death firmly on her mind when Britain dramatically voted to leave the EU. Here she explains how she went from remains to Remain

Written by Brian Donaldson in The List on January 31st, 2017 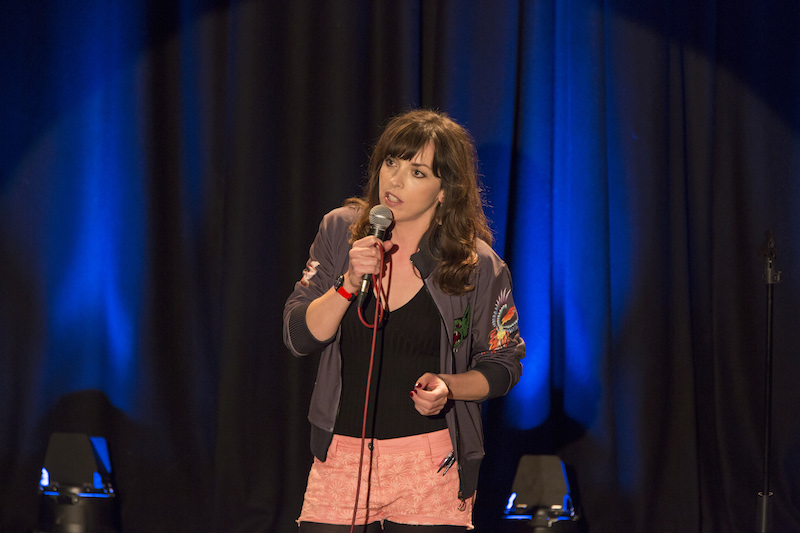 Bridget Christie began 2016 working on Mortality, a brand spanking new show that would turn out to be topical in the extreme. Even though death is a subject which constantly haunts us, the sheer volume of major celebrity demises across the ensuing 12 months (from Ziggy Stardust in January to Princess Leia in December) meant that the Grim Reaper could consider 2016 as something of a benchmark year.

As Christie told me 12 months ago, death has been everywhere during her life. ‘We’re quite open about death in our house, because the kids ask about it. And I can’t lie, especially to my daughter who is five. She sees through everything, so if she says “mummy, am I going to die?”, you just have to be truthful about it. I was absolutely terrified of death when I was little; I used to have nightmares about atomic bombs and nuclear war and UFOs.’

Yet, by the end of June, Christie would have completely ditched Mortality for an entirely different project revolving around another topic riddled with fear. Because You Demanded It was the hurriedly written show she took to the Edinburgh Fringe a few weeks later, a typically passionate and hilarious diatribe about the Brexit vote. ‘It was a huge moment in politics,’ says Christie of the EU referendum result. ‘It would have felt like a real failure on my part not to talk about it. I was gutted, but I needed to make sense of it. Lots of people I know voted Leave. More than any other show I’ve done, this one has been the most divisive in terms of audience reaction.’

Given that Christie has performed in public places dressed variously as an ant with goggles and 17th-century monarch Charles II, this is really saying something. But with the country still split almost straight down the middle on the issue of EU membership, she remains fearless in taking an avowedly partisan show to crowds who might not share her views.

‘Brexit has changed everything: the way we talk about politics and the way it’s reported,’ she states. ‘I might find myself agreeing on the EU with somebody whose views on everything else I hate. Then I’ll read an article or see someone “from the left” who I’ve always agreed with that’s pro-Leave, and I think, “how can you possibly think that?” Nothing is clear-cut any more. And even my core audience – lefty, feminist, Guardian-reading – is split, and that’s a reflection of broader society.’

Ever since her creative renaissance somewhere around 2010 (when audience apathy and critical ambivalence transformed into a double-sided wave of widespread adulation), Christie has been consistently hitting a rich seam of form which included a thoroughly deserved Edinburgh Comedy Award in 2013 with A Bic for Her. Given that her time on the British comedy scene has featured a wide range of reactions to her work, she is unlikely to take anything for granted.

Yet, not only has she been fully welcomed into the Fringe comedy fold, the outside world has collectively sat up and taken notice of her onstage achievements. As well as the Edinburgh Comedy Award, Christie has also claimed a South Bank Sky Arts Award, been a Women of the Year winner in the Red magazine awards, and received an honour as part of Marie Claire‘s Women at the Top awards.

Those last two accolades in particular have left Christie feeling extremely humbled. ‘The other women who were winning all those other awards were so amazing; they’d done absolutely extraordinary things across the board from charity, science, business and as human rights activists. It is brilliant and really nice to be recognised, but it doesn’t really affect anything and it shouldn’t either. It doesn’t make me a better writer or performer or mean that I’m better than anybody else; it just means that some people like what I do. I never think, well, “I can file stand-up comedy away now, I’ve sorted that out”. There’s always an awful lot to do. It’s a balance between enjoying it and celebrating and getting on with stuff.’

So, whither Mortality, the show about death which Christie had to mercilessly put down last summer? She suggests that it may well be resurrected for a future Edinburgh Fringe and national run. ‘I just thought there may be a show in all of that, in something we’re all facing but we don’t really talk about. I thought I might be able to make it funny. But then the Brexit vote came and death sort of became irrelevant.’

Written by Brian Donaldson in The List on 31st January 2017.
Filed Under: Because You Demanded It, Interview