Written by Tom Hackett in FestMag on August 18th, 2012 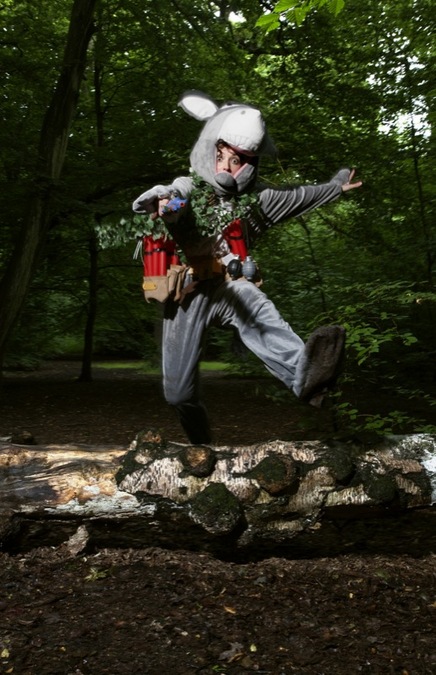 Bridget Christie has been riffing on the pigeonholing of female comedians for some time now.
In 2010 she donned an ant costume and complained about how “ant comedians” are treated as novelty acts on the circuit, expected only to joke about ant issues. She pulls off the same trick this year by arriving, even more surreally, dressed as a “war donkey,” with a similar roster of complaints on behalf of the “donkeyhood.”
So it’s with seemingly genuine embarrassment that she reveals that this show is a feminist one, directly and sincerely tackling “women’s issues.”

It’s a great credit to Christie’s rapidly increasing maturity and skill as a comic that this mixture of daft surrealism and political rhetoric works so well. She spends much of the gig in a series of silly costumes and still manages to convince us of the breathtaking mendacity of “Tory women” such as Louise Mensch.
She has some brilliantly immature fart jokes and still makes us pause at the true horror of a labia minora reduction. Very occasionally the subject matter is too serious for a joke to be made; at these points, Christie makes her own discomfort the source of humour, a neat trick that not many comics could pull off as well as she does here.

Almost inevitably in such a bold, barmy yet thoughtful brew, there are points where it doesn’t quite come together.
But Christie has really found her comic voice this year: she’s refusing to be anyone else’s idea of a ‘comedienne’, and carving out a highly original and entertaining niche in the process.