Written by Veronica Lee in The Arts Desk on August 20th, 2012 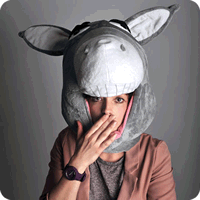 Bridget Christie’s resolutely daft shtick hasn’t always been my cup of tea, but this show, more focused than previous ones, has changed my mind about her comedy.

She comes on dressed as a donkey because, she says, she had to come up with a title for the show back in April, but then regretted it when she actually started writing the show and found there aren’t many donkey jokes – and besides he’s just another donkey and everyone knows that donkeys aren’t funny, in what she herself calls “a heavy-handed metaphor” about female comics.

She then takes off the donkey costume and dons an inflatable fat suit so that she can do a few daft Edwin Starr jokes about his hit “War”.

That gets the surreal stuff over with and she gets on with the show, which is about women’s rights – as Christie says, “Misogyny, like shiny leggings, has made a comeback.”

And in case you still think Christie’s show sounds a bit right-on, she also has the Fringe’s best fart joke by a country mile.

Written by Veronica Lee in The Arts Desk on 20th August 2012.
Filed Under: War Donkey, Review