Written by Veronica Lee in The Arts Desk on January 29th, 2012 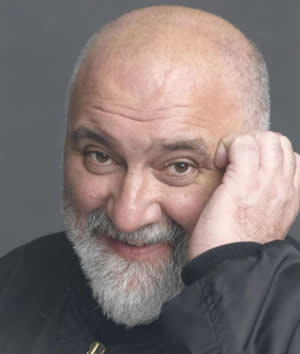 It has been 16 years since Alexei Sayle last performed as a stand-up, save the very occasional charity gig, so there was a proper sense of occasion at the Soho Theatre when he came on stage. The old lefty, brought up in a Stalinist household in Liverpool, was alternative comedy’s biggest name back in the 1980s and the scourge of the Thatcher government, so how would his sneering, disdainful political material fare now?

Very, very well, I’m glad to say, although in Alexei Sayle Presents (a month-long Tuesday residency) he’s not doing a full set, rather MC-ing to introduce a selection of younger acts from the circuit – although all are well known to Soho Theatre devotees. But the audience is here for him, and he is undoubtedly the star of the show by some distance.

A combination of life experience and a changing political landscape could have blunted the edge of the 1980s firebrand and his avuncular look – heavily bearded, thicker around the waist these days – might underline that fear. But he’s still as angry as ever about inequality and political wrongdoing, and his material – some new, some old – referenced the miners’ strike, Israeli incursions into neighbouring territories and the egregiousness of advertising, but strangely enough Margaret Thatcher only in passing.

He claims to be a kinder, calmer comic now, although Ben Elton, long derided by Sayle for selling out and making godawful shows with Andrew Lloyd Webber, still got it in the neck, and Sayle’s own recent career as a voiceover artist and sometime actor was deliciously mocked. He told us how comics supported the striking miners in 1984-85. But when comics, as voiceover artists, were later involved in a strike of their own, did the miners come to their aid? “Did they fuck!” He certainly hasn’t lost his timing, and if the manic presentational style has been dispensed with it has been replaced by a playfulness and a joie de vivre that make a better fit than the suits Sayle used to wear. 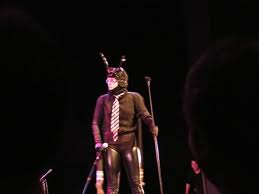 The three acts Sayle introduced were a mixed bag, and best among them was Bridget Christie (pictured right) in the guise of an ant. The act was slightly surreal – how often do see performing ants? – but had real political bite as Christie spoke about prejudice against ants, bemoaning the continuing “Are ants funny?” debate. Substitute “ants” for “women”, and you get the point of a very well crafted joke. It also had some delightfully daft moments, as when Christie did a series of one-liners about words that end in “ant”, which had the audience joining in with child-like enthusiasm. What do you call a comic with some very good material? Brilliant.
Simon Munnery is, for my taste, best seen in this mixed-bill – ie short set – environment, but even here I struggled to enjoy his surreal ramblings. Josie Long, meanwhile, should have had Sayle’s audience eating out of her hand with her material about fair taxation and free education, but – as is her wont – lost her focus early in what was supposed to be a 20-minute set but was almost double that. It says something when the funniest part of a comic’s set is a heckle (well done that woman) and Long, a genuinely nice person with passionately held views, would do well to learn from political comics like Sayle and Stewart Lee. Less really is more.

And back to Sayle, who wrapped up affairs with a funny and poignant story about a friend caught up in the 1982 Lebanon conflict. He told us that his wife had her doubts about him coming back to stand-up, as it would be, she said mock-pompously, “diluting the legacy”. But neither should worry – indeed that should be his comeback tour’s title, which I for one would be rushing to see…

Written by Veronica Lee in The Arts Desk on 29th January 2012.
Filed Under: Review

Previous Alexei Sayle Presents…
Next Standup Under the Stars: comics bounce back with a live show – and a sheathed mic