The fringe superstar returns with a mostly uproarious, sometimes sobering set in response to social injustices of every hue

Written by Brian Logan in The Guardian on August 11th, 2015 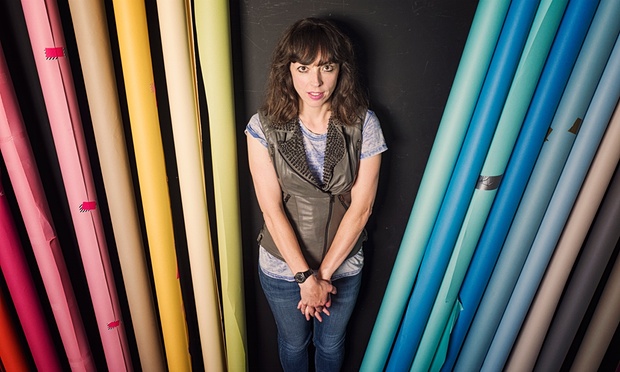 Is it a show? Is it a book launch?

Fringe superstar Bridget Christie returns to the scene, and timeslot, of recent triumphs with an 11am set comprising “50 minutes of new material followed by a 10-minute book signing.” Make that 45 minutes, and stretch your definition of new material to include passages from said book (extracted in the Guardian earlier this year), and you won’t be disappointed by another sparkling set of clownish political outrage from Christie. Her bulletins from the frontline of feminism and beyond have quickly become an indispensable part of the Edinburgh experience.

Feminism is lower in the mix this year, although with Christie, no subject precludes a self-mocking, bra-burning aside. There’s a great opener about how Nigel Farage is actually a full-spectrum character-comedy act, and, incidentally, jokes that “feminist comedian” is just a fictional alter ego for Christie, too. She then compares the Labour leadership contest (cue much microphone-to-forehead self-abuse) with a joyless flick through a kitchenware catalogue, concluding: “Jeremy Corbyn is the illuminated tap of British politics.”

All of which is delivered in Christie’s trademark fluster: her political indignation tripping up her sentences; the patriarchy’s every crime eliciting a gape of (only slightly) exaggerated dismay. One standout routine finds Christie proposing venues in which right-wing comics might now entertain their provincial fans, only to remember – each time with an elaborate dumbshow of mock surprise -that arts centres, women’s refuges and “the room where they keep copies of the Human Rights Act” have all been closed down.

Her horror at Britain’s rightward drift isn’t played just for laughs: there’s a sobering rallying call towards the end. There’s also a section on that gift to comedians, Rachel Dolezal, and on race more generally, around which Christie refuses to pussyfoot. It is exciting to see her politicised persona apply itself to the wider territory of social justice without diminution of potency or comic effect. As ever, she’s got lots to say and wastes no time saying it: there’s more matter in 45 minutes of Christie than an hour of almost anyone else. In short, it’s another cracking show from the current queen of crusading UK comedy.

Written by Brian Logan in The Guardian on 11th August 2015.
Filed Under: A Book For Her (The Show), Review

Previous Bridget Christie: A Voice of One’s Own
Next The “feminist comedian” finds new targets ★★★★