Written by Alice Jones in The Indepedent on August 11th, 2015 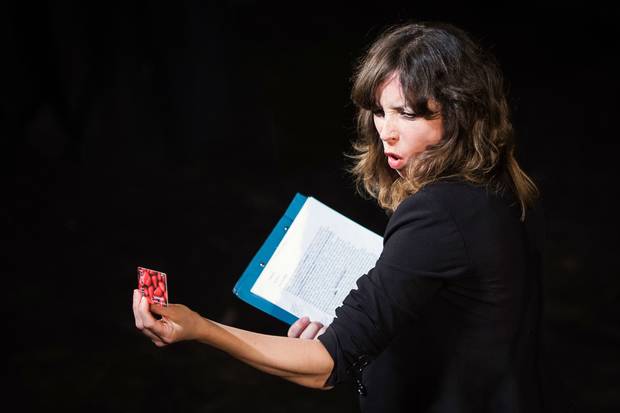 Bridget Christie spends a good deal of her new show poking fun at the “feminist comedian” label that has been attached to her ever since her award-winning, record-breaking 2013 show, A Bic For Her.

What if, she wonders, “feminist comedian” were just a character she’d adopted for “marketing purposes” – the better to sell her recently published Book For Her, say? How long could she keep that character up? Could she, like Nigel Farage, “the Borat of the European Parliament”, go through life without ever breaking the fourth wall?

In fact, in this new, up-to-the-minute and still rough-around-the-edges show, Christie proves that she can joke about just about anything. Farage, whom she pegs as a postmodern, subversive character comedian, is just one of her new targets. Others to fall foul of her uniquely entertaining, motormouthed, open-mouthed outrage include Jeremy Clarkson, Conservative welfare cuts, Caitlyn Jenner, the tampon tax, drama school, Rachel Dolezal, American gun laws and the Labour leadership race – “now open to animals, minerals and vegetables.”

She is clearly stretching herself, pushing herself to move on from the material she has made her own. A joke about right-wing comedians turns into a increasingly hilarious list of potential gig venues the government plans to wipe out – women’s shelters, the spare bedrooms of disabled people, “that room where they keep copies of the Human Rights Act.” An observation about her predominantly white audiences spins off into a thoughtful section about race and America.

There is still feminist material, of course. Fans will recognise a good chunk of it from her new book but it still benefits from her fizzing delivery. “This is What a Feminist Looks Like” t-shirts are dealt a subtle death blow, by means of a comparison to “I am Not a Racist” t-shirts. Then, almost as an aside, she comes out with a quite perfect take on a rape joke.

This is a less polished show than its predecessors and I’m not sure her call-to-arms about the tampon tax is her most successful closing coup, but Christie is not resting on her laurels. She packs more information, statistics, takedowns and gags into 45 minutes than most manage in a whole television series. Speaking of which, it’s about time someone gave her one of those.

Written by Alice Jones in The Indepedent on 11th August 2015.
Filed Under: A Book For Her (The Show), Review