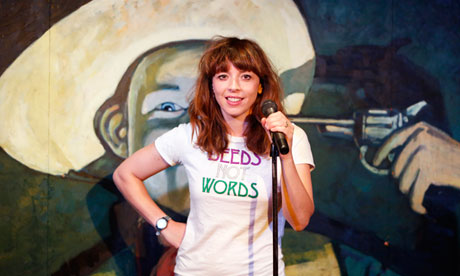 Bridget Christie spends most of this set zanily lampooning examples of everyday sexism: special ergonomic biros marketed for women, for example. Later she becomes compellingly irate in a way that makes the earlier tomfoolery look lightweight. Perhaps she decided to divide her hour this way to heighten the impact of the latter section; or perhaps audiences wouldn’t go for a whole hour of outrage. Maybe she felt more comfortable sticking, for a while at least, with the hyperactive physical comedy which has made her career a success so far. In any case, the result is an oddly undecided-feeling set.

A fantasy about Stirling Moss’s funeral goes on too long, and is freighted with so much clowning and late-night-Radio-4 wackiness that it almost—but not quite—buckles under the strain. By the middle of the set, Christie is wobbling a bit, not confident in her power to please a crowd that isn’t as restive as she seems to fear it is.

But the atmosphere changes when she starts to explain, with heavy irony, why she is so maddened by the fact that her children’s favourite magazines sit right next to Front on the newsagent’s shelf.
Her rant on this subject is very powerful, and the power is not diminished one jot when she then punctures the feeling of belligerence with a stab of surreal humour. Once she’s telling the story that really matters she jettisons the funny voices and elaborate goofiness, and if the laughs grow slightly less frequent, they seem more heartfelt too.

Written by Ed Ballard in Fest Mag on 9th August 2013.
Filed Under: An Ungrateful Woman, Review