She’s Got To Be Joking

Written by Stephen Armstrong in The Times on August 4th, 2013 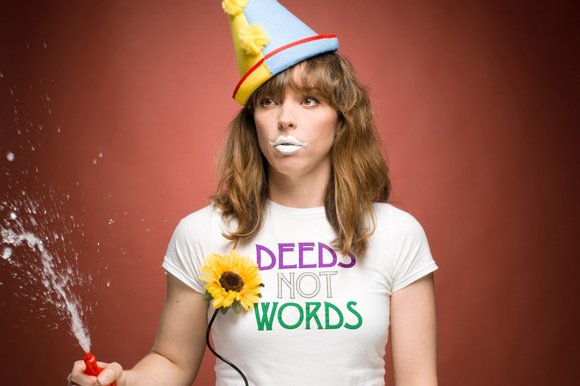 Right at the heart of Bridget Christie’s new comedy show – after she has taken down Stirling Moss, the Taliban and early 21st Century consumer capitalism – she gets the crowd whooping in a call and response riff on which lads’ mag has the best cover stars.
The man who shouts the winning aswer ends up in a detailed exchange with Christie, in which he willingly gives her the details of his bank account, despite it being obvious to everybody in the room that she only asked the question because she hates lads’ mags so very, very much.

There’s something about her subtle self deprecation and wry warmth that makes this moment – a fire-breathing assault, potentially, in the hands of more agressive comics – something engaging and fun. Indeed, the audience are so thotoughly charmed, the only heckles come from Christie herself as she fields imaginary attacks from men in the crod; “What’s that, sir? You’re quite right.” Now that being the debate about women being funny is long settled, Christie is destroying another casual myth about women by proving that feminism can be hilarious.

Not that she thinks it ought to be neccesary; “Why does a feminist have to be funny?” She shrugs. “It’s not the same for the numan-rights movement. I don’t remember people saying this was the key to Martin Luther King. ‘He’s got some great iedas, but not enough jokes. He’s just not funny enough – I think I’ll carry on being a racist.’
Given that, thanks to the internet, our world is borne along on a steady tide of humour and bile, Christie could be well placed to offer a peculiarly British form of political leadership. She has an uncanny knack for comic persasion and has been campaigning againt the lads’ mags for a few months, only to find the Co-op issuing its own ban last week.

In person, she’s warm and even motherly – we meet outside a coffee shop, and she asks solicitous questions about my health while briefly fussing over my drink. It would be utterly inappropriate, given the nature of her show, to dwell on her appearance – mentioning that she is slim and pretty, and that she delivers her put-downs with unquenchable sparkle, has nothing to do with her comedy.

Christie isn’t your typcal soapbox stand up. She arrived at feminism as a topic for her comedy a couple of years back because she was certain it would tank and she was getting ready to end her career. “I’d realised that my babysitter was earning more than me,” she sighs. Christie has two children with her husband. “So I had a moment where I thought, ‘ I will just do one last show, and I will step back’ – becuse I do love being with my kids.”

Her career-ending, feminist show, War Donkey, comparing women in comedy to donkeys in the First World War, topped eight or nine years of moderately successful standup where, as she says, “I would be doing things like the plague, viruses, and the Great Fire of London, various characters from 1605 to 1665, the Brontes and some insecs. I sold out and became a Radio 4 show.” This was Bridget Christie Minds The Gap, a second series of which has just been commissioned.

In War Donkey, she was on stage dessed as, well, a donkey, having previously performed as an ant and King Charles II. Her new show, A Bic For Her, dispenses with her previous surreal tricks. Sauntering on stage dressed as herself, she begins by explaining – as if to aliens – that a woman is ” a sort of version of a man”, then meanders from hands-in-pockets, notebook-referencing noncholance into righteous anger at the way, for instance, Bic deigns specially streamlined pink pens specifically for women. Her set piece on the Brontes struggling to compose their works because pens were ill suited to their womanly grip is a perfectly timed mix of slapstick and spleen that has been long absent from comedy stages heavy with the casual misogony of ironic rape jokes.

“I was amazed at that,” she admits, “The past three or four years, rape jokes suddenly seem to be OK. There are no subjects taht should be banned, but people should at least be brilliant if they’re going to do a topic like that. Most of the jokes are just lazy.”
She is prepared to walk on stage no matter how potentially hostile the crowd. “It’s stupid, but I won’t walk away,” she shrugs. “And that’s how I lost my two front teeth. This guy was trying to rob me in Brixton, and I just said ‘I’m not interested’, so he knocked my teeth out. I should have gven him the £5 I had on me, because these cost me about £3000 in the end.”

Her stubborn refusal to be cowed is, she argues, in part because she had to survve the backchat and hurly-burly of eight siblings while growing up – “Mum was pregnant for 81 months, basically.” She left school at 15, which wasn’t in her parent’s plan. “I wasn;t a naughty child, but I didn’t see that there was any point in it, and I just wanted to work.” She ended up working for the newspaper diarist Nigel Dempster.
“I was a errible diarist – I got some amazing stories because I didn’t seem like a reporter, and people felt comfortable telling me the most personal things. But I’m not very gossipy, so I wouldn’t write them up.”

Written by Stephen Armstrong in The Times on 4th August 2013.
Filed Under: An Ungrateful Woman, Interview