My Edinburgh: Bridget Christie – on Arthur’s Seat with a blanket and cattle

The comic talks pickled eggs and the joys of parenting as her new show, A Bic for Her, kicks off at the Edinburgh festival 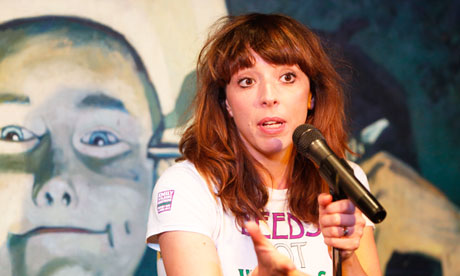 Hi Bridget, how are you coping? I’m good. I’m not nearly as stressed as I normally am.

Stress, pah. Tell us about the glamour. Oh, there’s no glamour. Unless you’ve got a big entourage you get on with. I’m not very sociable, though, so that would be my worst nightmare: loads of people I’m paying, but don’t want to talk to.

What’s your idea of a good time in Edinburgh? Arthur’s Seat with a blanket, loads of booze and loads of cattle to do some odd pagan thing. I’m not even a pagan. Edinburgh’s so exciting, though. It’s the most exciting thing I’ll ever do.

What makes it so special? It’s the buzz, isn’t it? All these people from all over the world doing mad things that you stumble across. The best thing to do is take a punt: read the guide and go to something with a terrible blurb. Never just see stuff that’s been reviewed well.

What’s the silliest thing you’ve seen? A student group that put on the worst, most offensive, most terrible show possible. I’d taken a bunch of people, and we couldn’t get out. We would have had to cross the stage to get to the exit and God, you can’t, can you?

And the silliest thing you’ve done? Someone once said to me I could stay with them, but I was only allowed to go in in the middle of the night and had to be really quiet. It turned out that not only was I not supposed to be there, but this other person wasn’t supposed to be there – and the woman who owned the flat woke up and caught us.

You were breaking and entering to sleep? I had to leave at four in the morning. It was my first Edinburgh.

Oh, wow. It’s OK, I managed to bump into my best friend afterwards.

Can anything top that in terrible Edinburgh experiences? I really like pickled eggs, and there’s a chippy on the Royal Mile where I’d already had three, but the fourth one was off. Not a little bit off, but like a delicacy off.

You played russian roulette with eggs? And I got unlucky.

So where’s the party in Edinburgh this year? Edinburgh’s a different story when you’ve got children. All my young friends come up and have so much fun. I mean, can you stop texting me with all the fun you’re having? I’m putting screaming kids to bed.

The Guardian on 5th August 2013.
Filed Under: An Ungrateful Woman, Interview