A Book For Her was published by Century Random House on 2nd July 2015.

It details Bridget’s ‘feminist epiphany’ – a fart in the Women’s Studies section of a bookshop in April 2012 – and her subsequent journey from the bowels of stand-up comedy to one of the most critically acclaimed British standup comedians this decade. If you’re interested in comedy & feminism, then A Book For Her is definitely for you.

If you hate both then you should probably give it a miss.
You can also download the book in Kindle or audiobook formats – all links are here.

A Book For Her Radio & Podcast Interviews. 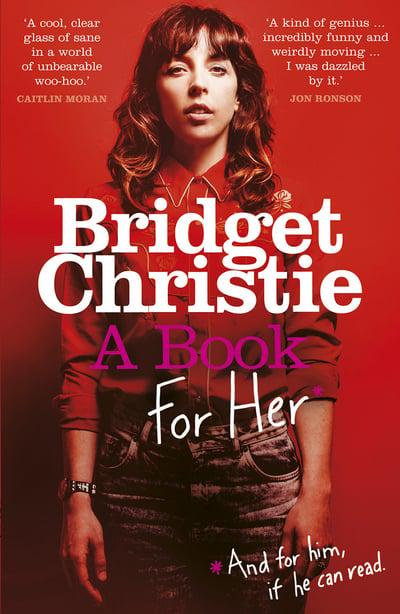 And here's an archive of 39 articles Bridget has written for various newspapers.

The Cereal Killer Cafe attackers should seek out the real villains of gentrification The Guardian, 28th September 2015

Why the suffragettes still matter: ‘they dared to act as the equals of men’ The Guardian, 19th September 2015

I’m having my Jeremy Corbyn moment. Have you had yours? The Guardian, 29th August 2015

We’re a nation of armchair activists – and that’s OK The Guardian, 11th April 2015

Bridget Christie on Edinburgh: ‘It’s not all about you. Apart from the reviews’ The Guardian, 12th August 2014

Reading and Brighton are said to be stressful places to live. So what? The Guardian, 27th October 2013

Do nurseries harm children or not? Either way, it’s all the poor’s fault The Guardian, 20th October 2013

The Are Women Funny? debate is as dead as Christopher Hitchens The Guardian, 1st October 2013

‘Normal sex’ is not having sex in a box in front of a studio audience. The Guardian, 24th September 2013

From Bullingdon to the Cabinet Office, David Cameron has rejected women – now it’s our turn. The Guardian, 17th September 2013