It’s a scientifically proven fact that wealth makes you obnoxious

Written by Bridget Christie in The Guardian on August 22nd, 2015

‘A man who ordered a takeaway during my show seemed genuinely baffled as to why I even brought it up. He was hungry and needed to eat. What the hell was my problem?’ 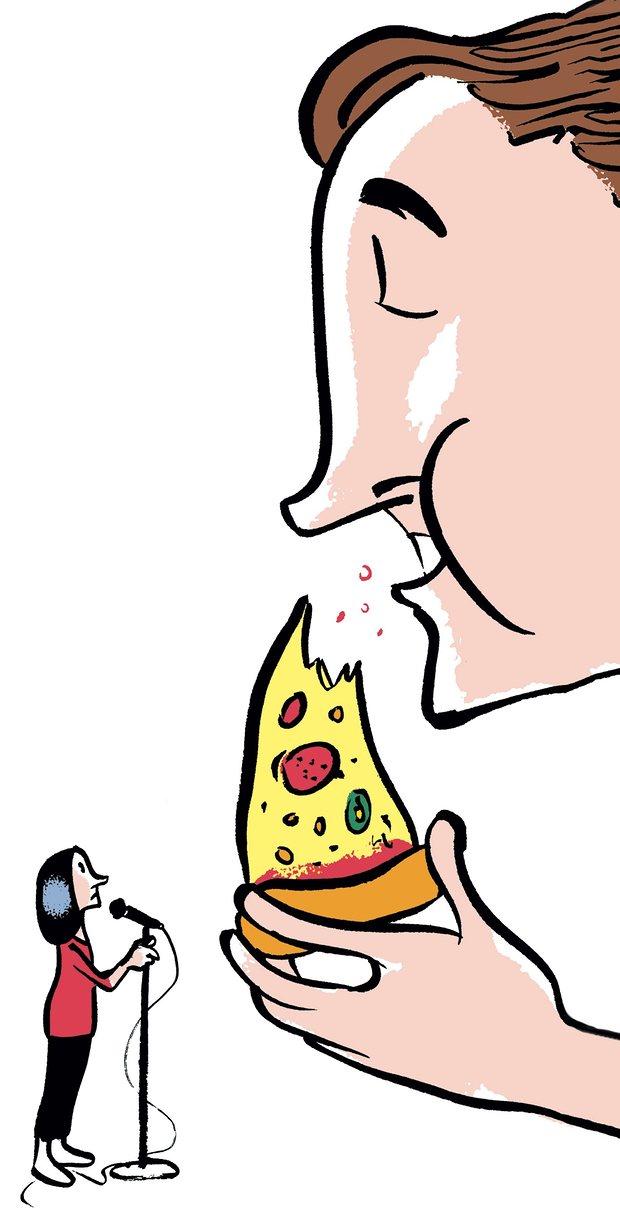 As a standup comedian, I have a heightened sense of other people’s behaviour. In a room of 500 people, I can sniff out the one checking their watch, yawning and stretching their arms above their head. There are a myriad ways an audience member can display their apathy towards you. One standup friend, Joe Wilkinson, saw a piece of chewing gum fall out of a man’s open, dribbling mouth while he was doing his best stuff. I’ve had a man in the front row order himself a takeaway.

I think society is ruder than it used to be, and I’m not alone in thinking this. Paul Piff is an assistant professor in the department of psychology and social behaviour at the University of California. Last year, he wrote a paper titled Higher Social Class Predicts Increased Unethical Behaviour. In layman’s terms, what Prof Piff is saying is, rich people are more likely to behave like twats than poor people are.

Piff proved his suspicions in a number of ways, many of them involving the use of hidden cameras. One of his experiments, which he shared during an unintentionally hilarious TEDx talk, meant getting some of his mates to stand at pedestrian crossings and monitor which cars stopped and which didn’t. Normal cars (ie ones that look like their sole purpose is to transport people safely from A to B without exploding) stopped – which, incidentally, they were legally obliged to do. “Status cars”, such as 4x4s, convertibles, sports cars, chariots and the Diamond Jubilee State Coach, did not. Piff had proved, beyond any shadow of a doubt, that people who buy expensive cars enjoy killing pedestrians, which definitely qualifies as unethical behaviour.

Another of Piff’s films showed two young men playing a rigged game of Monopoly. One player was given an unfair advantage: more money, two dice, a crash course in Received Pronunciation, a massive throne to sit on, an ermine cloak and the Sovereign’s Orb. The behaviour of this player changed rapidly. He started playing in an incredibly annoying, obnoxious way.

The most fascinating part, for me, was that, even though he knew he was at an unfair advantage, the player still believed he had won the game through personal skill. I thought immediately of George Osborne cutting the maintenance grant for Monopoly players from low-income families, and how this meant that working-class kids would now always lose at Monopoly, so won’t even bother trying to play any more.

Piff believes that being wealthy can make people less ethical, more selfish and less compassionate. “The rich are way more likely to prioritise their own self-interests above the interests of other people,” he says. “It makes them more likely to exhibit characteristics that we would stereotypically associate with, say, assholes.” Yes, that’s right. There is a professor, called Piff, who used the word asshole in an academic study.

I’ve encountered a lot of assholes recently. And I have noticed, with alarmingly regularity, that when I call people out for, say, walking into the road in front of my car without looking because they were on their phone, I am verbally abused in return. The man who ordered his takeaway during my show seemed genuinely baffled as to why I even brought it up. He was hungry and needed to eat. What the hell was my problem?

We are living in an age of narcissistic entitlement, and I don’t think this is purely down to wealth or privilege. Technological advances, easy credit, bad parenting and pizza restaurants’ willingness to stock every conceivable topping has created a world in which everything is possible and available, where there is immediate and unlimited choice – except in the case of the Labour leadership, where our options have been severely limited.

In a recent documentary about the police, a female officer said she’d noticed a big change in young people’s behaviour, which she put down to bad parenting, a lack of discipline and contempt for authority figures. She said that because we don’t say “no” to our children, and instead use tantrum-averting language (“Well, I’d rather you didn’t punch me in the face repeatedly, darling, because it makes mummy upset”), young people don’t know how to respond to being reprimanded: they go into meltdown.

We interact with each other less and less. We shop online, communicate online, we watch bands and sunsets through our iPads and don’t care about the people standing behind us. We’re forgetting how to behave in the physical world. I don’t know how we address this. But a good place to start might be to call our children assholes when they’re being assholes. I’d also suggest arresting anyone who orders a takeaway during the punchline of a show.

Bridget Christie is author of A Book For Her (Century, £14.99). She will be appearing at the Leicester Square Theatre from 16 November-2 December.

Previous We’re a nation of armchair activists – and that’s OK
Next I’m having my Jeremy Corbyn moment. Have you had yours?