We’re a nation of armchair activists – and that’s OK

Written by Bridget Christie in The Guardian on April 11th, 2015

You don’t have to lead marches or dedicate your whole life to a cause to make a difference, says the comedian and writer 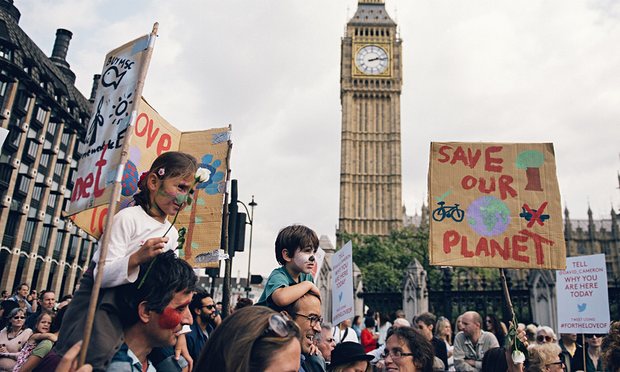 I came to politics quite late in life. My Damascene moment was a man farting in the women’s studies section of Waterstones around three years ago. To many people this would’ve just been unpleasant, but it ended up being my political awakening. A chemical composition of nitrogen, hydrogen, carbon dioxide, oxygen and methane introduced me to Simone de Beauvoir. This man’s fart, emitted in a public space – and in a women’s studies section no less! – displayed a total lack of empathy for any feminists that might be lurking there. If even women’s studies sections in bookshops were under attack, then what hope did actual women have?

I wasn’t politically engaged growing up, but became more so as a teenager. I was the youngest of nine kids, and we were all very opinionated. I supported Greenpeace and I was vegetarian – not because I thought eating animals was cruel and disgusting, but because I didn’t like the idea of meat. Later I thought: I’ll just say it’s cruel as well.

My mum, who died in 1997, was in the unions and supported the Welsh miners. She was a spokesperson for the National Union of Public Employees and was really active in the community. How she found time for doing all of this as well as bringing up nine children and keeping down a job is beyond me. My parents were lifelong Irish Catholics and Labour party supporters and Tory haters, but they didn’t talk about politics with us kids. So politics and feminism weren’t things I grew up with. The only march I ever went on was for the Motorcycle Action Group, during my “biker” period, which ran from 1987-96. I can’t even remember what it said on my placard. Probably something like, “Hey car drivers. Stop running us down. Cheers.”

I started talking about feminism in my standup routines in 2009. At first, I thought it might be alienating, so I did it from the perspective of an ant instead, talking about how difficult it was being an ant comedian. Then gradually, over the next four years, I gained enough confidence to talk about feminism from the perspective of a human woman. I met Leyla Hussein, an FGM survivor and anti-FGM activist, and we hit it off straight away. She taught me that no subject should be off limits – you just need to be clear who or what the target is. I worried that I didn’t have a right to talk about FGM as I don’t come from an FGM-practising community, but Leyla believes you can talk about whatever you like, regardless of whether you’ve been directly affected. Her wisdom freed me up, and I wrote two BBC Radio 4 series about feminism, Bridget Christie Minds the Gap, and my Edinburgh shows A Bic for Her and An Ungrateful Woman.

Having said that, you’re not going to please all of the people all of the time. We are all fallible but for me, failure is not trying and slightly misjudging something, it’s not trying at all. When I feel that I’m not doing things properly, or that I’m not doing enough, or that someone else is doing something better, I remind myself of a quote from a female Olympic cyclist, who said, “When I’m racing, I don’t look at who’s behind me, or in front of me, or coming up beside me. And if I don’t win the race, but I beat my own time, I’ve won.”

It’s important not to beat yourself up about what you’re not doing. I used to bin lads’ mags, which were inappropriately displayed at toddler height, whenever I went shopping because that’s all I had time to do. Obviously, it’s a good thing most human rights activists and campaigners don’t have my attitude, otherwise nothing would get done. But you don’t have to lead marches or front campaigns, or dedicate your entire life to a cause. Your activism – whatever form it takes – is the right activism for you.

Modern technology means that these days we don’t have to get dressed, or knock up a placard, or chain ourselves to railings to make a difference. E-petitions have turned us all into armchair activists, and there’s nothing wrong with that.

We’re all doing our own little bit. And if we all do a little bit, then together it’s a big bit.

How I did it: Leyla Hussein on her 10-year campaign to put FGM in the spotlight

I’ve been campaigning in support of girls who have undergone FGM or are at risk of it for more than a decade, and widespread recognition of the phrase “female genital mutilation” is one of the greatest advances we have made.

We’ve had to use tactics such as the vagina tent we put up on the South Bank to coax people into engaging. Passersby were intrigued by the pink tent and the vulva-shaped cupcakes we handed out – had they known that once inside they would be given a lecture on FGM I doubt many would have stopped. We are campaigning about a form of child abuse, pure and simple.

One FGM survivor I spoke to referred to what she’d undergone as “butchery” – we’re talking about clitorises being removed, labia being cut away or stitched together, often by unqualified practitioners.

Some people assume FGM is a religious practice, which stops them criticising it for fear of causing offence. But it isn’t – it’s simply a brutal custom used to control female sexuality. A petition last year attracted well over 100,000 signatures, which led to a parliamentary debate and, ultimately, amendments to the Serious Crime Bill aimed at identifying and preventing FGM.

There’s a long way to go, but steps like these are encouraging. The cycle has been broken in my family – I made sure my daughter didn’t undergo FGM, making her the first girl in our family to be free of it. I believe we can inspire others to have the courage to do the same.