Written by Bridget Christie in The Guardian on October 13th, 2013 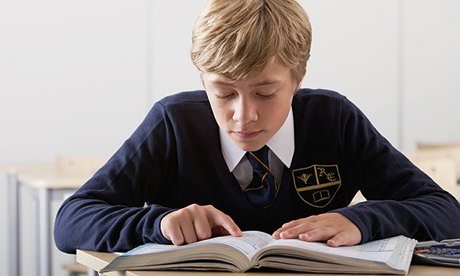 A survey by the OECD has put England close to the bottom for literacy among young people in developed nations. Photograph: Alamy

According to a really expensive study carried out by Noel Edmonds’ Sky1 quiz programme Are You Smarter Than a 10 Year Old?, millions of English adults cannot read, write or add up better than primary-school children. Furthermore, one in six adults can only just about decipher a menu (the type you find in a greasy-spoon cafe, not one of Heston Blumenthal’s – even Heston can’t read those).
But even if they can order an egg, because it only has three letters in it, they still don’t understand quantities.
Jeremy Hunt, the health secretary, asked Edmonds if this was why we were all so fat and a drain on the NHS, and Noel said it was, yes. Hunt smirked, and then they went off to bounce on the trampoline for a bit because all the swings were taken.

Poverty and social inequality have been blamed for the results of the survey, which – back in the real world – was carried out by the OECD and put England close to the bottom in literacy and numeracy among 16- to 24-year-olds in developed nations. This is despite Michael Gove, the education secretary, and his badminton partner Toby Young doing all they can to improve literacy and numeracy for their own children, and the children of all their friends.
But this problem pre-exists Gove. It doesn’t pre-exist Young though, who has been around since the first school opened here in 597. That’s why he feels qualified to keep going on Newsnight to talk about education. It also explains why he has a painting of a really old-looking baby in his attic, and his silly, old-fashioned views on women.

Professor Chris Husbands, director of the Institute of Education, said: “Even after 150 years, we still haven’t worked out how to educate the masses in this country.” How old is Prof Husbands? Perhaps he needs a break, at his age. Anyway, I don’t agree with Husbands, in theory. Or the professor, for that matter.
I think the elite has worked out exactly how to educate the masses in this country.
Don’t! Keep us illiterate!
Like the pope did in the good old days before that pesky reformer Tyndale ruined everything! Don’t dilute the elite! What will we call ourselves if we allow the masses to infiltrate us? The Massite? A fair and equal society? Look at the state of Scandinavia! It will never work. Besides, there are only so many cabinet positions to go round.

Anyway, I’m not convinced we needed an survey to find out how illiterate we all are.
Apparently it cost £567,000,231,089,222,785.21 just to get the numeracy figures.
Couldn’t Edmonds have just popped down the high street and looked at some shop signs that will have presumably been checked by a number of people, including a professional signwriter, and still ended up as “Bobs’s Fish and, Chip’s”? Edmonds could also have watched something about “real people” on Channel 4 (not the news), read a trendy children’s book that includes double negatives to be cool, kooky and cute, or gone to the cinema to see The Pursuit of Happyness, Inglourious Basterds or Biutiful. These Hollywood movies are of course misspelt on purpose to be amusing, but with the US coming out in the lower half of these literacy tables, it’s not helpful.

The survey also doesn’t tell us how many of these illiterate 16- to 24-year-olds are genuinely illiterate, or how many of them just pretend to be illiterate as an affectation to be more popular, or to give the impression of being less dangerous than they are. Like George W Bush, Katie Price and Boris Johnson do.

Our illiteracy may also be down to laziness generally. I notice it all the time. Drivers don’t indicate any more (can’t be bothered, I know where I’m going); we drag our heels along the ground when we walk (I’m still getting to where I need to go, why bother picking my feet up?).
Perhaps poor grammar is just another part of this general apathy.
We’re all guilty of this to some degree. I went to France recently and instead of learning how to say “Excuse me, is this fish boneless?” to a lady selling fish, I just pointed at my two children then mimed having a choking fit. She knew immediately what I meant.

I left school at 15 with two CSEs. One in drama and one in typing, in case the acting didn’t work out.
It didn’t, by the way, and I must say the typing has come in very handy for these columns, so I’m not as stupid as all those teachers told me I was after all. Anyway, this was in the mid-1980s, when even a school dropout like me could watch University Challenge without glazing over, and even manage to get one or two questions right. I don’t think this is the case today. But that’s more down to Paxman’s confidence-sapping impatience than our failing state schools.

The disparity in our education system between the rich and the poor is a national disgrace, and begins even before our children are born – by elective caesarean section in the first week of the month in order to get a place in a top London prep school. (This story ran in the Daily Mail so may or may not be true, but it sounds feasible.)

I took my education for granted, which shames me now, especially when I think of the lengths Pakistani schoolgirls go to for theirs. But this isn’t Pakistan. Girls have the same educational rights as boys here. It’s not gender that divides our children’s opportunities to learn and better themselves here, but their social backgrounds.

Previous The Are Women Funny? debate is as dead as Christopher Hitchens
Next Do nurseries harm children or not? Either way, it’s all the poor’s fault