Written by Bridget Christie in The Guardian on September 28th, 2015 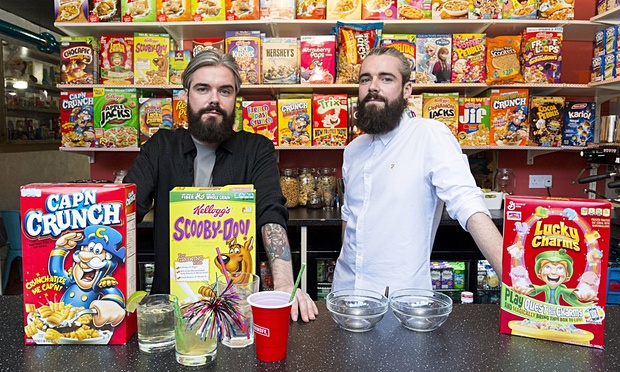 On Saturday night, the Cereal Killer Cafe – a trendy east-London eaterie owned by Gary and Alan Keery, two hipster brothers made entirely from breakfast cereal and beards, and whose target demographic is suspected murderers facing mornings so chaotic with trying to avoid arrest that they have to breakfast on the run – was attacked by hundreds of anti-gentrification protesters.

The cafe, which charges up to £4.40 for a small bowl of the cremated remains of convicted retro American serial killers (milk, for an extra 60p, is sourced from the lactating mothers of a local NCT group), was ambushed by anarchists who threw paint and cereal at its shop window and spelled out the word “scum” on it, using Alphabites multigrain. Footage of the attack, filmed by a member of staff inside the cafe (who didn’t know the address of the cafe and so couldn’t tell the riot police where they were), showed protesters outside wearing pigs’ masks and carrying flaming torches.

One of them, in a hi-vis orange jacket, is seen approaching the shop window shouting “Fuck cereals! What’s wrong with eggs or toast?”, or something like that – I couldn’t hear him properly because he had a mask on and was outside. Another is seen holding up a bunch of balloons, but there wasn’t anything written on them, so I’m not sure what the balloons signified. Perhaps, inspired by the millions of balloons released on VDay for One Billion Rising (the biggest mass action to end violence against women in human history) and incensed by the opening of the nearby Jack the Ripper museum, the five balloons signified each of the five canonical victims of the local vintage serial killer. The museum, which charges up to £4.40 for a small bowl of Cheerios, was originally billed as a project to “recognise and celebrate the women of the East End”, showcasing 150 years of the social history of London’s women, but actually just ended up celebrating the horrific murders of London women, by a man, which is not really the same thing. Either that, or it could have just been the protester’s birthday.

The event, billed as the third “Fuck Parade”, was organised by the anarchist group Class War. I had a look at their Facebook page, which states: “Our communities are being ripped apart – by Russian oligarchs, Saudi sheiks, Israeli scumbag property developers, Texan oil-money twats and our own home-grown Eton toffs,” which would explain why they were dressed as pigs. Luckily for the police, no one from the Piers Gaveston Society joined the protest, mistaking it for one of their own parties, or they’d have been investigating an entirely different and far more serious crime.

I’m sure the majority of the protesters had noble intentions – to protest against rising rents in the capital, social cleansing, exploitative landlords and property developers, who are tearing communities apart, and a government that seems to actively encourage it. Some of the most affluent areas in London are becoming like ghost towns, as foreign investors buy properties and leave them vacant, while the majority of Londoners are forced out.

Gentrification is a hugely complex issue, and I agree with the fundamental point the protesters are making (even though I have personally financially benefitted from the gentrification of my own area and am therefore a total hypocrite) – but it can’t be remedied by the intimidation and ousting of a collection of expensive breakfast cereals and their hirsute curators.

The Cereal Killer Cafe is in one of the poorest boroughs in Britain, Tower Hamlets, where the proportion of children living under the poverty line has reached nearly 50%. Maybe Class War should stage their next protest outside the offices of the Department for Education, where it was recently indicated that the universal infant free school meals programme could be cut as part of George Osborne’s November spending review. Or those of London mayor Boris Johnson, who has just called in the Bishopsgate Goodsyard development in Shoreditch and removed the two local councils from the planning process, giving City Hall the final say on the future of the 11-acre development, which involves two skyscrapers of 47 and 43 storeys respectively. Johnson is unlikely to be as concerned about the height of the buildings, the lack of affordable housing or the worries of local residents. Surely, these are the real villains, not a couple of beatniks whizzing down Brick Lane on MonoRover R2 Two-Wheel Self-Balancing Electric Scooters with detachable vintage Teasmades.

The attack on the cafe reminded me of a protest by the People for the Ethical Treatment of Animals (Peta) against a cheesemonger in my home town of Gloucester. The shop had been targeted for providing Gloucestershire’s annual cheese rolling competition with the 8lb double Gloucester cheese that Gloucester people then chase down the death-defyingly steep Cooper’s Hill. Vegans branded the event “unethical” and said the cheese should be replaced with a non-dairy soya alternative. I pointed out to Peta that we’re not chucking a cow down the hill, and that they should target factory farmers or ivory poachers instead. Pick your targets, Class War. Purveyors of breakfast cereals are not the enemy.

Bridget Christie will be appearing at the Battersea Arts Centre, London SW11 on 8 October and the Leicester Square Theatre, London WC2 from 16 November to 2 December.

Previous Why the suffragettes still matter: ‘they dared to act as the equals of men’
Next Jilly Cooper’s first lesbian sex scene? I can’t wait