Written by Brian Logan in The Guardian on November 17th, 2021 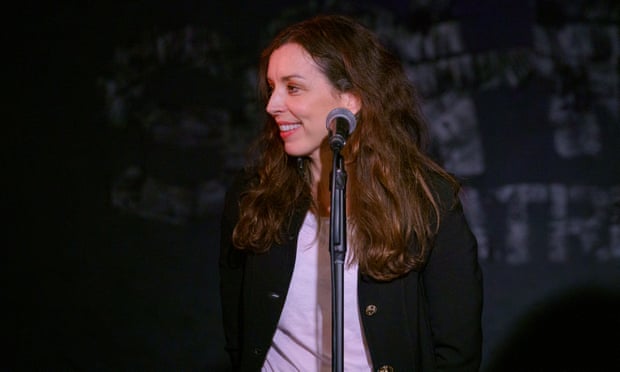 A handful of times in the opening stages of Bridget Christie’s new show, she stumbles over or forgets her lines. The critic sharpens his pen: is Christie under-rehearsed or – perish the thought! – might her supreme comic powers be on the wane? But not for the last time tonight, the comedian is a step ahead of the crowd. This show is about life as “a 50-year-old menopausal woman”, and hesitation, forgetfulness – and hot flushes – are all part of its carefully worked-out modus operandi.

Even aside from its underexposure as a topic for public conversation – a point she makes most emphatically – could there be a topic better suited to Christie’s style of comedy than the menopause? Once again, this is a show that perfectly marries blustery campaigning material with blithering clown comedy – the indignities, the scattiness and the sudden, ahem, “power surges” of that midlife experience all perfect fodder for an act whose comedy already worked to scatty, surging rhythms.

Which isn’t to say Christie is cruising along in her comfort zone. Far from it: one routine after another finds her making us laugh in surprising ways, and the climactic section – about a flasher – is a mini-masterpiece, flowering from inauspicious beginnings into a routine that calls back to jokes, motifs and arguments from the whole preceding hour.

Before that, there’s just so much to enjoy. One section on the invisibility of women over 50 rejoices in the comedy of cartoon fury while still lending weight to the original complaint – a classic Christie trick. Another compares the bad-faith comedy of Dave Chappelle and Ricky Gervais to Christie’s mother’s experience of giving birth to Bridget – not an analogy you can imagine any other comedian making, and all the funnier for it.

There’s also a tart aside about Fleabag, and a sublime setpiece about Christie’s current failure to remember the most basic words. She dramatises this fraying connection between her brain and the tip of her tongue as a frenetic dialogue between herself and her alarmed kids, a device deployed again in tirades about Tupperware and an incident in a Homebase car park – both hilariously overblown, with Christie waggling about, arms everywhere, like an inflatable tube man. That she’s behaving like this while mothering just multiplies the comedy.

Even the show’s relative weaknesses reveal themselves to be part of the larger plan. The Charles II bit feels like recycling from a previous show – but that does serve Christie’s point about crumbling menopause memory. A gag about Boris Johnson’s lying feels a bit obvious, but she keeps reapplying it, to different iterations of male entitlement, with a greater comic (and ideological) yield each time. Then there’s the stunt with which she opens the set, which doesn’t really fly – until you realise that its lack of impact is integral to the joke Christie keeps telling, ever more amusingly, for the first 10 minutes of the show.

She is, in short, wise to us, even when we think otherwise – and it’s a keen pleasure to be in the company of an act in such control over her rich, playful material. And all in the service not only of great silliness and self-mockery, but of Christie’s liberating public-information agenda. The menopause needn’t be anything to fear, it may even be liberating – and, on the evidence of Who Am I? it in no way hinders the creation of joyous, fervent and complex comedy shows.

Written by Brian Logan in The Guardian on 17th November 2021.
Filed Under: Who Am I?, Review