I reserve the right to give all politicians a good kicking

Bridget Christie’s feminist stand-up routines attract sell-out crowds — and everybody is a valid target for her biting humour, she tells Veronica Lee 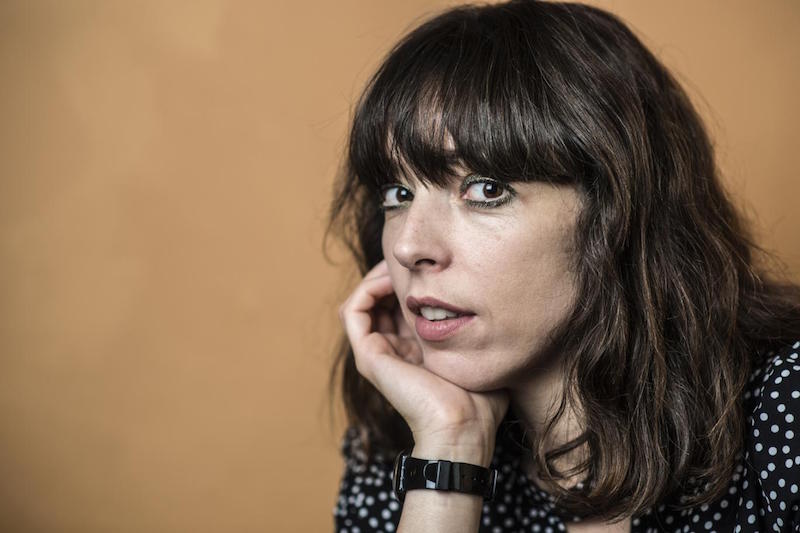 Disarming honesty: much of what Bridget Christie says is heavy on the irony and comes with a dollop of self-deprecation Daniel Hambury/Stella Pictures

As I wait for Bridget Christie to join me in a café on Newington Green, I notice that it’s next door to the Unitarian church where Mary Wollstonecraft, the great advocate of women’s rights, used to worship. When the comic — whose breakthrough show was a paean to feminism — arrives, I say how fitting that is. “It’s not deliberate,” she says with a laugh. “I live a few minutes away. But London’s great, isn’t it? Everywhere you look there’s something interesting or unexpected.”

We’re here to talk about Christie’s new show, A Book For Her, which premiered at this year’s Edinburgh Fringe and is now running at Leicester Square Theatre. Her 2013 show,

A Bic For Her, won the prestigious Foster’s Edinburgh Comedy Award; the follow-up, An Ungrateful Woman, received another slew of five-star reviews and broke audience records at Soho Theatre.

Her equally well received latest outing is a stand-up/book-signing hybrid — the live material was inspired by Christie’s A Book For Her (and for him, if he can read), published earlier this year and which she signs copies of at the end of each performance.

The book is part memoir, part history of feminism, part material about being a feminist at large. Christie wrote it, she says, “because I was asked”, and because success came a decade into her comedy career. “I got in under the radar,” she says, “and I want to take every opportunity possible.”

That answer is typical of our conversation, and indeed the style in which the book is written — disarming honesty, heavy on the irony with a dollop of self-deprecation — which in person is delivered in a garrulous, scattergun style.

Her previous two shows hilariously attacked everyday misogyny but A Book For Her covers broader territory and includes material about the American race activist Rachel Dolezal (a white woman who passed herself off as black), Nigel Farage and the Labour Party’s travails. Christie takes things that shouldn’t be funny — female genital mutilation, anti-rape pants — and riffs on them to build, layer by layer, wonderfully surreal but biting routines.

By its nature, the new show is evolving; since the Edinburgh run, for instance, Jeremy Corbyn has been elected Labour leader and Farage’s star has dimmed.

Christie is unwilling to say where her vote goes — “I reserve the right to give them all a good kicking” — but her politics are Left of centre and she also supports the aims of the recently formed, non-partisan Women’s Equality Party.

What does she make of Corbyn’s election? “Well, put it this way, I can see him on telly without wanting to punch the screen. I think wherever you stand, Left or Right, it has to be a good thing because he has enthused a whole generation. He’s made politics much more interesting by creating unease in both major parties, and that’s exciting, isn’t it?”

Christie is pleased that so many of her Edinburgh audience didn’t necessarily share her politics. “A lot of older Conservatives came because they had read something nice about me – and then they turn up and find [Viz’s] Millie Tant from the Eighties,” she chuckles. “But they stayed, and that’s great because I’m not preaching to the converted. The challenge for me is to take the subjects I’m interested in and make them funny, so nothing would be achieved if they weren’t laughing.”

Despite being a political comic, Christie doesn’t “feel a responsibility to comment on everything” and, unlike most stand-ups, she’s not on social media. “There has to be a distinction between your work and your personal life, and on Twitter those lines are blurred; you’re never ‘off’.”

Although she has experienced more than her share of misogyny, Christie says it’s not trolls who keep her off Twitter. “I’m a sitting duck but I’m over the abuse now. I think it’s funny because it’s so pathetic — but it’s not OK just because I have learned to deal with it.”

Christie, 44, grew up in Gloucestershire, the youngest of nine children in an Irish Catholic family. “Because I was the ninth I may have wanted some attention,” she says, drily. She studied drama at the Academy of Live and Recorded Arts in Wandsworth and, while trying to establish herself as a performer, took office jobs to pay the rent, including a stint on The Daily Mail diary — an experience she later turned into a show, My Daily Mail Hell.

Despite the show’s title and the paper’s politics, she remembers the time fondly — and former colleagues recall her in the same way. She drifted into comedy in 2003 when she met fellow comic Stewart Lee, whom she married in 2006, but it wasn’t until 2013’s show A Bic For Her that she made her breakthrough. She had, I wrote at the time, finally found her voice and her subject matter in feminism.

To add to the Foster’s gong, Christie has since received several more, including two last month — one of Marie Claire’s Women at the Top awards and one of Red magazine’s Women of the Year.

“The other women were phenomenal — scientists working on sophisticated cancer treatments, people who work with gangs, an expert on human rights, a woman who walked across the Arctic on her own — and me, there for telling jokes.”

Her two children — a son aged eight and a daughter, four — find the awards hilarious. Her sideboard must be groaning… “Stew bought me a cabinet,” she says, and collapses into giggles. “I’m a bit embarrassed by it. It’s from Ikea, it’s not posh or anything but it’s glass and his awards are in it too, of course.” I ask who’s ahead in the gongs stakes and she shrieks in mock reproval: “Can you imagine how that would sound if I started counting them?”

In general Christie and Lee don’t talk about each other in interviews and much remains frustratingly, if amusingly, off the record in our chat. On stage, however, they talk about “my husband” and “my wife”, where the quotation marks are deeply ironic. “The stuff we do suits the characters we assume on stage and if I’m talking about ‘my husband’ saying something, I have written it, and vice versa,” Christie says. “Our domestic set-up is constantly amusing and now the kids are at an age where their sense of humour is coming through, but we just can’t go there. Maybe one day.”

In the meantime, we’ll have to be content with A Book For Her, more writing and radio shows, plus the possibility of some acting. And what about politics — could Christie be persuaded to stand for election? “Never.”

Previous The Independent Recommends…
Next A Book For Her, London.