Written by Brian Logan in The Observer on August 24th, 2013 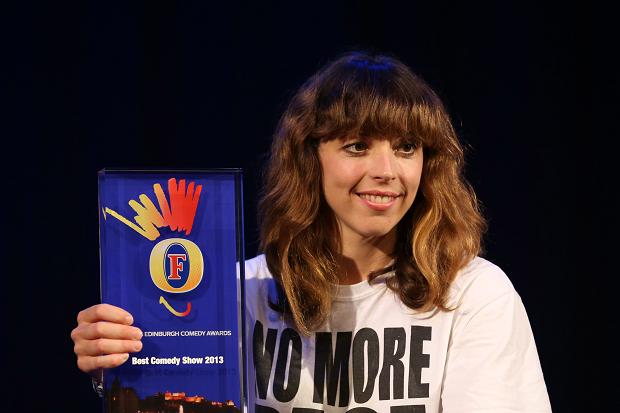 It was a stand-out moment for female standups. The feminist Bridget Christie won this year’s Foster’s Edinburgh comedy award, the most prestigious prize in British comedy.

Christie secured the annual £10,000 prize for her show A Bic for Her, which takes aim at everyday sexism, chauvinist sports commentators and the prominence of lads’ mags on newsagents’ shelves.

The prize was awarded by Steve Coogan, a former winner in Edinburgh, and the American clown Doctor Brown, who won last year. Other winners of the prize – formerly known as the Perrier Award – include Frank Skinner, the League of Gentlemen and Daniel Kitson.

Nica Burns, the West End theatre producer who runs the awards, described Christie’s show as “beautifully written, delightfully delivered. Whilst high on the laughter count, [this] show about feminism also gives us something to think about.”

Christie’s victory is only the third for a solo woman standup, after Jenny Eclair in 1995 and Laura Solon in 2005. Her triumph caps a year in which, as one critic (and comedy award judge) wrote, “the fringe has found feminism”.

Theatre shows addressed the gang rape in Delhi in 2012 (Nirbhaya, which won the Amnesty Freedom of Expression Award), alongside plays about a series of influential women, including Russian journalist Anna Politkovskaya, Ukrainian politician Yulia Tymoshenko and the British empire-builder Gertrude Bell.

In the comedy programme, the majority of acclaimed shows were by women, including the visiting American standup Tig Notaro, British standup and actor Sara Pascoe, and the extraordinary Adrienne Truscott, one-half of the New York burlesque double-act The Wau Wau Sisters.

Her debut standup show, Asking for It, performed naked from the waist down, critiqued the fashion for rape jokes in comedy. Truscott was rewarded with the Foster’s panel prize, which recognises performances that best distil the “spirit of the fringe”.

Christie, 38 is a 10-year veteran of the comedy circuit who began standup while working on the diary desk of the Daily Mail. Until now, her work has been whimsical and surrealist: in her 2008 show The Court of King Charles II, she performed in the character of the Restoration king; in 2010, she pretended to be an ant.

She began to address feminism on the fringe last year, and this March Radio 4 broadcast her series on the subject, Bridget Christie Minds the Gap. (A second series has been commissioned.)

Of A Bic for Her, Christie told one newspaper: “I decided to write a show about the emancipation of women and put it on at 11 in the morning. I didn’t think anyone would come, but the audiences have been unbelievable.”

It’s the first time Christie has tackled sexism head-on in her live work, and critics agreed that, in doing so, she has found her voice. Her book on the subject is now in the pipeline.

The best newcomer prize at the comedy awards was won by John Kearns for his show Sight Gags for Perverts, which was performed on the free fringe.

Hailing him as “definitely a star of tomorrow,” Burns called Kearns “an anarchic one-off …He brings a spirit of fun and unpredictability amongst the laughter.”

Kearns claims a prize of £5,000, and his place in a list of winners that includes Sarah Millican, Tim Minchin and the Mighty Boosh.

All winners and nominees can now be seen in a showcase awards performance at the Pleasance in Edinburgh on Sunday night at 8.30pm.

The awards were selected by a panel of 10 members of the public, industry figures, critics – who this year included Tania Harrison, head of arts and comedy at Festival Republic – and Ben Boyer, head of development at Sky Comedy 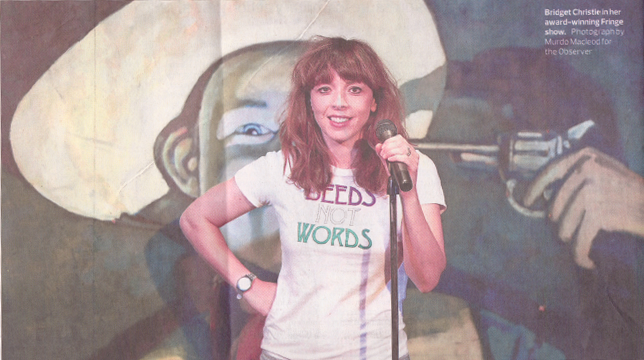 Written by Brian Logan in The Observer on 24th August 2013.
Filed Under: An Ungrateful Woman, Feature