Heard the one about the rapist? Not now the Fringe has gone feminist

THIS year's Edinburgh Fringe has brought the rise of the rape joke to a staggering halt.

Written by Vicky Allan in Herald Scotland on August 11th, 2013 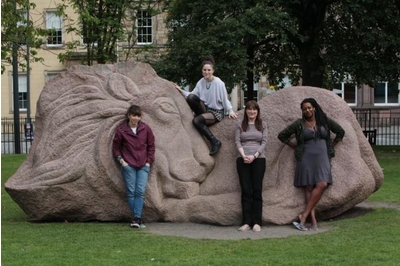 Until this August in Edinburgh, the rape joke was on the lips of young – and sometimes old – male comedians. Now, though, a band of feminist comics has put it well and truly in its grave.

In recent years, if a stand-up at the Edinburgh Fringe wanted to say something offensive, he would just use a gag about rape, or even just mention the word “rape”. Where mainstream comics like Jimmy Carr have gone, lower-rank stand-ups have followed. The rape joke has been everywhere: online, echoed by kids in the street, a much-uttered element of what has been termed “rape culture”.

But all that is changing. A backlash has begun at this year’s Fringe. Misogynist jokes about domestic violence or forms of sexual assault are still out there, of course. You can still go and see a comedian like Mick Ferry and hear a sexually violent and offensive “gag” about the Queen. But the hot new trend is feminist comedy. The cool joke now is the anti-misogynist gag. Feminist stand-ups are more likely to make a riff about executing a sexist, or cutting out free health care for misogynists. The rape joke, in the face of fierce condemnation, is in retreat. Who can do it, how, and whether it can ever be funny are being confronted forcefully.

It’s a debate that is raging in the US as well, where comedian Daniel Tosh was heckled by a female member of the audience about how rape jokes were not funny. He replied in gratuitously offensive terms, ‘Wouldn’t it be funny if that girl got raped by like, five guys right now? Like right now? What if a bunch of guys just raped her?”

But the feminist comedy so prevalent at this year’s fringe is not just a reaction to the rampant misogyny that has been rife on the comedy circuit. The comedians who are creating it are connected to the wider new wave of feminism. They are protesting against what has been happening in the world in recent years: the Delhi bus rape, the shooting in Pakistan of schoolgirl Malala Yousafzai, the ubiquity of extreme pornography, twitter trolls, the sexism and misogyny that seem acceptable to many today, and the anti-feminist agenda.

One stand-up, Nadia Kamil, describes how she was driven to writing feminist material when she got to a point last year where she “felt so dreadful because of the amount of misogynistic stuff that was happening on a global scale”. The feelings culminated around the time US Republican politician Todd Aiken said women who were victims of “legitimate rape” rarely get pregnant.

“I felt really horrible – as a woman, I thought the world was forsaking me. And I had a bit of a breakdown in a shop, started crying. It was the cumulation of things. I felt so low about it that I had to do something about it,” says Kamil.

At one venue, The Stand, there are three stand-up shows dedicated to feminism. There, you can watch Bridget Christie, the comedian who effectively trail-blazed this new trend when she created a four-part radio show dedicated to it, Bridget Christie Minds The Gap. Her show is at 11.10am. In one of her gags she says she had been hoping to take a year off, so she decided to do a show about feminism, at eleven in the morning, thinking no-one would come. Not so, it seems, as she is playing to packed and diverse audiences: men and women of all ages. And she is getting big, hysterical laughs. As the audience leaves, they encounter Nadia Kamil handing out flyers for her show, saying, “Feminist comedy, feminist comedy…”

“No-one is more surprised” than Christie at the success of her feminist show. What has also surprised her is that even when she performs on mixed bills, and is the only woman following a series of men – some of them with misogynistic material – she is very popular. “I always think, this is not going to be good for me. But I’ve done gigs where I’ve been last and there have been male comics on before me and [backstage] he’s said, ‘Oh God, no. Are you on? Wow. What am I going to do?’ I said to one stand-up, ‘Don’t worry about me. If you’ve got reservations about your material, that’s your problem. I stand by every single thing that I say.'”

The blatant and hate-filled misogynistic material that is still out there is to be found, most commonly, in the late night line-ups. At Late ‘n’ Live on Wednesday night Mick Ferry played to a distracted, rumbling crowd, delivering gags about sex with underage girls and domestic violence. Even he, however, wasn’t peddling rape jokes. He had, rather, a gag about rape gags. “The problem with rape jokes: you don’t want to hear them, but you’ve got no choice.” Times do seem to be changing … a little.

The crowd, though, adored it when Ferry stayed on the well-trod ­misogynist path. One man at the back stood up and said that he loved him. This kind of reaction has caused many to wonder what level of anti-female feeling there is bubbling underneath the surface of society. Social psychologist Sarah Becker says one theory used to explain the success of such offensive comedy is “suppression-justification”. She explains: “We’re aware we shouldn’t express these feelings about particular other groups and we repress them. Then in a comedy situation what has been repressed is allowed out. Comedy provides the justification. We can now justify this because it’s not to be taken serious. And the counter is if you don’t, then you’ve got no sense of humour. ‘It’s only a joke, dear.'”

In other words, if rape jokes and misogyny have been so successful on the comedy circuit, it’s because those misogynistic feelings are really there, and have never gone away, however politically correct society may have become. Nevertheless, Becker believes recently there has been “a growing awareness that the rape joke isn’t right. In the broader context of what we have seen in the news over the past years, and the current climate, people have become uncomfortable.”

That said, almost every comedian agrees the rape joke should not be banned, and that it is still possible to do a “good” rape joke. No-one is saying that it’s not possible to do rape jokes. “It’s just that they have to be good,” says Bridget Christie, “and not lazy”. Mary Bourke, whose show Muffragette is part feminist polemic, says her favourite three jokes are all rape jokes told by women.

Dana Alexander tells a joke about how she is too tall to be raped. Almost everyone’s favourite rape joke is Sarah Silverman’s gag about what safe material the rape joke is for a comedian.

The political comedian Mark Thomas, who has feminist content in his show, has noted a change over the last year. “A year or two ago, rape jokes were all over the place, but attitudes change. It’s more unacceptable.

“But that’s not because comedians are worried about morality or upsetting people. They’re just concerned about whether the joke works.

“I think comics work on finding short cuts and finding images and words and ideas that people find agreement on. So actually if those ideas become unfashionable or people dispute them, then comics start to shy away.”

Thomas is not the only male performer to tackle feminist material. Scottish novelist and performer Alan Bissett has a one-man show revolving around the theories of the late feminist Andrea Dworkin, titled Ban This Filth!. Like many of the female comics, he is concerned about the rise of internet pornography and the impact it is having on all of us, both men and women. “I was starting to become concerned about how much I was watching, how much all the men I knew were watching. What was pornography doing to me, what was it doing to other men, what was it doing to society?” he asks.

There is a strand of activism to much of this new feminist comedy. Bridget Christie, for instance, tells a gag about how in recent months she has been going into shops and, if she sees pornography magazines on the bottom shelf, picks them up and puts them in the bin. Part of the joke is the way she repeats that she’s not encouraging people to do something like this. The more she repeats it, the more it’s clear this is exactly what she wants. This is an incitement to action.

The activist element is there, too, in the shows of Nadia Kamil and Mary Bourke. Kamil, for instance, is selling T-shirts after her show, saying, “Honk if you’re a feminist.” She designed them herself to wear while out running because she got fed up with car horns being hooted at her. She ordered 25, she says, thinking maybe she would sell one a night – they went like hot cakes.

In her show, Mary Bourke describes how she has been waging a war against misogynistic trolls, by setting up a troll of the month club and sending out comic images of feminist icons, like Joan of Arc, with sandwiches to any troll who suggests a woman should “get back in the kitchen and make me a sandwich”.

These comedians are clearly connected to a wider resurgence in feminist activism, but they also work in an environment that is tough for women. Both inside the comedy circuit and in the world outside, however, change is afoot. As Bridget Christie puts it: “There’s something in the air at the moment – a general feeling that people have had enough.”

Written by Vicky Allan in Herald Scotland on 11th August 2013.
Filed Under: An Ungrateful Woman, Review

Previous A Bic for Her ★★★★★
Next Edinburgh fringe comedy round-up