Written by Brian Logan in The Guardian on August 6th, 2014 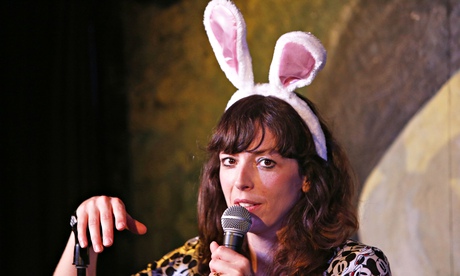 A gimlet eye for discrimination... Bridget Christie in Edinburgh. Photograph: Murdo MacLeod for the Guardian

When she made a comedy show about sexism last year, Bridget Christie tells us, she expected it to fail – at which point (ho ho!) she could quit standup and live off her husband’s earnings. That’s not quite how things panned out. A Bic for Her became one of the standup hits of the decade and Christie became a leading face of feminism. Her new show consolidates that success, establishing – as if anyone doubted it – that her award-winning 2013 act was no one-off. Christie’s got plenty more to say about gender equality, and finds the denial of it as infuriating – and ridiculous – as ever.

The show starts by addressing the idea that there’s not much sexism around – or that, as Christie quotes Telegraph journalist James Delingpole as saying, British sexism is better than Saudi sexism. That claim provides fuel for a fantastically sarcastic sequence, in which a teenage girl being followed home at night flutters a union flag to celebrate the fractionally less violent nature of her looming sexual assault.

The central sections concern women in advertising. The second half, meanwhile, is constructed around her story of auditioning for a bizarre yoghurt advert, and her overthinking of its scenario becomes a running gag she returns to compulsively. One detour finds her analysing how women are implicitly blamed for rape, for reasons that would be ludicrous, she demonstrates, if applied to racist attacks.

Christie’s at her best in these spots, where you don’t see the joins between the feminist argument and the comedy – the latter, indeed, articulates the former. Elsewhere, particularly with her material on female genital mutilation, against which she is a prominent campaigner, she sometimes scurries through calls to arms before justifying them with a punchline.

Nothing wrong with that – comedy shows are allowed to be more than just funny. But Christie’s work generates its biggest buzz when the clownish, self-satirising comic and the passionate advocate for feminism work in such harmony that you can’t separate them. Fortunately, that’s usually the case. What makes her work exciting is that her anger at sexual inequality and her amusement at the absurdities around it seem equally authentic.

In some of the funnier asides, Christie caricatures herself as a militant women’s libber whose gimlet eye for discrimination makes life a misery for “her fictional on-stage husband”. But the show makes no bones that she’s in feminism for the long haul. On the basis of this terrific hour – and of the recent success she announces here for her own anti-FGM campaign – that’s good news for feminism, and great news for comedy.

Written by Brian Logan in The Guardian on 6th August 2014.
Filed Under: An Ungrateful Woman, Review

Previous An Ungrateful Woman ★★★★★
Next Bridget Christie – The Stand ★★★★