‘For now, there’s still plenty to be “banging on” about’ 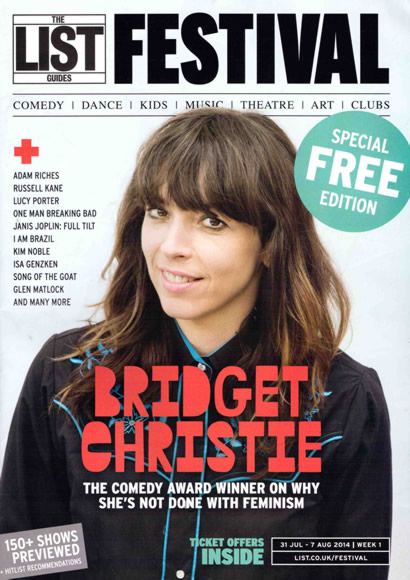 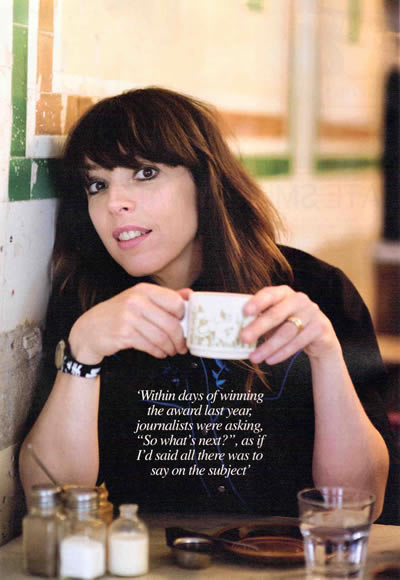 Bridget Christie is back at the Fringe after winning the Foster’s Edinburgh Comedy Award last year for her feminist show A Bic For Her. She tells us why she’ll never be done with feminism – no matter what journalists say

I’m a professional idiot. That’s my job. On both my children’s birth certificates, next to ‘mother’s occupation’ it says ‘Hired Fool’. All I’m required to do is make people laugh. I’m not the United Nations Secretary-General Ban Ki Moon. I don’t work for the Department for International Development or Amnesty International. I didn’t (according to one sarcastic man on Twitter) eradicate female genital mutilation in the whole of Africa by wearing an ‘END FGM’ badge on a TV panel show. If only it were that simple.

I’m a comedian. I stand in front of people and try to make them laugh. That’s my main objective. It may not always look like it, but it is. Sometimes I try to raise awareness for things too, if I think I can get away with it. I write about things that interest me.
For the last few years I’ve been consumed with gender politics, so that’s what I’m talking about at the moment. I didn’t reinvent myself, I just became tired of dressing up as plagues and insects and lugging props around. At around the same time, I had my feminist epiphany when a man farted in the women’s studies section of a bookshop. Was this man’s fart indicative of how modern feminism is perceived today? That it’s just something to be farted at? I wondered if I could talk about feminism, a hugely divisive and potentially alienating subject, by merging these two aspects, the absurd and the weighty, together. By decontextualising the feminist element and placing it next to a fart, you take the curse off it.

Unless of course you don’t find farts funny and hate feminism. In which case, I’m your worst nightmare. Comedy doesn’t need to be about anything of course. In fact, it’s often better if it isn’t, especially on a Friday or a Saturday night, but I thought I’d give it a go anyway. I had nothing to lose. Personally, from a comedic point of view, a man farting at some of the most important works of feminist literature of the past 100 years had legs. That’s how I’ve tried to approach subjects since. Sometimes, you can’t make an idea funny and you just have to let it go.
In my new show, An Ungrateful Woman, I struggled for ages, trying to make a difficult issue work and decided to drop it. Then, a week or so later, someone criticised me over that exact issue and handed me the keys to a routine. Boom! Nice one, dickhead.

When I originally started talking about feminism, about four years ago, I knew it wouldn’t be popular. And it wasn’t. I didn’t have the confidence to talk about it in my own voice, so I did it from the perspective of an ant. I just swapped the word ‘woman’ with ‘ant’, and talked about how difficult it was being an ant comedian. Even though I was obviously shouting about gender equality, people were more willing to accept it because it was an ant. An angry ant shouting about feminism is much less alienating than a woman doing it.
How can you hate an ant? Even still, it hardly ever worked. After a while I just dropped the ant part altogether, and tried to make it work in my own voice. It only came together last year, really.

Comedians don’t change what they do in order to fit in with current trends. We do what we do and hope for the best. Sometimes we’re in and sometimes we’re out. One year absurdism is popular, then observational, then political, and so on. According to one publication, 2013 was ‘the year that the Fringe found feminism’. There were 700 comedy shows on the Fringe last year, about seven of which covered feminism. Does that constitute a trend? It’ll be interesting to see what happens this year.

Within days of winning the Foster’s award last year, journalists were already asking ‘so what’s next?’, as if I’d said all there was to say on the subject. Or that I’d fixed everything. Yes, all the misogynists came, loved it and have stopped with all the oppressing now. Didn’t I do well? No, I didn’t. If anything, I’ve made things worse. I wondered whether male comics were asked the same thing. ‘So, Robin Ince, you’ve been angry for quite a few years now, about various things, like God and badly written books, don’t you think it’s time you moved on to something else now? What about doing some mime, Robin? Or learning the ukulele and singing some songs about sweets, ghosts or mud?’ And Andy Zaltzman. Andy Zaltzman must have done politics by now?! Surely it’s time he moved onto the ecosystem or DIY or cats?

There’s one final thing. When a female comic talks passionately about issues, she is ‘whingeing’ or ‘moaning’, but a male comic doing the same thing is principled, committed and passionate. Mark Thomas, for example, didn’t ‘bleat on’ about the arms trade, did he? He spoke powerfully, bravely and emotionally about an issue that was important to him. I look forward to a time when a woman’s voice, publicly expressing an opinion, isn’t compared to that of a sheep or a goat. I don’t know what I’ll be doing in five or ten years’ time, I’ll probably be dead, but for now, there’s still plenty to be ‘banging on’ about. To quote Helen Lewis, the journalist, ‘the comments on any article about feminism justify feminism’.

The List on 22nd July 2014.
Filed Under: An Ungrateful Woman, Feature

Previous Edinburgh Comedy Awards 2014: Past winners reveal what the top comedy prize means to them
Next A-Z of Edinburgh Fringe 2014 comedy highlights