Written by Sarah Barnes in Uplift Magazine on June 8th, 2010 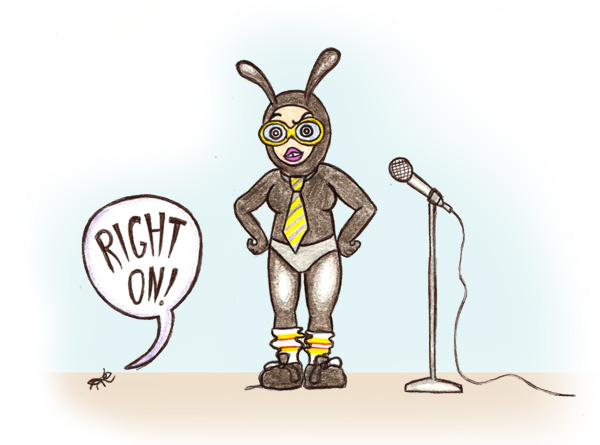 Women. They’re a funny old bunch. I know this, you know this… but it seems there are still those out there who refuse to believe that the ‘fairer sex’ possess fully functioning funny bones. Hurrah, then, for Funny Women – a rather fantastic organisation that’s been supporting, recognising and rewarding female comedians for 8 years.

As we gear up to this year’s Funny Women Awards, the finalists are busy proving of their hilarious existences at various Funny Women Showcases, the next of which is this Sunday (the 13th) at Leicester Square Theatre. Get down there to see the brilliant Bridget Christie (Funny Women Awards finalist 2004 and Funny Women Fringe Award Winner 2007), who will most likely be dressed as a giant ant. No, I’m not joking…

I first saw Christie’s Ant act at Robin Ince’s School For Gifted Children gig, where her A. Ant character complained angrily about always being the token ant at comedy gigs and how, just because she’s an ant, everyone expected to hear all the same old ant-related jokes. Why can’t she be appreciated as simply ‘funny’, rather than ‘a funny ant’? Hmm, sounds familiar…

Find out more about the Funny Women showcase and, more importantly, buy your tickets here!

Written by Sarah Barnes in Uplift Magazine on 8th June 2010.
Filed Under: A Ant, Review