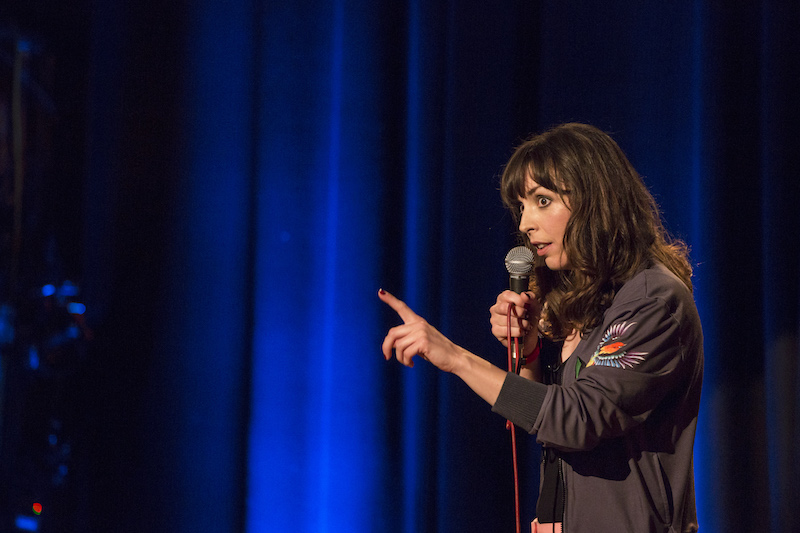 Bridget Christie’s last stand-up show, in August 2016, was a furious, white-hot reaction to the referendum. She had written a different show entirely – about death – but then Brexit happened and she ripped that up and started again. Two years later, she is still seething about the state of the world, but she’s also anxious (thanks to rolling news), paranoid (that Vladimir Putin is watching her through her television), confused (mainly by Ed Sheeran) and sad. “Even bath bombs don’t cheer me up anymore,” she notes.

This isn’t simply two hours of liberal-metropolitan-elite hand-wringing, though. No one checks her privilege like Christie – “a white, heterosexual, able-bodied, rich woman”. She may have a Farrow & Ball loyalty card, she may spend her summers sipping Aperol spritzes among peacocks at festivals, but she is struggling. It’s hard to have fun when you’re constantly fuming. And fume she does. In an early highlight, she notes that she can’t even watch old sitcoms anymore because they simply remind her of the various ills of the world, while her cats offer too many parallels with Theresa May’s negotiating technique to be of any comfort.

It’s notable that this show is far more rooted in the domestic than Christie’s previous shows. She draws her home life vividly, and with a keen eye for the absurd, finding ever more inventive ways to meld personal with political. An extended story about her daughter brushing her teeth or a children’s birthday party gradually winds its way back to the geopolitical firestorm. Watching Ed Sheeran on TV blooms beautifully into a routine about #MeToo and Donald Trump. In the second half, she gets to the meat of her show – the war on truth. She is tired of lies, including her own, and so begins a spurious section is which she claims that she only became a feminist comedian to “get famous”. She’s been pretending for six years, she says, ever since she wrote her award-winning show A Bic For Her, and the subsequent book, radio show and Netflix special. “It’s an act! I don’t give a shit! I just wanted to be famous!” And so she gives an epic, breathless account of a meeting with a chauvinist TV executive, “with French dressing all down his chin”, in which she adopts the pose (literally – she’s all hips and pouts) of a woman-hating bimbo in an attempt to get her own TV show.

Elsewhere, she has acid words for her relationships with her husband and children. Marriage is boiled down to an exquisitely banal conversation about the fridge. And she adopts a delicious “bad Mum” persona as she wonders, outraged, why she has to live with her children when she has absolutely “nothing in common” with them and their “conversation” bores her to tears. It might not be entirely honest, but in opening up a little, Christie has added a pleasing new dimension to her comedy. Not everything in the world is getting worse, after all.

Written by Alice Jones in The I on 7th November 2018.
Filed Under: What Now?, Review