Bridget Christie: Gleeful in trashing the label that defined her ★★★★ 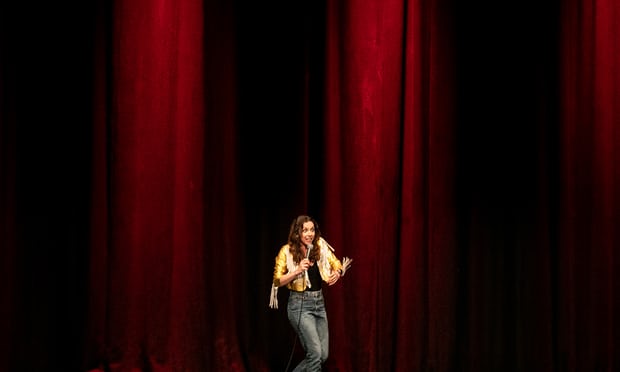 Lying, says Bridget Christie, has been tainted by association with Trump, Putin and the Brexit campaign. So she’s giving it up: now it’s the truth and nothing but from Christie. Hence: “I’ve been pretending to be a feminist for six years!” Her Edinburgh Comedy award-winning show, her book, radio series and Netflix special: all just a sham, she tells us now, like a dam bursting. “It’s an act! I don’t give a shit! I just wanted to be famous!”

What Now? is Christie’s first new show since Because You Demanded It, her fantastic, hastily assembled response to the Brexit vote in 2016. That set in turn followed several shows which combined clownish comedy and campaigning feminist zeal to thrilling effect. All of which makes What Now? unusual for Christie in having no specific agenda beyond making us laugh. Happy to report that it succeeds lavishly in that aim, as Christie goons around, sending up herself, her parenting, David Davis and the impoverished state of UK politics.

That opening section, purporting to blow the gaff on her fraudulent feminism, is a real cracker – partly because the conceit is so ridiculous, partly because Christie’s relief feels authentically gleeful at trashing the label that came to define her. But mainly because she works it into such a preposterous routine in which she feigns some sort of ecstasy at meeting with a boorish TV exec who (at last!) is on her chauvinist wavelength.

It is a section that showcases the best of Christie: the self-mockery is ruthless, her syntax topples under the weight of her excitability and the sarcasm of the whole conceit is playful and pugnacious in equal measure. What feels new – or more exaggerated than before – is how Christie uses her body to escalate the comedy. That opening segment is underscored by a variety of silly walks that would make John Cleese blush as Christie burlesques this or that attitude she is affecting to strike. Later, punctuating the punchline to a gag proving Peter Stringfellow is to blame for Brexit, she arranges herself into a cartoon of gloaty triumphalism.

That is all we hear of Brexit tonight, although there is a droll section dedicated to the gravitational power of Theresa May’s mouth, and some well-chosen examples of politicians of yesteryear whose inspirational qualities we now so keenly lack. More often, Christie steers clear of big-P politics, in favour of gags mocking her supposed privilege as a member of the “liberal metropolitan elite”. You could peg this as “first world problems” material, so well-loved by modern middle-class comics. But the quality – and Christie’s high-strung personality – elevates it, as with a daft routine about a new dishwasher making her think she is under attack from jihadis.

The final third covers Christie’s family life, as a mother of kids with whom she has nothing in common (“Can’t they go somewhere else for a bit?”), and as one half of a couple whose conversations are the acme of domestic dreariness. Christie recites one here, her voice drably neutral, her saucer eyes begging the audience for help. A final section recovers the intensity of the show’s opening, as a lecture to her daughter about the evils of Valentine’s Day spirals into a cri de coeur about our lives being governed by lies, now more than ever. Her daughter is desperate to get away; her delighted audience, quite the opposite.

Written by Brian Logan in The Guardian on 20th May 2018.
Filed Under: What Now?, Review