Bridget Christie was hoping to repeat the success of last year’s A Ant (as seen on Harry Hill’s Little Internet Show), by appearing in her 2011 show as new character Japanese Knotweed.

Bridget Christie was hoping to repeat the success of last year’s A Ant (as seen on Harry Hill’s Little Internet Show), by appearing in her 2011 show as new character Japanese Knotweed. 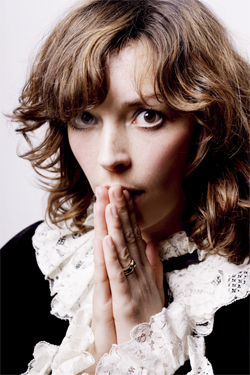 “I previewed it last week,” she says. “The first ten minutes of the show were taken up by me having to cut myself out the costume!”

So Japanese Knotweed has been put to bed, replaced by an equally – and typically for Bridget – surreal opener.

“I now come out dressed as a bishop. Doing a dance to the Dr Who theme tune. And I hand out extra strong mints as communion.”

“Though the last time I did it I was suffering from a sore back and was staggering about – I looked like I was doing a mickey take of the Pope.”

Bridget’s show, Housewife Surrealist, is all about religion – although this is a departure from what she originally had planned.

“It’s changed over the past few weeks,” she says. “Comedians never seem to know what voice they should use, so I was on the phone to my brother and asked his opinion. He described me as the housewife surrealist, so I used that as the name for the show.”

“Then I tried a couple of religious jokes,” continues Bridget, who is Catholic herself. “Then a couple more; and a couple more. They went down well. Most comedians dealing with religion choose to focus on atheism. I’ve had people describe my jokes as a breath of fresh air.”

Though Bridget’s treatment is still on the irreverent side.

“In the middle of the show I get someone up on stage for a confession. By that stage, I’m sick of my own voice; and it will be different every night, so it helps keep the show fresh for me.”

“And I recreate the Ascension at the end. With a little Jesus on a fishing rod. And oh yes, he’s carrying a bookcase filled with all his books and CDs. He was a carpenter after all.”

Whilst Bridget probably won’t be asked to play at the Vatican any time soon, she is a Fringe regular: Housewife Surrealist is her 7th consecutive Edinburgh show.

“I love the camaraderie of the Fringe,” she says. “You never feel alone. And you can never second guess Edinburgh – you don’t know how you’re going to be received.”
“It’s so exciting.”