Written by Stephanie Merritt in The Guardian on August 10th, 2014 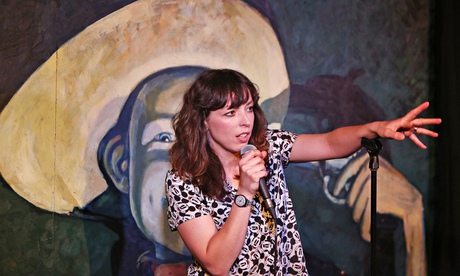 'Smart and funny': Bridget Christie at the Stand. Photograph: Murdo MacLeod for the Guardian

“To be honest, I was hoping my feminist comedy show wouldn’t be very successful so I could give up work and be supported by my husband,” Bridget Christie deadpans in the follow-up to her Edinburgh comedy award-winning show of last year. “Unfortunately it did quite well so I’ve had to carry on.” An Ungrateful Woman (The Stand) builds on that success, despite an interviewer asking her recently: “So you’ve done feminism – what next?” “It’s not a passing fad,” she splutters. “I’m literally never off. I’m like Rob Brydon in The Trip.”

Her delivery – the goggle-eyed, exaggerated indignation at the absurdity of some injustices against women – is a clever way of wrapping her real anger at more serious issues in a form that makes it palatable to comedy audiences. She has set herself a challenge; it’s one thing to laugh at Steve Davis saying women lack the mental focus for snooker (‘We lack the mental focus to push a ball into a hole with a stick? Still, we do have the mental focus to push a person out of a hole, eh?”), but quite another to find any laughs in FGM, of which she has become an active opponent.

Instead, the jokes come from the situations in which she finds herself while campaigning, particularly the fear that a tentative progress might spell the end of her comedy career as she’d be left with nothing to complain about, “and it’s taken me 10 years to come up with this persona”. Christie walks a brave line here, but once again she has managed to create a smart and very funny show that goes beyond comedy without compromising on the laughs – a truly impressive achievement.

Written by Stephanie Merritt in The Guardian on 10th August 2014.
Filed Under: An Ungrateful Woman, Review