‘I thought I’d hate it’: Bridget Christie on loving the Last Night of the Proms

Written by Bridget Christie in The Guardian on September 15th, 2019

Laura Mvula was captivating, and I cried when opera star Jamie Barton took to the stage with a rainbow flag. Shame the conductor spent the entire night with his back to us 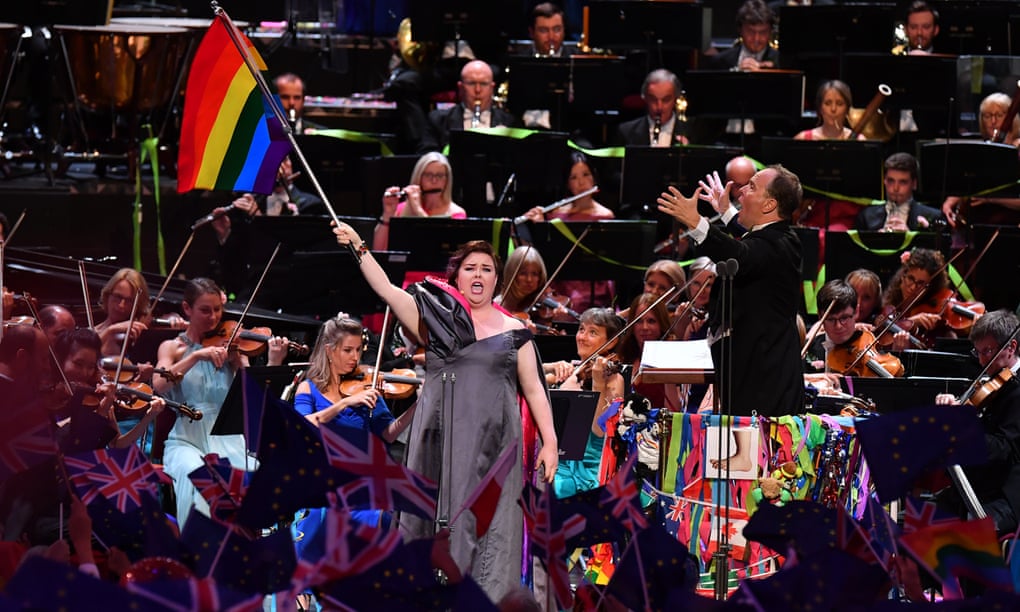 ‘That old lady with the white hair just said ‘Oh fuck off’ to that man playing the guitar” my seven-year-old whispered to me as we arrived at the Royal Albert Hall for the Last Night of the Proms. “Optimism isn’t enough to get us a deal” he sang. “Yes it is,” a union jack-waving man replied. At first, I thought it was all part of the show. A neat conceit I’d often seen used by devised theatre groups at the Edinburgh festival, where they’d start the show outside, interacting with the audience, planting ideas, making us think.

“How clever of the Proms director to think of doing this,” I said to my son. “In a time of such political uncertainty, and social division, they’ve really thought outside the box this year. This is about leaving our disagreements outside, I think, and coming together through a shared love of music. It’s about celebrating Britishness, and British music, and what it means to be British, and leaving politics out of it.”

“It’s not as simple as that though is it?” my son replied, “Because when the Proms started over 120 years ago, what being British meant wasn’t what being British means today. Britain’s in the midst of an existential crisis. What is British? What is music? Plus the conductor, Sakari Oramo, is Finnish and the guest vocalist is American. Can I have some crisps?”

“Stop reading the programme,” I told him, “and look at the attention to detail on the actor’s guitar”, I said, “It must have taken him ages to stick all those ‘Bollocks to Brexit’ stickers on it.” But it wasn’t part of the show. The guitar-playing man was a real man from the anti-Brexit, pro-music campaign group Thank EU for the Music and the angry old lady and the union jack-waving man were just punters wanting to queue in peace.

“Oooh!” I thought, “This is going to be a fruity night! My angle can be how even proper music can’t unite us. I’ve got an EU flag poking out of my bag. I hope an old Brexit lady doesn’t flush my head down the toilet in the interval. I’ve just washed my hair.”

But unfortunately nothing else happened. Once inside the building, the Proms audience were the gentlest, jolliest, kindest, best-behaved crowd I’ve ever been in. Not a single phone went off in three hours, everyone was nice to one another, no one farted in my vicinity, and apart from the one man in the whole room not holding hands during Auld Lang Syne because he needed both of his hands to hold up his flag, manners were impeccable. The worst behaved person in the whole room was the conductor, who spent the entire night with his back to the audience and going off stage between songs for God knows what.

I didn’t know anything about Last Night of the Proms before yesterday. My Irish working-class parents never watched it, I’m not a classical music fan and being surrounded by 5,500 white people waving union flags and bellowing “Rule Britannia!” is not my idea of fun. I thought I’d hate it, but I had one of the best nights of my life. I spent most of the first half either crying or stamping my feet. “Why are we stamping our feet to this one?” I said to the man next to me, “Because it’s upbeat!” he shouted merrily, “And also because why the hell not?!” Laura Mvula’s Sing to the Moon was so captivating you could hear a pin drop. I had to stifle my sobs for some unknown thing I was grieving for (a united Britain?) as the 5,500-strong room fell utterly and completely silent.

I cried the entire time opera star Jamie Barton was on stage. I have never seen a performer unite a crowd so immediately and powerfully. I fell instantly and completely in love with her with every fibre of my being.

Unable to stand for Rule Britannia, I was brought to my feet by the rainbow flag she waved during the final verse. What an extraordinary act. In a second I went from feeling ashamed to proud. But the standout moment for me was the sight of an enormous, straight banana balloon, wearing an EU cap, gently swaying from side to side during Henry Wood’s Fantasia on British Sea Songs, next to a solitary “For Britain” flag, also gently swaying. I said to my son, “How clever of the director to think of doing that. I think it’s about tolerance and the things that unite us …”


Filed Under: Writing The Guardian

Previous Cheap razors are great but what if you’re a hairy woman who doesn’t shop in Tesco?
Next I’m obsessed with a pair of pants I saw in a bush on my lockdown run