Written by Bridget Christie in iNews.co.uk on May 1st, 2020

Anything is possible in the new normal. Maybe someone was IN the bush, going to the toilet, and I didn’t see them? 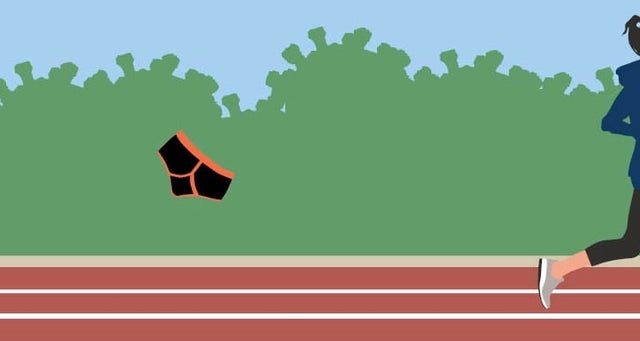 A few days ago I ran past a pair of pants in a bush. I go for a run or a walk in the park every day now. Apparently exercising is good for your mental health, especially if it means you can get away from your family for a bit.In normal times, I’d have just run past the pants and not given them much thought, my mind racing with all the other things I’d have to do that day. Things that don’t seem very important now at all. Things I’m not sure I’ll be able to go back to doing when (?) this is all over. Things like getting dressed, putting the cutlery away in separate sections, or clipping my toenails.

Anyway, I can’t speculate about which unimportant things I will or won’t do when (?) we’re out of this, because that would involve planning for the future, and we can’t do that because we’re in the midst of a global pandemic of catastrophic proportions and no one knows when it will end or how we’ll live and work. I can only think about today, and today I’m mostly thinking about some pants I saw in a bush.

Like I said, in normal times I’d just ignore these pants. I live in London. There are pants in bushes everywhere here. And other things in other places, too. At least there used to be, in the before times. I saw a Barbara Cartland novel and a potty on someone’s garden wall once. “Not the best reading material for a toddler”, I thought to myself. People don’t leave stuff out for other people now. No one will take it. It might have “it” on it.

I love that about London. The anonymity. If I was sick of my hat, I could just leave it on a bollard, and no one would bat an eyelid. I couldn’t stand living in a small village where everyone knew everyone’s pants. The kind of place where someone says: “Terry said John’s thrown his pants in a bush, Linda. Terry was walking his dog and saw them. He knew they were John’s because he saw John hang them out on the line on Monday, and anyway no one else in the village has black pants. I’d better tell Jean. She’ll be wondering why John’s a pair short,” and it isn’t thought of as anything unusual.

But these are not normal times, these are extraordinary times. Things that don’t normally matter do; things that normally do, don’t. And just like everyone else whose work isn’t essential (or in my case not even necessary), my physical world has shrunk to my house and the park, so the story of how these pants got into a bush on the side of the running track matters.

At first, I thought the pants were a vest top, abandoned by a sweaty jogger who just couldn’t bear it any more. I’ll often see young, bare-chested men, or “show-offs” as my daughter calls them, sprinting round the track in just their shorts and trainers, like peacocks on steroids. Around they go, flaunting their taut torsos and robust immune systems, running straight down the middle of the track, like Moses parting the waves, as the rest of us mortals leap out of the way. Sticking to the left, keeping 2m apart, not spitting and being considerate to others (like it says on all the massive posters around the park) is not for them.

They stride past my invisible, middle-aged body, forcing me into bushes full of pants and stinging nettles – or worse, the paths of others. Paths that have already been earmarked by others. Paths that were clear and safe and virus-free until I was forced into them by Spitting Topless Bro and now I’M THE BAD GUY as a Pythonesque Covid-19 social distancing sketch plays out in front of me. A slapstick comedy chain-reaction of horror and fear as people duck and dive and bob and weave their way out of harm’s way. Once, the path was so busy, I ended up going back the way I came just to avoid everyone.

But it wasn’t a top. It was a pair of clean, black Y-fronts. If you had a one-night stand and saw these pants on your bedroom floor the morning after, they wouldn’t be the reason you didn’t see this person again. This person hadn’t given up. The pandemic hadn’t ground them down. This is a good story. But today the pants were gone and my pants adventure is over. We’ll never know why they were left there, but we do know this. The owner must have returned for them, because it is now, and no one would take a stranger’s pants from a bush now. They might have “it” on them.

This week I have been…

Watching…The night sky. The actual night sky, I mean, not a new reality TV show called The Night Sky, about a middle-aged woman who knows nothing about astronomy, drinks beer and looks at the sky for half an hour saying things like: “Who owns space, anyway?” and: “Hang on, so what I’m looking at NOW is in the PAST?” Although I would watch that. Any interested TV commissioners please contact my agent.  I usually go out – I’m incredibly lucky to have a garden – around 9pm after Columbo (we’ve watched an episode a night since lockdown began).

It’s nice to give the eyes a break – we’re looking at screens all day, what with all the online home-schooling and watching Columbo. I live in London. The sky is normally full of planes and pollution, but now it looks like countryside sky and you can see the stars. And it’s so quiet.  One night I saw a continuous  line of satellites. I didn’t know  what it was at first, and for a moment it felt magical and mysterious, but then I found out they were Elon Musk’s Starlink satellites. It was a shame. I’d been watching the stars, contemplating the meaning of life and now I was thinking about a silly billionaire.

Washing…Things I’d never normally wash. Being in the house all day has made me realise how dirty everything is, so I’ve seen things I didn’t even know could be washed. I started off with easy things like my family and the cats, but then I noticed how filthy my sofa was, did a bit of digging, and discovered the entire cover could come off! Literally life-changing.

Growing…Beetroot, radishes, carrots, parsley, basil and peppers. Before lockdown, my daughter  started collecting these Little Garden Seedling kits from M&S and so we’ve been nurturing those.  One day, when we were re-potting them, the radishes were accidentally knocked off the kitchen table, swept up and thrown in the bin – but I rescued them and now they’re doing the best.

Previous ‘I thought I’d hate it’: Bridget Christie on loving the Last Night of the Proms
Next Ritual Britain made me proud to be British