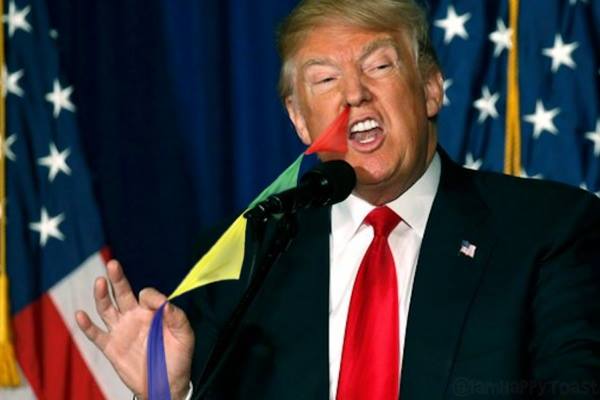 Sorry it’s been so long. I’ve not really felt like talking lately.
I’ve been a bit busy – rocking back and forth in the airing cupboard muttering, sucking on a comfort blanket, and trying not to think about Trump’s sentence structure when he talked about Afghanistan during his Times interview, Brexit and the Antartic crack.

CHANGES TO MY APPEARANCE AND PERSONALITY

I’ve grown my fringe out and started wearing earrings. Don’t be alarmed, it’s still me, and I’m NEVER getting my webbed toes separated, I just felt like a change.

I will also be experimenting with my personality and behaving differently, for fun, so look out for that.
You’ll probably think, “That doesn’t seem like Bridget” or “What an odd thing for Bridget to do”, or “Wow! What an arrogant wanker.”(*) That sort of thing.

Don’t worry about it, it’s an experiment. You may not even notice, it will be very subtle.
I’m just going to do life differently for a bit and see if it makes any difference.

DONALD TRUMP PULLING FLAGS OUT OF HIS NOSE

I know this is about 2 months old now but if you missed the whole thing because you were HIDING in a cupboard, I guarantee it will cheer you up for ages.
Just do an image search on “Donald trump nose flags.”

A BOOK FOR HER BY “ROSY EDWARDS”

Listen to this! Just before Christmas, I had the honour of doing a talk at a girls school. It was great fun and the girls all asked amazing questions.
Although, rudely, they were much funnier and more insightful than me, which I thought showed a great lack of judgement and respect on their part and I won’t be going back there again in a hurry I can tell you that. Bloody cheek.

Anyway, after the talk, the quite brilliant deputy head who invited me asked me to sign her book (which was my book, do you see?). It was in doing so that I noticed that the imprint page, which has all the copyright stuff on it, said “Rosy Edwards has asserted her right to be identified as the author of this Work in accordance with the Copyright, Designs and Patents Act 1988.”

Well, as you can imagine, I was very surprised and confused by this! I was there when I wrote the book and I don’t remember someone else who isn’t me being there and writing it for me? I don’t even know anyone called Rosy Edwards. I don’t think I’m even on nodding terms with someone called Rosy Edwards, let alone spend 5 months with them.
I certainly don’t remember watching Rosy Edwards trying to knock the thing out in a log cabin at Forest Holidays during half term while my husband took the kids out all day as I relaxed in the hot tub? I have no memory of that at all.

Anyway, because of this, there are now thousands of books in circulation saying Rosy Edwards wrote my book. But she didn’t. I did.I don’t know who she is. Someone obviously just fucked up. BIG TIME.

I looked Rosy Edwards up to see if our books were similar and that was how someone got us mixed up, but she wrote “Confessions of a Tinderella – A laugh-out-loud true story of one girl’s search for Mr Right – one swipe at a time” so it wasn’t that. I don’t know how it happened. They obviously just change the name on a template and forgot this bit, or something.

Anyway, the great thing is, if I hadn’t gone to the girls school and done that talk, I’d never have known, because I’m obviously not going to be buying copies of my own book. The moral of the story is, never assume your publisher will spot mistakes.

LEICESTER SQUARE THEATRE – BECAUSE YOU DEMANDED IT – JAN 31ST-FEB 11TH

Come on guys. I arrogantly put loads of nights on in a 400 seater and now I’m a bit worried.
The first 8 shows sold out (*) but I still have another 2 weeks or so starting at the end of January.
PLEASE COME. IF YOU ENJOYED IT TELL YOUR FRIENDS. THERE ARE NEW BITS IN IT. HEELLLLLLP MEEEEEEE!!!!

BECAUSE YOU DEMANDED IT – TOUR

I arrogantly booked a tour in bigger rooms than last time and now I’m a bit worried!
Please come!

Please come to the Leicester Square Theatre shows and the tour.
I’m giving up stand up forever after these shows** so don’t miss the opportunity of seeing me perform live these last few times.

** I am genuinely giving up, but only for a few months while I write a few things.
You’ll still be able to see me perform live until I’m about 70 I expect.
But you should still come to LST and the tour, in case I die immediately afterwards.

Can’t even begin to talk about Farage and James Delingpole’s comments about Brendan Cox. Can. Not. Even. Begin. – but here’s Mark Steel’s brilliant column about it.