THE DISMANTLING OF THE NHS

I’ve just found out that Jeremy Hunt is an alien from a planet called Annoybius. The Annoybius people’s main objective is to annoy the shit out of people, especially those who save lives, by using their facial expressions, behaviour, general attitude and physicality. The Annoybians studied Tories and the common house fly in order to achieve maximum levels of annoyance, or “annoybiance”, as they call it. Jeremy Hunt is the current King of the Annoybians and he’s doing really well. Everyone on Annoybius is really pleased with him. The Annoybians also smell like dog muck.

Thank you so much for coming along to A Book for Her’s London run. I really did have a wonderful time and it was lovely meeting so many of you at the book signing after the show. I was only punched and spat on a few times, and only a handful of you asked for your money back, so all in all it was a great experience. As I’m not really on social media it was great to interact with you all.

Just so you know, I was covering for maternity leave and was contracted to write 17 columns. I have one left to do and then I’m finished. Thanks for those of you who sent positive feedback, but I’m looking forward to not having to have an opinion once a week for quite some time now, after only really having opinions about once every 20 years. My brain is literally empty now and it’s going to take quite a while for it to fill up again, if ever. You can read all the columns here.

CHORTLE AWARD FOR BOOK FOR HER THE BOOK – PUBLIC VOTE

Old Chortle, the comedy website, have nominated my book in the book category. I was very late delivering on it, which caused my editor no end of anxiety, which she never showed, so you could say the award is for her really. Also, I developed RSI and haemorrhoids writing the book and on the day it was serialised in The Guardian, a man read an excerpt and then said , “Bridget Christie’s father deserves to have his cock cut off” which doesn’t even make any sense does it? Surely it should be his testicles? If he meant for spawning me? Everyone nominated in my category is great (Limmy, Deb Frances-White, Standard Issue magazine). You can vote for anyone you like (ME ! ME! ME! AND TELL EVERYONE ELSE TO VOTE FOR ME ME ME TOO! ) here. 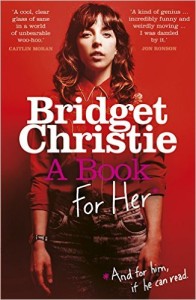 PAPERBACK – A BOOK FOR HER

The paperback is out on 25 February. You can pre-order it here. It’s cheaper than the hardback.

The tour is starting really soon. Please come. I really want you to come. I’ll be signing books after too so we can meet and have a quick chat. Book early as some are dates have sold out already. Here’s the link.

I’ve recorded a couple of TV things as part of my year of doing TV things. Alan Davies As Yet Untitled and Room 101.
I might have possibly said things things I don’t believe or made things up to confuse and annoy people, as social experiments, or to see if something funny comes out of them. Don’t worry about a thing.

The cat has just tried to eat some tiny foam hearts that came in a little plastic bag with my daughter’s magazine that she’s been making into a necklace, choked and got sick right next to me as I’m typing this. So I’m going to get off now and clear it up. I feel like I’ve forgotten to tell you something really important but I can’t remember what it is. If I remember, I’ll send it out as a separate thing.

COME TO THE TOUR!!