Where do millennial dads get the energy for affairs?

Written by Bridget Christie in The Guardian on January 30th, 2016

Some nights I’m so mentally and physically exhausted, I don’t even brush my teeth 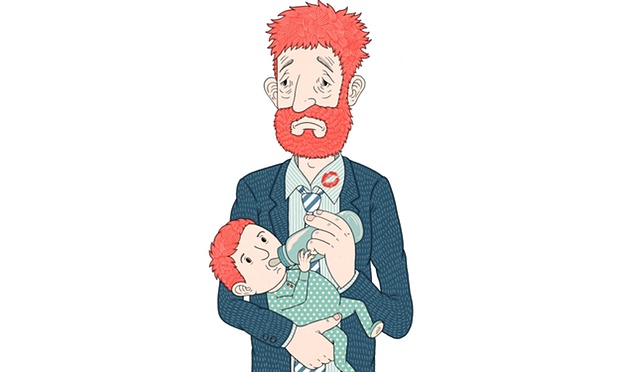 Poor millennial dads. According to a study just published, 42% of fathers born after 1980 feel “burnt out” most or all of the time from the strain of trying to juggle their work and family lives. This compares with 0% of men born between 200,000BC and 1980, who weren’t expected to share childcare and domestic duties at all, and were allowed to sit around in their pants after work, ignoring their children, reading the paper and being handed things. Even family men with stressful jobs who you would think would feel the strain, such as Stalin and Mussolini, never felt burnt out. Maybe if Mrs Stalin had put her foot down and forced him indoors to pull his weight around the house, push the vacuum cleaner round a few times or change the odd festering nappy, he wouldn’t have had the energy to cause the deaths of millions of people. I know I wouldn’t. Some nights I’m so mentally and physically exhausted by work and house admin, I don’t even brush my teeth, let alone start drafting a forced collectivisation policy.

But hang on a second. Relationship experts are now saying that as many as 40% of people in long-term relationships will have an affair. And biological anthropologist Dr Helen Fisher quotes research that shows 56% of men who’ve have had affairs described their marriage as being happy. What I want to know is, where exactly are these cheating men finding the energy and time for all this extramarital bonking? Surely they’re too worn out by all the “women’s work” they’re doing: ironing name tags on to school ties and sports socks, scrubbing the toilet before the cleaner arrives, arranging play dates, choosing presents for their wives’ extended families they’ve never met, shining torches into their children’s bottoms and checking for intestinal worms, combing lice eggs out of their hair, baking cupcakes at three in the morning, crawling around on their hands and knees on the kitchen floor with a dustpan and brush wondering where all the peas and glitter came from, and being passive-aggressive to tiger mums at the school gate? I have done all of these things before 9am on many occasions, and the last thing I want to do afterwards is indulge in some lying, hiding and fornicating. I think I speak for all women on that one.

Of course the real story here is not that a new generation of fathers are starting to feel the work/life strain that women have for years, but that they hadn’t been feeling it until now. And that while it’s great that today’s new dads are keen to divvy up childcare and domestic responsibilities, the infrastructure desperately needs to catch up. We still don’t have affordable childcare, and while most employers support the government’s shared parental leave policy, a recent study showed that only 2% of fathers are taking this right. Compare this with Sweden, where men take an average of three months off to care for a newborn. Here, less than 10% of men take more than the statutory two weeks.

And some of them are apparently still managing to fit in seeing another woman. I know that my own husband would love to have an affair, and I would love him to have one, too, but he simply doesn’t have the time nor the energy. By the time he’s got in from work, run a duster along the tops of the door frames and emptied the dishwasher, he barely has the energy for a quick catch up on hegemonic epistemology in feminist discourse before crashing out.

Also, we live in London which is a nightmare for parking, so whoever he was having sex with would either have to live in the same zone, or keep applying every month for their maximum allowance of visitors’ parking vouchers. Now I like sex as much as the next feminist, but even the possibility of a forbidden liaison isn’t enough to entice me down to Hackney parking services once a month, to take a ticket and wait. Not after having done exactly that for the builders for 10 months. None of whom, incidentally, showed the slightest hint of being sexually attracted to me, not even the old ones. It’s absolutely outrageous. And, if I might add, completely unprofessional. Perhaps we are making progress after all. Either that, or I’m not ageing as well as I thought I was.

Previous The trouble with mobile phones
Next Why does George Osborne make me so angry? Let me count the ways…