The trouble with mobile phones

Written by Bridget Christie in The Guardian on January 23rd, 2016 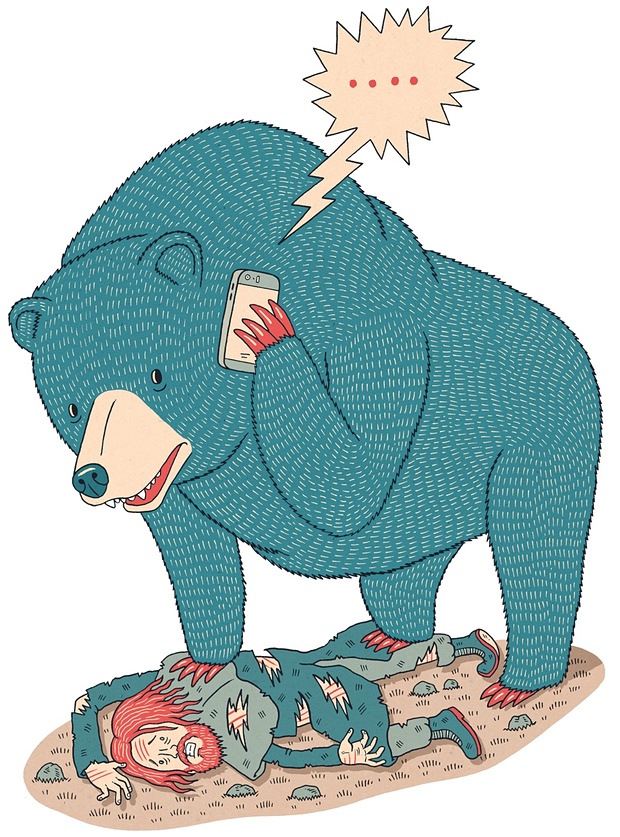 Last Sunday evening I went to my local cinema to see the Oscar frontrunner, The Revenant, starring Leonardo DiCaprio as a cold, hungry, injured, angry man. Halfway through this beautifully shot survival epic, and during arguably the most pivotal, heart-wrenching moment in the entire two and a half hours, some idiot’s phone went off.

Discombobulated by the cinema’s Dolby Digital Atmos surround sound system, which makes it impossible to locate sounds accurately, and by my fellow cinemagoers’ indifference, I assumed it was part of the film’s soundtrack. Surely no one could have missed the lengthy and authoritative TURN YOUR PHONES OFF message at the beginning of the film? I couldn’t work out why Alejandro González Iñárritu, who had spent five years getting the locations right, would choose the opening theme to Quentin Tarantino’s Pulp Fiction to accompany such a delicate scene.

And that was that. The film was ruined. I was no longer in the wilds of 1820s America; I was in Vue Islington, with an undrinkable coffee and a careless idiot. (The phone owner, not my husband, even if he had just spilled all my popcorn on the floor.) Art lost, technology won, and a story about a man’s struggle with himself and with nature became a sequence of events involving the famous actor Leonardo DiCaprio and weather.

In one scene, DiCaprio goes off for a walk and gets mashed up by a grizzly bear protecting her cubs. This is the best female part in the film. There are three others: one is a ghost with no lines who floats around like David Blaine; another is raped against a tree and says six words (“I’m going to cut your balls”); the other is given some bread and eats it.

I had seen The Hateful Eight the previous Sunday night, so this time caught myself thinking, “Ah well, at least none of these mute women keeps getting their teeth and nose smashed in by a man’s elbow, like the mainly mute female lead in that film.” Jennifer Jason Leigh may have got an Oscar nomination out of it, but six of the eight films on this year’s best picture shortlist are men talking and doing, leaving just two movies with female leads – Brooklyn, and Brie Larson trapped in a room. Thank God there is a female actor category, otherwise no woman would get a look-in. Perhaps Oscars president Cheryl Boone Isaacs, who said this week she was “heartbroken” at the lack of diversity in her awards, should seriously consider an All Other Type Of Human Except White Man category.

Sitting in the cinema, I thought of the time a parishioner’s mobile phone went off behind my priest on Good Friday, during his profoundly moving reading of the 7th Station of the Cross: Jesus Falls for the Second Time. It wasn’t Pulp Fiction this time, but the original Nokia ringtone, shattering the most spiritually significant moment of my year. Of course, I should have let it go and forgiven the man his innocent blunder, especially bearing in mind the occasion. But that ringtone reminded me of Dom Joly, and no amount of forgiveness can fix that.

Technology is morally neutral, but our use of it isn’t. It is giving us a sense of entitlement, ruining films for other people, interrupting moments of contemplation, causing road traffic accidents, even affecting our sex lives. (A 2014 survey by Durex revealed that one in six Britons will answer the phone or read a text during sex; 60% said they actually preferred using technology to having sex.)

On New Year’s Eve, we had family to stay and, as we all sat down to play cards, I banned phones from the room. It felt patronising and controlling, but no one had to wait for anyone else to finish sending a text. Everyone was bored and annoyed, yes, but not preoccupied.

Our addiction to technology is changing our experience of the world irreversibly. It means we can’t see a shooting star, a hare in the woods or a child being born without tweeting or Instagramming it, to see how popular it is. And it means me thinking that the world-renowned Japanese composer Ryuichi Sakamoto, who scored The Revenant, along with the world-renowned director Iñárritu, thought it was a good idea to have the opening theme to Pulp Fiction at the most emotional moment of the film. Nothing, not even a naked DiCaprio crawling inside a disbowelled horse to keep warm, could win me back after that.

Previous Parenting advice? From a man who left his daughter in a pub toilet?
Next Where do millennial dads get the energy for affairs?