Written by Bridget Christie in The Guardian on October 24th, 2015

If anyone has a right to be offended, it probably isn’t George Lawlor for being invited along to a sexual-consent workshop 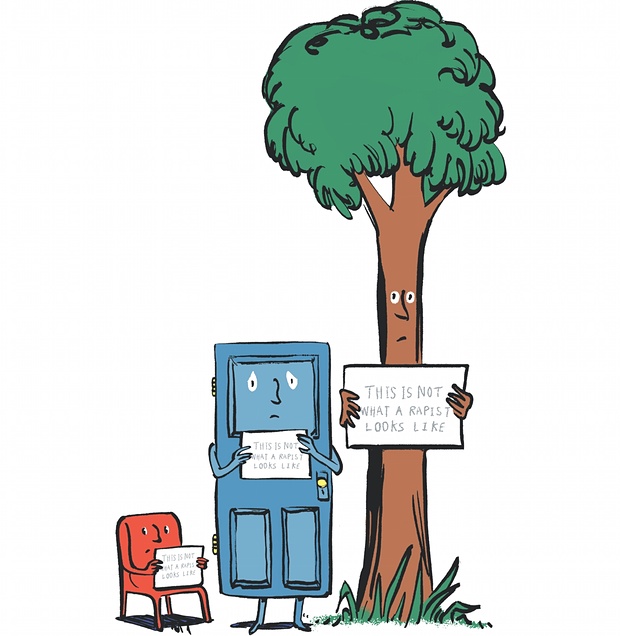 I was once asked to draw a rapist, for a workshop. Back then, I didn’t know what a rapist did or didn’t look like. Now, thankfully, a man has taken a photo of himself holding up a sign saying, “This is not what a rapist looks like”, and put it on the internet, to help us.

That man is Warwick University student and non-rapist George Lawlor (who is not only not a rapist himself, but also has no known connections to rapist groups). Lawlor was so offended after being invited to a sexual-consent workshop that he penned a furious rebuttal to the organisers, published in online student newspaper The Tab. Meanwhile, rapists, who have now been alerted to the workshops, are upset about not being invited. The room in which the workshop was scheduled to take place is also deeply offended, and has written a piece for Rooms Monthly about how insulting it was to have to host a workshop on sexual consent, the implication being that it was the perfect space for such a discussion, when a sexual assault had never even taken place in its four walls. The room added that, while it accepted that a lot of rapes do happen in rooms, it didn’t mean that all rooms hosted rapes, and that some of the workshops should take place outside as well – in parks, for example. Then some parks read that and were offended as well.

In his article, Lawlor accused the Russell Group University consent teachers of patronising and insulting students, and said the invite felt like a “massive, painful, bitchy slap in the face… It implies I have an insufficient understanding of what does and does not constitute consent and that’s incredibly hurtful.” Then he took that photo of himself, which implies he has an insufficient understanding of what a rapist does and does not look like, and that’s incredibly hurtful not only to rape victims but to rapists, too, many of whom look exactly like Lawlor.

If Lawlor had been handpicked by the consent teachers out of a lineup of 100 male students as the one who looked most like a sexual predator, then I could see why he might feel a bit put out. But he hadn’t. He’d been invited on Facebook, along with many other students. And when you consider that one in three UK female students has suffered some form of sexual assault, ranging from unwanted groping to rape; that the government has deemed universities such an unsafe environment that it has ordered an inquiry into violence against women on campus; and that Oxbridge has introduced consent sessions into freshers’ introductory timetables, the picture begins to look quite different. That’s before you factor in that one in five women between the ages of 16-59 has experienced some form of sexual violence; that of an estimated 85,000 rapes in England and Wales every year, only 1,070 end in a conviction; and that 90% of rape victims know their attacker but only 15% report it. If anyone has a right to be offended, it probably isn’t George Lawlor for being invited along to a sexual-consent workshop.

But of course he does have a right to be offended, and the right to offend. We all do. I’m both offended by and offend people all the time, especially on the issue of rape. I was offended by the invention of lockable “anti-rape pants” for women, by a company in New York called AR Wear, putting the onus firmly on the woman to try and not get herself raped. (Perhaps they could invent a pair of anti-rape pants for men as well? Ones that send electroconvulsive shocks to their genitals whenever they feel an imminent rape coming on?) I was offended by the dazzling ignorance of the Department for Work and Pensions when, after it was recently announced that child tax credits would no longer be paid for third and subsequent children, an exception was proposed for children born as a result of rape; so a mother would have to provide evidence, to a stranger, that she had been raped.

Lawlor isn’t the enemy, but his extreme reaction to such a simple, benign request shows how far we have to go in terms of how we tackle, and even discuss, the issue of rape. I’m hoping his photo starts a new hashtag: “This is what a rapist looks like.” And that men all over the world, from Jerry Sadowitz and Robert the Robot in Justin’s House, to Pope Francis and the Dalai Lama, will post photos of themselves holding these signs, in solidarity with all the tens of millions of rape victims around the world. Because a rapist could look like any one of them, as I’m pretty sure they’d all agree.