Written by Bridget Christie in The Guardian on October 31st, 2015 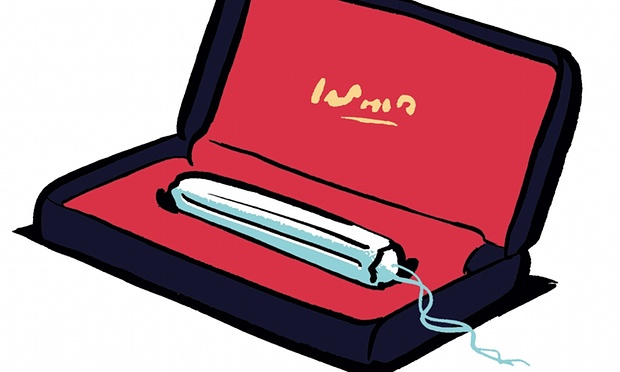 Jeremy Corbyn may not be fit to lead the Labour party because he’s humourless and only got two Es in his A-levels, according to the suspiciously unsmiling, Oxford-educated novelist Martin Amis. Amis describes Corbyn as “incurious about anything beyond his immediate sphere”, but at least he’s interested enough in the mysterious ways of the opposite sex to understand why sanitary products might not qualify as “non-essential luxury items”, which is more than you can say for most other male politicians. Corbyn understands why sanitary towels and tampons, designed to absorb a woman’s menstrual flow – and save her from making a right old mess of her underpants, seats on public transport, seesaws and Peter Stringfellow’s pole-dancing poles – do not qualify as a luxury and therefore should not be liable for VAT.

Narrowly missing out on a major commons victory over the Conservatives, Corbyn has nonetheless united Eurosceptic Tory rebels, the Liberal Democrats, Scottish Nationalists – and probably even Ukip, the Greens and the Women’s Equality party; something not seen in British politics since David Cameron was accused of putting a private part of his anatomy into a dead pig’s head. The amendment to the finance bill, tabled by Labour MP Paula Sherriff, which would have forced George Osborne into a negotiation with the EU for a reduction in the 5% VAT rate, was ultimately rejected by 305 to 287 votes – though the government has agreed to raise the issue with the European commission. It was understood to have been backed by Eurosceptic Tories including former Welsh secretary John Redwood and Steve Baker, who leads the anti-EU group Conservatives for Britain, as well as shadow chancellor John McDonnell – all men are believed to have signed up using cartridge pens dipped in menstrual blood, in a feminist protest.

The “tampon tax”, imposed in the 1970s by someone who clearly hated women and their “luxurious” reproductive system, was cut by chancellor Gordon Brown in his 2000 budget from the full 17.5% rate to 5%, after lobbying from female Labour MPs. But the price of sanitary products still puts them beyond the reach of many women. When I was a student, in the mid-90s, I would steal toilet paper from public toilets and use that, rolled up, instead of “splashing out on pads”. It wasn’t ideal and would often slip down my trousers because of the lack of adhesive strip (before you ask; no, I couldn’t afford Sellotape either). I’ve also heard stories of female students taking the combined pill without a break, in order to avoid having periods.

But it’s not only students doing without. This half-term, many food banks braced themselves for a surge in demand, as children went without their school meals. Tory cuts, childcare costs and low wages are leaving mothers desperate, having to decide between feeding their children, having the heating on, or the luxury of wearing a sanitary towel. The UN Human Rights office called the stigma around menstrual hygiene “a violation of several human rights, most importantly the right to human dignity”. In countries where sanitary products are unaffordable, girls miss days from school and women lose pay. In many US prisons, women have to buy their own sanitary products, and with tampons costing as much as $5, many go without.

Single-issue campaigns and activists, such as Laura Coryton, whose change.org petition to end the tampon tax has gained more than 252,000 signatures, are often singled out by anti-feminists and idiots for not focusing on the “bigger” issues facing women, such as female genital mutilation, early or forced marriage, domestic violence or rape. But the anti-feminists and idiots seem to forget that the women who are facing those issues also have periods, for which they are taxed, and that being able to manage those periods is a matter of dignity and a basic human right.

I’ve been suggesting that, until the government lifts VAT on sanitary products, women instead use items the chancellor considers essential and which are therefore tax exempt to absorb their menstrual flows – such as crocodile meat, herbal tea, flapjacks and alcoholic jellies – and dispose of them in irresponsible and unhygienic ways, in public spaces. I haven’t seen any evidence of that revolution yet, but I live in hope.

Previous What does a rapist look like anyway?
Next 650m reasons to dislike Andrew Lloyd Webber