Written by Bridget Christie in The Guardian on October 6th, 2015

The bestselling author says she wants to write a lesbian romp, but is that really what her readers want? After all, lesbians don’t have sex in the same places straight women do, like around horses or money 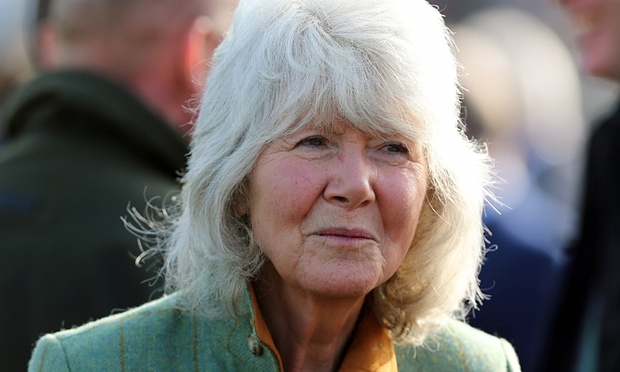 Jilly Cooper OBE has just noticed lesbians. Talking to an audience at the Cheltenham literary festival, the 78-year-old bestselling author revealed that she “wouldn’t mind” writing her very first lesbian sex scene, and that she’d been thinking about writing passionate romps between women as “there seems to be a lot of it about now”.

I don’t know if there were any lesbians in the audience, or if they were asked whether they “minded” if Jilly Cooper OBE wrote one or not, or, indeed, if anyone pointed out to her that the earliest known mention of “it” in surviving historical documents is in the Code of Hammurabi, a well-preserved Babylonian law code of ancient Mesopotamia, dating back to about 1754BC, and that there has probably been a lot of “it” about for around 200,000 years now, and where the hell had she been, but if Jilly Cooper OBE does decide to write about lesbian sex as realistically as she writes about heterosexual sex, it will be a blessed relief to lesbians all over the world, I’m quite sure of that.

Even though Jilly Cooper OBE is straight and has no formal education in lesbian sex, she is good at characters and can’t be any worse than the male writers of Prisoner: Cell Block H or Lesbian Vampire Killers. I, for one, can’t wait. And I’m not even a lesbian (even though my husband is convinced that I am and that he is a beard and that it’s only a matter of time before I come out).

I already want details. Where will the lesbians be having their sex in Jilly Cooper OBE’s lesbian bonkfest? She’ll have to think about all that. Context is everything in lesbian sex. She’ll have to do her research properly. Lesbians don’t have sex in the same places straight women do, like around horses or money. Straight women, as Jilly Cooper OBE knows too well, only have sex in paddocks and tack rooms and stables or banks and building societies and up against those armoured security vans. That won’t work for Jilly Cooper OBE’s lesbians. She’ll need to have them fumbling around in welder’s yards, or steaming up the glass display case at the suffragette exhibition in the Museum of London, or getting “hot under the collar” among all the boxes of DMs in the store room at the back of the Dr Martens shop in Camden Town.

I don’t know where lesbians are supposed to have sex in steamy bonkbusters; like I said, I’m not a lesbian. Although I am a feminist, which apparently amounts to the same thing in certain places, such as the online comments section under my columns, and in my own house. I hope Jilly Cooper OBE does her research or there will be a lot of disappointed lesbians out there, many of them friends of mine. Only the other night one of my lesbian friends said to me melancholically, “I do love Jilly Cooper OBE’s Rutshire Chronicles, but I wish she’d write a sex scene for us. I just sometimes feel like I’m not being represented at all.”

Jilly Cooper OBE’s novels are international bestsellers, they are wonderfully funny and silly and they make a lot of people very happy. I like Jilly Cooper OBE. When she takes her dog for a walk and forgets his lead, she takes her bra off and uses that instead – what’s not to like? Cooper knows her audience and she gives them what they want. I’m just not convinced it’s lesbian sex, and I worry about her angle. When her publishers toned down the cover of her 1985 international bestseller Riders, which featured the hand of an old, male, Butlin’s Redcoat employee firmly placed on a young woman’s bum, she was outraged. “I adore my publishers, but I was shocked when I realised how they had cleaned up the jacket. Is this bowdlerising more an attempt to appease the sensibilities of the politically correct than an indication of a growing national prudishness?”

“You can’t even say ‘I don’t like red hair’ any more,” she said, immediately losing her own argument, by being allowed to say the thing she said she wasn’t allowed to say. Some considered the new cover to be more ‘respectful’ of women, but others considered it a sop to feminism.

I hope Jilly Cooper OBE does write a lesbian sex scene, and I hope she gets it right, but her obvious contempt for what she considers political correctness gone mad is a worry. We’ve made huge strides forward in terms of gay rights, but there’s still much to do in terms of how society views lesbian, gay, bisexual and transgender people. I’ll never forget Stella Creasy (who, by the way, was criminally overlooked in Jeremy Corbyn’s new cabinet), masterfully calling out the audience of Question Time during a debate about the Ashers Bakery in Belfast, whose owners were found guilty of unlawful discrimination based on sexual orientation for refusing to make a cake for gay rights activist Gareth Lee. Creasy, who was rightly offended by laughter from the audience when she asked David Dimbleby how he would feel if he was discriminated against for his sexuality, said: “We are laughing about homosexuality, which tells us the way we’ve got to go to make Britain a country where everyone is free.” So I’m all for a lesbian sex scene in the next novel by Jilly Cooper OBE – let’s just hope Britain is.

Previous The Cereal Killer Cafe attackers should seek out the real villains of gentrification
Next What does a rapist look like anyway?