Oh, to be Jeremy Clarkson! Clearly, I’ve been playing to the wrong crowd

Written by Bridget Christie in The Guardian on November 21st, 2015

‘Clarkson, free from the shackles of accountability to either his fans or his friends in government, has become a martyr for the right’ 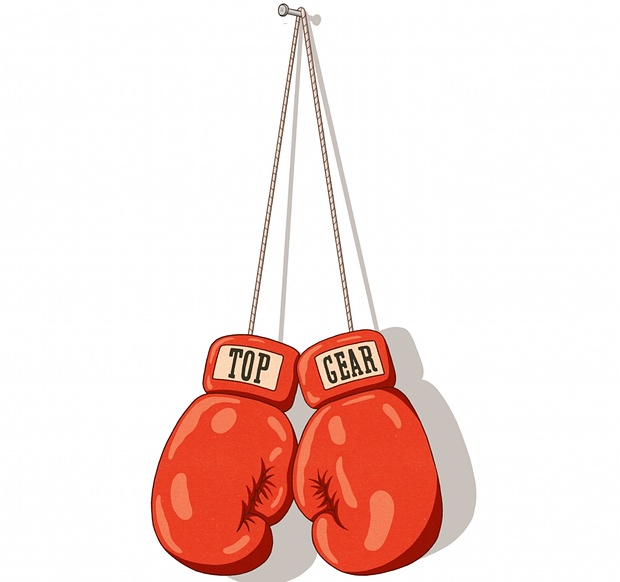 When I started doing standup about feminism, two things happened. The first was that pick-up artists, men’s rights activists and Top Gear fans stopped waiting for me after gigs with flowers and chocolates and engagement rings. Not all of them, but the vast majority.

The second (and far more problematic) thing was that feminists started coming, and waiting for me afterwards with flowers and chocolates and engagement rings. Suffice it to say that this cross section of ideologies made for a much less orderly queueing system.

My new leftwing, liberal, feminist audience made my job much harder. As you are all well aware, the left (and particularly feminists) have no sense of humour. It is easier to make a roomful of mourners laugh than a roomful of feminists. Just ask Germaine Greer, whose subtle, nuanced irony is often taken at face value.

But not only do feminists have no sense of humour, they don’t want anyone else to have one, either. Once, during one of my shows, a prominent anti-humour feminist gagged a laughing male audience member by stuffing four Always Ultra night-time sanitary pads into his open, laughing mouth. Sometimes, I long for the good old days when I was just heckled by men to get my mammaries out.

Unfortunately, now that I’ve unwittingly attracted an intelligent audience who care about humanity and injustice, I’m held to a much higher standard. Rightly or wrongly, everything I say is scrutinised and picked apart for inconsistencies or flaws – something rightwing commentators need never worry themselves about.

When Katie Hopkins declared on This Morning that her children would not be permitted to play with feral, common kids named after geographical locations, such as Brooklyn or London, even though her own child is called India, no one cared. When I criticised the pen manufacturer Bic for inventing an ergonomically designed, gender-specific pen for women’s hands, the Bic For Her, and subsequently called my book A Book For Her as a satire on gendered products, I was called out for having “double standards”.

Most of the time, though, I’m grateful for my enlightened audience. At least they remind me how to behave. And if, as Jeremy Clarkson allegedly did, I subjected a colleague to a sustained verbal attack, which included me calling him a “lazy, Irish cunt”, then punched him in the face, which resulted in him needing hospital treatment, I’m pretty sure my audience would feel disappointed. I’m not sure a million of them would sign an online petition calling on the Leicester Square theatre to reinstate me; it’s unlikely David Cameron’s daughter, Nancy, would go on hunger strike until I was allowed back on Radio 4’s News Quiz; I doubt the police would allow Laura Bates from the Everyday Sexism Project to drive an armoured vehicle through London to deliver the petition to Broadcasting House – unless she was waving pom-poms.

And so it was that Clarkson, free from the shackles of accountability to either his fans or his friends in government, became a martyr for the right; his attack on his producer, Oisin Tymon, for not providing him with a hot steak was transformed from a straightforward case of bullying and violence in the workplace into an issue of free speech; the BBC’s entirely appropriate decision to suspend Clarkson, pending an investigation, became a triumph for the politically correct brigade.

Clarkson, although sacked by the BBC, lost no fans through his actions. Far from the incident ending his career, he can now look forward to a hugely lucrative contract with Amazon. What a wonderful example to set for Britain’s children. And Hopkins weighed in again, calling on Tymon to “man up” – as though it’s up to the victim to deal with bullying, rather than it being up to idiots to learn how to behave, and to those in positions of power to punish them.

Now, Tymon has decided to sue Clarkson for racial discrimination. In the days following the attack, and faced with death threats by Clarkson-loving louts, the Top Gear producer maintained a dignified silence. Clarkson, meanwhile, used the media furore to gain political points by tweeting Ed Miliband: “Sorry Ed. It seems I knocked your ‘I’m a human’ piece down the news agenda.”

I expect Tymon, aware of how Clarkson’s career and behaviour is unaffected by the incident, has decided to seek some justice. Me? I’m just trying to write bigoted material in order to cultivate more of a right-leaning audience: I need a break.

Previous Want to avoid other people’s music? May the force be with you
Next Feminism is off the syllabus – so the battle is won, right?