Feminism is off the syllabus – so the battle is won, right?

Written by Bridget Christie in The Guardian on November 28th, 2015

‘Now I don’t want to sound paranoid, but a pattern is starting to emerge’ 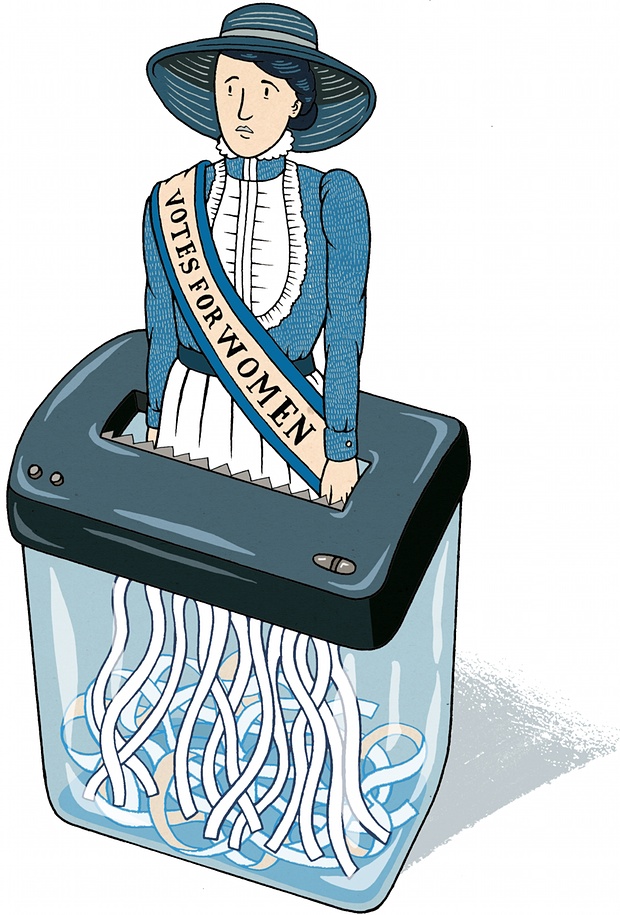 In a surprise move by the normally pro-women Conservative government, feminism is to be dropped from A-level politics. Women were taking up far too much room on the syllabus, which meant that some men didn’t have the requisite amount of space required for the proper ventilation and comfort of their genitals. So the women had to go.

In a revised version of the course, which is to be put to consultation, the section on feminism has been removed, along with any mention of gender equality and the patriarchy, and replaced with lots of drawings of ejaculating penises, from the pen of education secretary and minister for women and equalities Nicky Morgan. Gender equality is all very well in theory, but it’s just not practical when you try to implement it on the A-level syllabus – or on public transport.

Now I don’t want to sound paranoid, but a pattern is starting to emerge. A few things have happened recently – and, indeed, over the last 200,000 years – that make me think there are some individuals in positions of power who are unenthusiastic about the emancipation of women. There seems to have been a concerted effort to airbrush from the history books the women who were not married off at three, or who did not die in childbirth.

Before I started reading up on women and feminism in 2013, after I saw a gap in the standup comedy market, the only famous women I knew of were the Virgin Mary, Margaret Thatcher and Esther Rantzen – and I didn’t want the careers of any of those women. Had I known about Hatshepsut and Eva Peron and Linda Carter earlier, I might have won a Chortle award before I was 42.

But it’s no joke. In January this year, the ultra-Orthodox Jewish newspaper Hamevaser digitally removed all traces of women from a photograph of a unity march after the Charlie Hebdo attacks in Paris, due to modesty concerns. When world leaders linked arms to march against terrorism, Angela Merkel, immodestly dressed in a long, woollen coat, gloves and a scarf, was removed from the image. Hamevaser also cut out the mayor of Paris, Anne Hidalgo, though the picture editor left her dark glove on the sleeve of a marcher. I like to think of that glove as the ghostly, decapitated hand of Mary Wollstonecraft, a feminist version of Thing from The Addams Family, which goes around slapping misogynists’ faces every time they say something stupid.

Then, a few weeks ago, the British Passport office unveiled the new Creative United Kingdom passport, celebrating 500 years of British talent, but was able to think of only two women against seven men: the mathematician and writer Ada Lovelace and the architect Elisabeth Scott. Naturally, Scott’s face was superimposed on to the body of a cheerleader and Lovelace was pictured inside a giant cocktail glass, licking a cherry.

Now Nicky Morgan, who presumably feels she’s done quite enough for women in the year she’s held the post, has decided she no longer sees the need for feminism on the A-level syllabus. Surely, if we’re serious about achieving gender equality, we need to educate and inform our children, for they will inherit the Earth, or what’s left of it – and that includes teaching them about the battles fought and won by women, for the benefit of all humanity. Removing feminism from politics is like removing the female reproductive system from biology.

I’m doing my best, but I’m out of my depth. I often have very young girls in my audiences. Once, a group of teenagers sat horrified in the front row for the first 15 minutes – and who can blame them? What’s not embarrassing about a shouting, middle-aged Gloucester woman who’s just said the word vagina and whose mock outrage involves spit dribbling down her chin? But then, afterwards, these girls tell me that they found the link: they made the connection between feminism the ideology and feminism the life tool; they saw how being called slags for not flirting with the boys is connected to being cat-called on the way to and from school; and how their looks are still considered the most important thing about them. And how the issues they face simply for being girls are connected to issues that every girl and woman faces. And that the battle to resolve all these issues is called feminism. But these girls should know all this already, because they should be learning it at school.

Previous Oh, to be Jeremy Clarkson! Clearly, I’ve been playing to the wrong crowd
Next Now we have proof, at last, that the midlife crisis is real