No one wants to talk about Brexit – and if we don’t, it will just go away. Right?

Written by Bridget Christie in The Guardian on August 27th, 2016

The EU referendum has exposed a nation divided in a a way we have not seen since the white-and-gold (or blue-and-black?) dress phenomenon 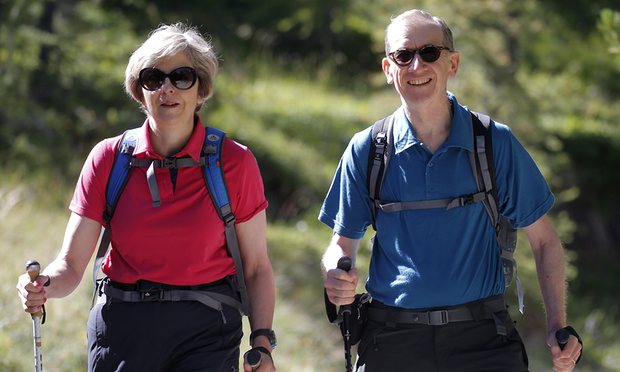 It’s now nine whole weeks since Bregsit, and I don’t know about you, but I’m absolutely sick to death of people talking about it. Especially people who can’t pronounce it properly, such as our new prime minister, Theresa May, whose walking holiday in the Swiss mountains gave her a chance to admire stunning views of a country struggling to implement its own 2014 EU referendum result. Thank God we’ve left the undemocratic EU and got rid of all those unelected Brussels bureaucrats who’ve never done a day’s work in their lives (apart from the odd shift of cardiac surgery). If we hadn’t, we wouldn’t now have an undemocratically appointed prime minister no one voted for.

Anyway, enough harping on about Brexit. I’m trying to focus on my garden, which takes my mind off it. My favourite plant is my potted fuchsia. Fuchsias aren’t native to Britain, of course: most are from South and Central America – and very welcome they are here, too. By the way, you don’t need South American soil to plant your fuchsias in. In fact, most exotic plants thrive in British conditions and contribute far more to British flora than they take, so you don’t need to worry about some Syrian jasmine taking British soil away from an English plant.

There isn’t a finite amount of soil. If an English rose was waiting to be potted, for example, and a Polish corn poppy was potted first, that doesn’t mean that all of the soil in Britain is now gone. It just means that one particular bit of soil has gone, but there’s nothing stopping the rose from just using some other soil.

I can see why people might think that foreign plants coming over here are a drain on our soil, but the reality is the opposite. It’s a common anti-exotic plant misconception. What actually happens is that plants coming over create a demand for more soil, and for other goods and services, like plant food and pots and trellises, and more gardeners. In fact, if all the foreign plants and flowers we have here went back to where they came from, it would create a huge gap in the economy.

In case you’re wondering what Brexit is (which is entirely understandable, given that it happened nine weeks ago and is therefore no longer relevant or worthy of discussion or analysis), it’s an abbreviation for Britain’s exit from the European Union, which we voted for on 23 June, by 52 people to 48 people. Why are people still bleating on about this? Don’t all the bremoaning dullards understand the democratic process? If you’re not happy about getting a thing you didn’t vote for, you just shut up about it and accept the thing unquestioningly. Challenging decisions you disagree with is just being a sore loser. This is why the country currently has no opposition and no hope of one any time soon.

People really need to move on, as I told my Polish babysitter three seconds after the results came in: “Stop whingeing and moaning about the xenophobic and racist abuse against your community and your uncertain future, doom-monger! Your relentless negativity risks damaging the UK’s economic prospects!”

But now is not the time for petty insults and further division. We need to talk about how this happened. The 23 June vote wasn’t just about EU membership; it was about inequality, class and political disillusionment. While we need to unite, we must never forget who got us here, and that means blaming the right people. It’s not each other; it’s the lying, scheming, reckless, narcissistic politicians who played politics with people’s lives, and the British media, left and right, who let us down. It is also entirely the fault of everyone who voted to leave, and I’m not going to stop bleating on about it.

Previous David Cameron is under pressure. Could that be sympathy I’m feeling?
Next Cheap razors are great but what if you’re a hairy woman who doesn’t shop in Tesco?