David Cameron is under pressure. Could that be sympathy I’m feeling?

Written by Bridget Christie in The Guardian on February 27th, 2016

I’m not saying that, in a fleeting moment of something resembling humanity, he has cured my Tory phobia, or made me like him more than a dying rat. No 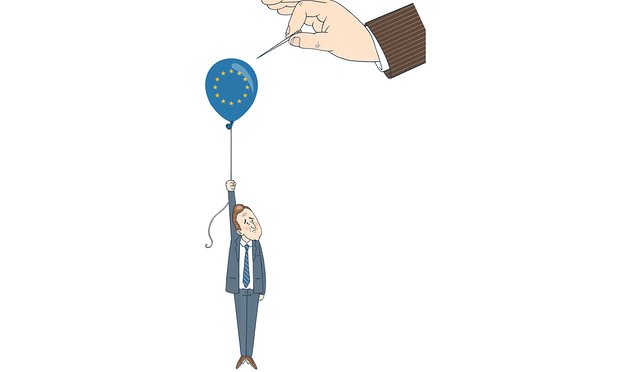 I can’t believe I’m saying this, but last Sunday I felt a tiny bit sorry for David Cameron. Don’t panic, I don’t fancy him (much as he tries to make me by ranting on about women’s rights) and I’ll never vote Conservative. I’d still laugh until I was sick if I saw him slip on dog muck, and I’d pay good money to seem him mud-wrestle sergeant Catherine Cawood from Happy Valley, after he’d said something condescending about prostitutes or northerners.

But I’m ashamed to say the prime minister’s look of desperation over the EU referendum on the Andrew Marr show last weekend brought a slight lump to my throat. At least that’s what I think it was. I’ve had a nasty chest infection for weeks now, so it’s more likely to have been some phlegm working its way out, which, as I keep reminding the children, “is better out than in, unlike Britain”.

I can’t help thinking about how conflicted all the reasonable, intelligent people who want to remain in the EU and find themselves agreeing with the prime minister must feel about that. And how all the intelligent, reasonable people who want to leave the EU must feel, to find themselves siding with the likes of Nigel Farage, George Galloway, Michael Gove and Boris Johnson (who has now proved, beyond doubt, to be the ruthlessly ambitious, manipulative, scheming backstabber we long suspected he was, not some harmless buffoon).

The fact that Britain now finds itself having to choose between an idiot from the Bullingdon Club and an evil narcissist from the Bullingdon Club over EU membership is both farcical and profoundly depressing. If Jeffrey Archer’s editor suggested a plotline in which the schoolboy rivalry of two Old Etonians caused political chaos across Europe, it would be rejected out of hand.

But the Marr interview was a rare display of genuine emotion from the prime minister, who is normally seen laughing at the poor, dehumanising refugees and migrants during PMQs, or blankly pointing at fish in Portugal on holiday. He looked like a man who actually believed in something, rather than a man pretending to believe in something, which has been his default setting.

I don’t know if it was fear – whether the sudden realisation that this is the vote that will define his legacy just hit him; whether he is genuinely passionate about remaining in the EU; if it was wind; or if he’d noticed Marr had conducted the interview in just his pants. But whatever it was, Cameron’s pleading face made me temporarily see him in a different light. It’s like the time my cat brought a live baby rat into the house. I’ve always hated rats, but watching this baby rodent heroically take on a massive cat against all the odds, up on its hind legs, literally boxing with its front legs like a tiny rat Barry McGuigan, cured my phobia.

I’m not saying that David Cameron, in a fleeting moment of something resembling humanity, has cured my Tory phobia, or made me like him more than I like a dying rat. No. I still think he has no grasp on reality, or any understanding of ordinary people’s lives, and holds immigrants, the poor, children, women and foxes in contempt.

I’m just saying I find myself agreeing with him on this one issue – possibly even sympathising. The nature of Johnson’s betrayal must have been a bitter pill to swallow. Informing his party leader by text 10 minutes before he announced his decision to join the out campaign, and scheming over dinner with Gove, Cameron’s close friend of 30 years, seems particularly ungentlemanly. You can just imagine Gove and Johnson cheating on Cameron while bingeing on Dairylea Dunkers and Doritos and learning to play the ukulele. Disgusting.

Anyway, all the hype over Johnson’s high-risk leadership bid will soon be over and we can get back to the serious business of the referendum. I have chosen this – my final column – to announce my intention to vote out. I’m sick of all these Polish paedophiles getting jobs in British choir schools over British paedophiles because of the bloody EU, and not being allowed to take the lid off my marker pen near a hamster in case it gets high. I want my own elected untrustworthy and corrupt British politicians to make disastrous decisions about the economy, health, the environment and human rights without having to run them by someone I haven’t even bloody heard of in bloody Brussels, which I hate.

Not really – and I don’t feel sorry for Cameron any more, either. He seems to have bounced back. Betrayed by his closest allies and with his party on the verge of a major split, he is the new David Miliband. Hopefully, this will mark the beginning of the end of the Conservative party. Then maybe the Women’s Equality party can have a turn.

Bridget Christie is touring from 8 March; go to bridgetchristie.co.uk for details.

Previous I have seen the future of sex education – and it’s privatised
Next No one wants to talk about Brexit – and if we don’t, it will just go away. Right?