Ritual Britain made me proud to be British

Written by Bridget Christie in The Guardian on June 28th, 2021

Morris dancers, druids, the Burryman – they’re all in Ben Edge’s spellbinding collaboration with the Museum of British Folklore, showcasing customs that stretch back into the mists of time 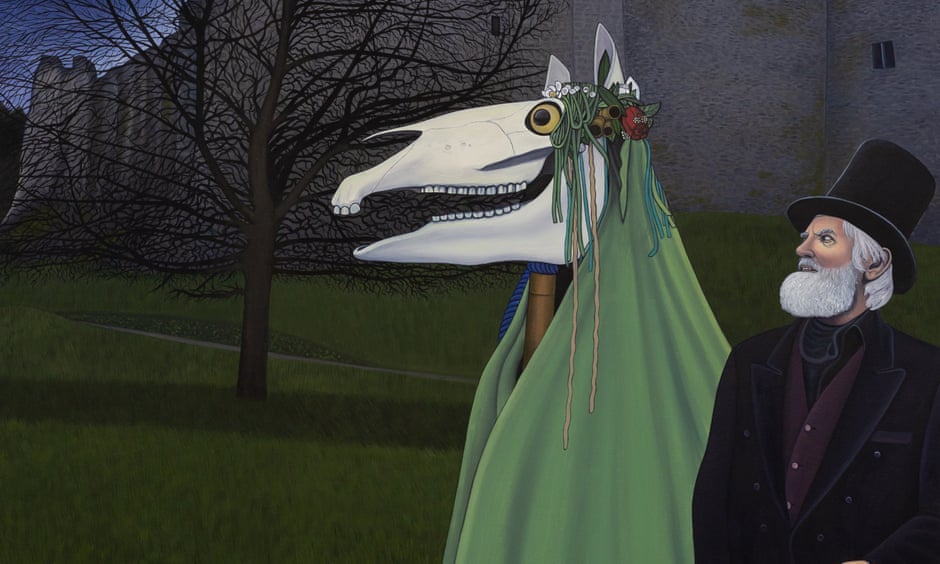 Exploring and celebrating Britain’s calendar customs, it’s a collaboration between the artist Ben Edge and Simon Costin from the Museum of British Folklore. It features 20 striking and evocative oil on canvas paintings from Ben’s Frontline Folklore series, alongside objects from Simon’s collection. These included dolls of Morris dancers, a burnt hessian glove from the Ottery St Mary tar barrel burning festival, a selection of folklore archivist Doc Rowe’s photographs and a tall, attractive, well-dressed man made of straw – who has apparently been lined up as Andrew Neil’s next guest on GB news as soon as the exhibition ends on 4 July. Also included in the exhibition is Edge’s illuminating and thought-provoking film Frontline Folklore, documenting the same 20 customs.

Edge’s obsession with folklore began by accident one day five years ago when he was on his way to meet the Ravenmaster at the Tower of London, but spotted a line of druids walking along the road and followed them instead. This chance encounter led to a life-changing journey across Britain, culminating in the film, the paintings and a collaboration with the MoBF. 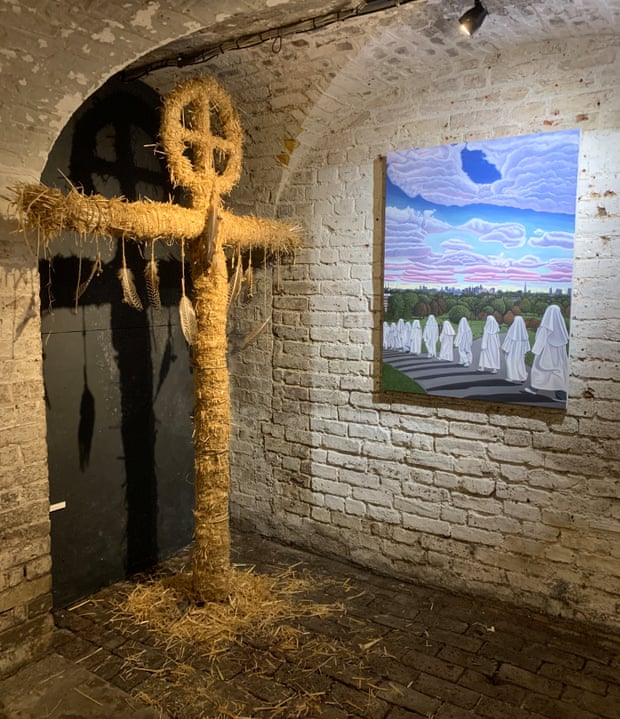 My own fascination with Britain’s rituals and traditions didn’t begin when I saw some druids walking through Tower Hill. It began in childhood, when I saw a massive cheese flying through the air.

I’m from Gloucester, and when I was little, my parents took me and my eight brothers and sisters to see the Cooper’s Hill Cheese-Rolling and Wake, which takes place annually every spring bank holiday, and involves locals chasing a 7lb Double Gloucester cheese down a hill with a 50% gradient. It made a lasting impression on me, and in 2006 I wrote an Edinburgh show about it, which ended with me re-enacting the cheese roll by rolling a mini babybel down a papier mache model of a hill I’d made, and chasing it with two figures attached to wires.

I’ve been on three different occasions to the Burryman’s Parade in Queensferry – in which a local man is covered head to foot in thistles and marched through the town drunk for over nine hours – but I didn’t stay to the end because I needed the toilet, and I wasn’t wearing a nappy like he was. I also had Morris dancers at my wedding, and for the past two years I’ve been working on a pilot script for a comedy drama about ancient traditions and folklore in the Forest of Dean. 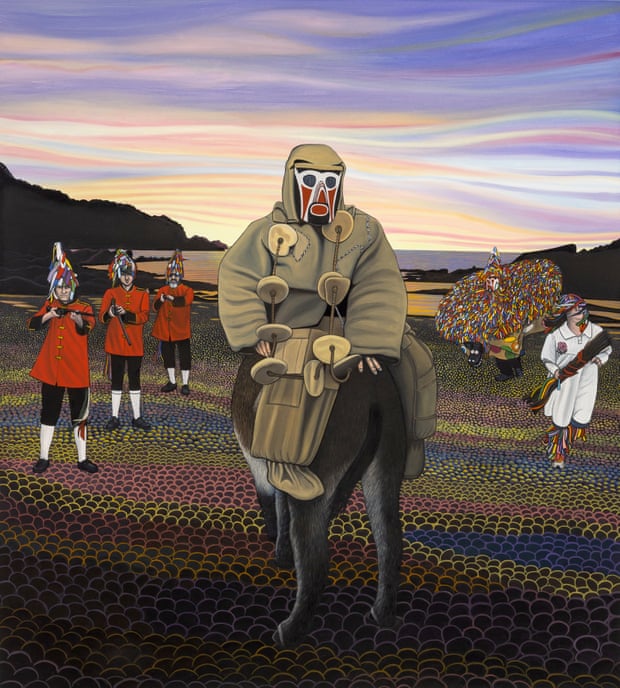 The origins of the cheese roll are unknown. One theory is that it’s a pagan ritual intended to bring luck to the harvest, but no one really knows, and it’s the same story for most of these events.

For Edge, it doesn’t matter that so many of the original meanings have been lost. It’s precisely this lack of clear, historical facts that makes these bizarre customs so appealing to him as an artist. The uncertainty creates a space for us to insert ourselves into them. It allows us to embellish and add to them – and it’s in the retelling of these stories that we keep them alive. They’re not relics from another time. They tell us who we used to be, but they also tell us who we are now, and who we want to be. They change and evolve just as we do – and they’re changing all the time. In response to the Black Lives Matter movement, many Morris dancing groups, such as the Hook Eagle Morris men, changed their black face paint to blue. Other groups refused to, claiming they’d be disrupting an ancestral tradition. 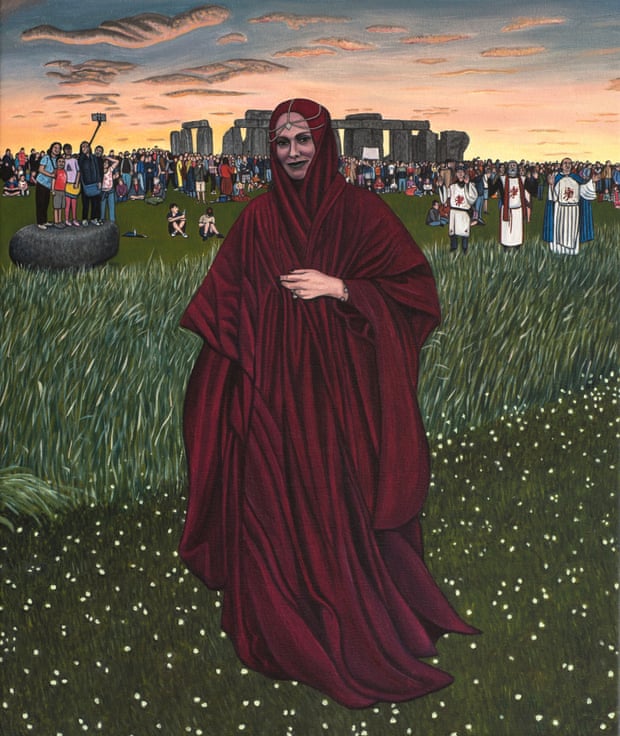 What’s startling about Edge’s paintings is that they manage to look both ancient and modern at the same time. He’s bringing the past into the present in a really unusual, interesting way. In The Autumn Equinox, we see the ancient cloaks of the druids set against London’s skyline; in The Britannia Coconut Dancers, the men’s 18th-century costumes contrast with 21st-century wind farms; in The Summer Solstice, people take selfies in front of Stonehenge. The world around us might have changed, but humans’ basic need for stories and rituals remains the same.

Lockdown took all our rituals away from us, so we made our own: we stood in our front gardens and banged saucepans. We need rituals. Rituals mark the passage of time. Rituals, and the onset of menopause.

Ritual Britain made me think about so much – about patriotism and heritage, community and social cohesion, time and tradition, stories and class; about what art is and who it’s for. I was expecting to love this exhibition. I wasn’t expecting to leave it feeling proud to be British – especially as I have an Irish passport, thank God.

Previous I’m obsessed with a pair of pants I saw in a bush on my lockdown run
Next Comedian Bridget Christie: ‘I see my flasher’s penis all the time. But I can make horrible things amusing’