Now we have proof, at last, that the midlife crisis is real

Written by Bridget Christie in The Guardian on December 5th, 2015

Happiness is U-shaped, like the back of a toilet, a German submarine boat, or the letter U 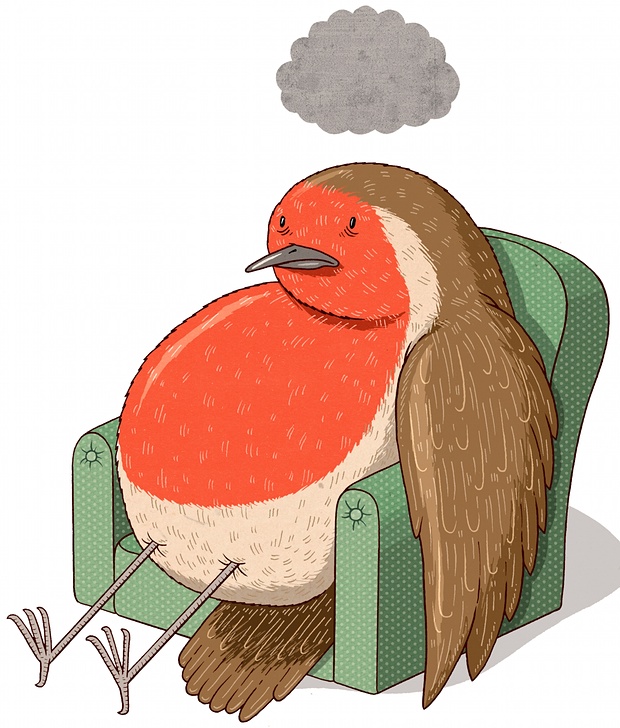 Just lately, I’ve been worried about my ability to experience happiness – to revel in the inherent joy of things without being immediately bogged down by the profoundly depressing quagmire that is current world events. And my laundry basket.

For example, there is a criminally cute little robin that regularly comes into my garden around this time of year and pretends to look for worms. (One year he’ll drop the facade and just ask me outright if he can be on the Christie family Christmas card, and I’ll oblige, but for now I’m enjoying the bantz.) When I first see him, my heart sings, but within seconds I wonder how long it will take for him and his ilk to become extinct as a result of climate change, or blown up for his libertarianism.

I’m hoping this melancholic phase passes soon. But it seems my recent gloomfest might not be the fault of morally bankrupt oil companies or lying German car manufacturers or Islamic fundamentalists, but in fact down to my age.

New research has found that life satisfaction gradually declines from early adulthood, reaching its lowest point in our early 40s, and then rising again when we’re about 70. So all we need to do is stave off any debilitating diseases, or death, between the ages of 40 and 70 (some might say the optimum period for these events), battle through underfunded social care support, and then it’s all plain sailing. We can look forward to our final years with a spring in our step and a rose between our false teeth.

So that’s the good news. There is light at the end of the tunnel for those of us run ragged by midlife responsibilities; crushed by the administrative demands of mortgages and small children, dried out old husks who can’t remember nouns, which I’m convinced all came out of me during the birth of my first child (whose name escapes me).

The bad news is that we’re not allowed to blame our babies and toddlers (who are obviously to blame). According to a forthcoming paper, which followed 50,000 adults in Britain, Australia and Germany, “The existence of this midlife nadir is not because of the presence of young children in the household. Adjusting for the number, and the ages, of any dependent offspring leaves the pattern unchanged.” The authors are all leading economists, but they’ve clearly never met any small children, let alone lived with them.

Our 40s are when we work hardest, while at the same time caring for young children and often elderly parents, too. Now we have proof, at last, that the midlife crisis is real, and that happiness is U-shaped, like the back of a toilet, a German submarine boat, or the letter U.

As for me, I am happy, but a practical, sensible sort of happy. If my happiness were measured in coats, it would be a waterproof jacket rather than a full-length mink. I’m reasonably jovial in social situations or at children’s parties, but I’m not going to put my back out with happiness, not the way I did in my youth. A combination of losing my mother and childbirth, trolls and quarterly tax returns have taken the edge off my eternally positive outlook on the world. But it’s all under control now. It’s been reined in. My happiness is wearing Spandex. I call it “40s happy”: the sort of happiness a robot might display, or a cast member from The Only Way Is Essex.

The happiness of my youth was sunny and spontaneous and unburdened. My family’s nickname for me was Breezy. Now, it’s more sober, affected by sleep deprivation and rolling news and responsibility. Every wave of happiness is followed by a wave of dread and anxiety; about my children’s future, about the future of the planet. It sometimes feels like I’ve forgotten something I can’t quite put my finger on. Being happy shouldn’t feel like another thing to add to the list of daily chores, like putting the bins out or de-worming the cat or being enthusiastic about my husband’s shelving (which, I have to admit, has made us both deliriously happy).

But maybe I’ll just have to suck it up until I’m 70. Hopefully, my robin will still be alive in 26 years’ time, and I can finally get that card printed.

• Bridget Christie appears at the Leicester Square theatre, London, on 2 and 8 January 2016.

Previous Feminism is off the syllabus – so the battle is won, right?
Next Hilary Benn and the trouble with audiences