Written by Bridget Christie in The Guardian on November 7th, 2015

He flew in to vote in support of tax credit cuts for the working poor. Time to send in the cats 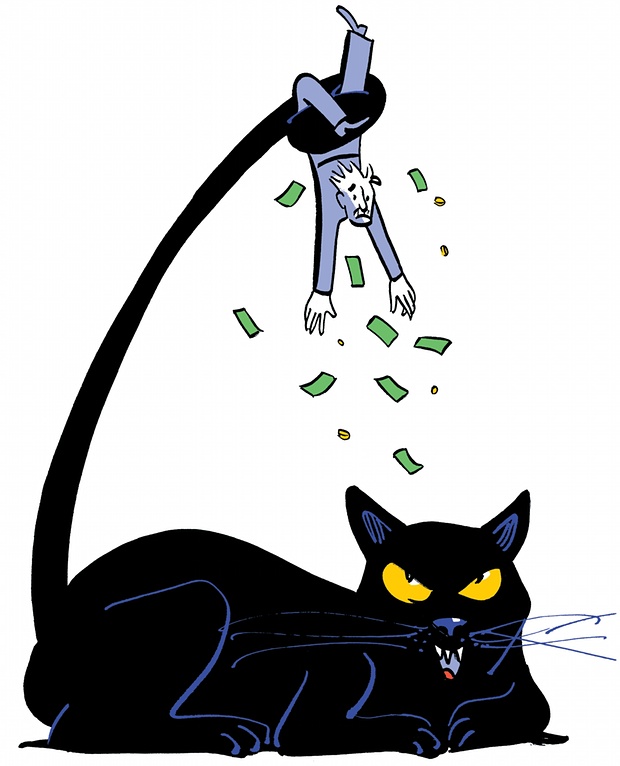 A few years ago I did a routine about The Right Honourable, The Lord Lloyd Webber, also known as Baron Lloyd Webber of Sydmonton in the County of Hampshire, also known (by me and my 2007 Edinburgh fringe audience) as Andrew “monk in a wind tunnel” Lloyd Webber. It revolved around The Lord (who’s worth about £650m), his musical about cats, called Cats, and my own cat, called Alan, who became so nervous during a casting for the part of Old Deuteronomy that he did a smelly mess on stage right in front of The Lord (£650m).

This traumatic, diarrhoea-based musical theatre experience resulted in Alan associating The Lord’s face with the act of defecation, which subsequently led to him being able to discharge fecal matter only if he saw him on the telly or in Hello! or OK! Since then (I told my audience), a photograph of The Lord’s £650m face had been stuck to the wall above Alan’s litter tray.

Sometimes, for my own amusement, I’d even edit the first paragraph of The Lord’s Wikipedia entry so that it read, “Baron Lloyd Webber (born 22 March 1948) is an English composer and impresario of musical theatre. He is also a cat laxative.” It never lasted more than a few hours before a Wikipedia spy deleted it.

At the time, I felt slightly guilty about the routine. The Lord (worth around £650m) only wrote Starlight Express, I told myself, he didn’t stage The Final Solution: The Musical. I needed to start punching up. Then last week, The Lord (£650m) jetted in from New York to vote in support of tax credit cuts for the working poor. This immediately assuaged any feelings of guilt I may have had about the horrible monk-faced Tory, who has bothered to vote only 30 times out of a possible 1,898 since becoming a peer 14 years ago. Presumably because he was too busy being an extra in a windy episode of Cadfael?

The last time Webber voted was for same-sex marriage – so he loves gays but hates the poor. Anyone would think The Lord (£650m) cared only about his audiences. But how did he justify his trip away to His Honourable Lady? If my husband called me and told me he’d been to see a musical about cats (that he’d written) and cast a crucial vote in the House of Lords that would make millions of hard-working poor people poorer (people who voted Tory only because they promised not to touch tax credits), I’m not sure I’d have his dinner waiting for him. Or his cat.

Karren Brady, Michelle Mone, Julian Fellowes and Lord Coe also supported the cuts, but still the ermine-cloaked, moneyed idiots were defeated by 307 votes to 277. Rather than admitting they got it wrong, Cameron immediately ordered a review to make sure it never happens again.

As well as Webber (£650m) flying in to help kill the poor last week, we saw Kwasi Kwarteng, Tory MP for Spelthorne, laughing uproariously during the tax credit debate and Shipley MP Philip Davies filibustering for 93 minutes to block a bill by Labour MP Julie Cooper that would give full-time carers free parking in hospitals. It’s as if, like Labour, the Tories have decided to be authentic: to finally give up on pretending to care; to unencumber themselves from the shackles of empathy and humanity, and appeal to their core voters.

Mone, who made millions from bras, wrote on Twitter in response to a backlash for voting for the cuts, “work hard, don’t look for excuses, be proactive” – and do all this while wearing my sexy underpants, which shows staggering ignorance and a total lack of self-awareness; something that often eludes the wealthy and privileged.

I have a garden now, for the first time in my adult life (I’m 44). I love it, but I’m aware most people in London (where I live) don’t have one, or any outside space. Or hardly any indoor space. And they are still the lucky ones. So while I gaze admiringly at my garden, I also look at it with guilt. And if I was asked to fly to New York and vote in support of a bill that denied hard-working poor New Yorkers any outside space, I wouldn’t, because at the very least, I’d have some notion of how badly that would play.

Apparently The Apprentice viewers are boycotting the programme following Brady’s vote. Might I suggest a boycott of the musicals of Andrew Lloyd Webber, too? For there can be nothing more absurd and grotesque than paying £65 to see a musical, about cats, written by a monk-faced man who flew across the Atlantic to make hard-working poor people worse off. Oh and by the way, Alan didn’t get the part.

Previous Feminine products a luxury? Hardly. At least Jeremy Corbyn understands
Next Want to avoid other people’s music? May the force be with you