I hope I don’t die as a result of apocalyptic weather conditions or Islamic fundamentalism this year.

I chucked 3 mince pies in the bin today.  I’m ashamed of the waste, but they were starting to feel like my long- dead partner’s jackets, hanging in the wardrobe.  I need to move on now – from Christmas, and that twat.

I made that up by the way.  All of my ex partners are still alive.

My cat is too fat.  We’ve all been feeding him, thinking no-one else is,  because he keeps meowling all time as if he’s dying of starvation, but he’s been totally having us all on.

My jaw is killing me from trying to finish off all the children’s Halloween sweets.

I tried a face mask for the first time in my life last night. As it started to harden, I began to panic. I thought I was having some sort of face stroke or something, or that my “face nerves” were having an allergic reaction to the ingredients.  It didn’t say on the packet that my face would freeze up!  They seriously need to tell people I think.  If I was old and a face mask virgin, I might’ve perished.  It was a menthol flavour as well, so it was stinging and paralysing me at the same time.  It reminded me of the time when I accidentally got some chewing gum stuck on my vagina. Never get anything minty stuck on your nether regions, especially toothpaste or chewing gum, because it really stings.  By the way, no-one else was involved in this incident.  It was one of those freak accidents. I might write about it at some point, but I don’t want to go into it now.  By the way, I am very proud to have reached the age of 44 and not know what face masks do.  However, I am so impressed with the 69p face mask, that I have now booked myself in for a full face lift with a top cosmetic surgeon.

Their clothes are shit and boring and so the bloke in charge has quit.

Some unknown Labour bloke resigned live on television and no-one cared.
Diane Abbott wore a nice jacket with leather arms on Newsnight.
Corbyn seems to be the same person he was just before he was elected as Labour leader.
Boris Johnson said something about education I agreed with on the radio.
Cameron is a stupid twat.  So is Osborne.
Hilary Benn seems nice enough doesn’t he? Normal.  Inoffensive.
Where is Nigel Farage?  Has anyone seen him?
I liked the Star Wars film but hated James Bond, which was shit.
War Horse is the best thing I’ve seen since Black Watch.

It was too hot and so my Ceanothus in the front garden flowered, thinking it was spring.  Now it’s cold, because it’s winter.  I apologise to it every time I pass it, which is a lot of times every day.  I hope it can be bothered to flower again. I saw a flying ant on my bedroom window.  A lady (who’d lost her business and home in the floods) and who was speaking at the Environment Agency meeting before MP’s, pointed out that mussels are better protected from floodwaters than people in her town.

Thanks very much for coming to the run in November, and to the extra couple of dates.  They’ve put more dates on now so please spread the word. It’s a big room and I don’t have much time to flog it!  I won’t be doing the show again in London so please tell friends and family you think might enjoy it.

TOUR – A BOOK FOR HER

This is to coincide with the paperback release of A Book for Her, and I’ll be coming to a town near you.  I’ll be doing the show (A Book for Her) that you won’t have seen (unless you saw it in to Edinburgh or London) and I’ll be signing copies of the paperback so it would be nice to meet some of you.  Book early to avoid disappointment.  All dates here.

There are a bunch of charity gigs for very good causes and extra circuit gigs on the website too. 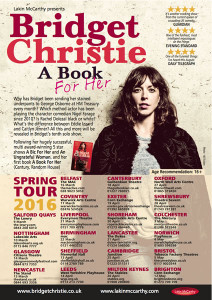 Previous News CHRISTMAS GREETINGS EARTHLINGS!!!
Next News LONDONERS: LAST CHANCE TO SEE “A BOOK FOR HER”