I am doing April’s newsletter a bit early because I don’t think I will want to do one in April. 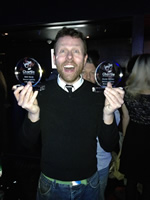 Thanks for voting for me in the Chortle Awards. I assume it was you lot???? Anyway, I was absolutely flabbergasted to have won anything at all, let alone 2 awards, especially as all the other nominees are much better than me. I wasn’t at the awards myself because I was doing a work in progress show so Michael Legge, who is so funny he is almost a woman, accepted the awards for me. Thanks again.

A BIC FOR HER

There are a few more outings of this at various festivals before I put it to bed for the summer and resume it again for the autumn tour. I’ll be doing an edited version of Bic, followed by an interval and then the next show, which is called Bridget Christie: An Ungrateful Woman. Once all the dates are confirmed I’ll let you know. Be great to get out and about around the country. Thanks for coming to the show in Glasgow by the way everyone. AND EVERYONE WHO CAME TO THE SHOW AT SOHO THEATRE.

See gigs list for all the new material nights and work in progress shows. Please come down and help me shape the show.

I’ll be recording the first episode of the new series up in Edinburgh. I’ll post a link up to it when it’s done so you can book tickets nice and early if you fancy it. Or you could just wait until it’s on, if my face annoys you.

The zip’s gone on my winter jacket. I took it into my local dry cleaner’s (where I’ve been going for many years) who refused to fix it and told me that I should be able to zip it up once I’d found the knack to it. I didn’t understand what they were talking about really but left anyway because it was obvious they just wanted rid of me and had bigger zips to fix than mine. The area I live in has become very gentrified in the last few years and I got the impression they were lumping me in with all the City twats who’ve moved in spoiled it. "Here comes another twat who can’t even zip up their own jacket" was the vibe I was getting. So I’m on my own here. I manage to zip it up about once every two weeks. It just randomly decides to work sometimes. Normally on really boiling hot days. I have to remember to keep it zipped up and lift the jacket up over my head like a jumper. The problem is, it makes my hair go all static, which makes me look stupid. I often get stuck in it as well, half way through getting it off, because my joints have stiffened up since I’ve had children because I don’t have time to do stretches or anything. Then what happens is I go out and get drunk to forget about my zip problems, forget the zip is broken and unzip my jacket all the way down when I get home! Then I can’t do it up again in the morning! I don’t really know how to break this cycle I’ll be honest with you. When will it end? The summer, I suppose, when I start wearing my thin waterproof jackets again. Then next winter I’ll have to decide whether to keep the jacket, or get the zip replaced. Anyway, I’ll be sure to let you know.

My cat killed something grey, but removed the head, tail and legs, so I don’t know whether it was a rat or a squirrel or the fattest, longest mouse in Europe. He then left this torso (which was in two parts) on the living room floor next to my 3 year old daughter’s toys to discover when she got up. I was so completely horrified and disgusted, but had to pretend to find it hilarious and "interesting" so that she didn’t freak out. We then went on a "treasure hunt" to find the missing parts so that we could complete the puzzle. We couldn’t find them.