Who needs self-help gurus? Here’s my free advice for decluttering your mind

Written by Bridget Christie in The Guardian on January 9th, 2016

If I have any unresolved issues, any stupid, niggly things or people ruining my days, it’s like an empty bag of crisps in my head, that rustles every time I think 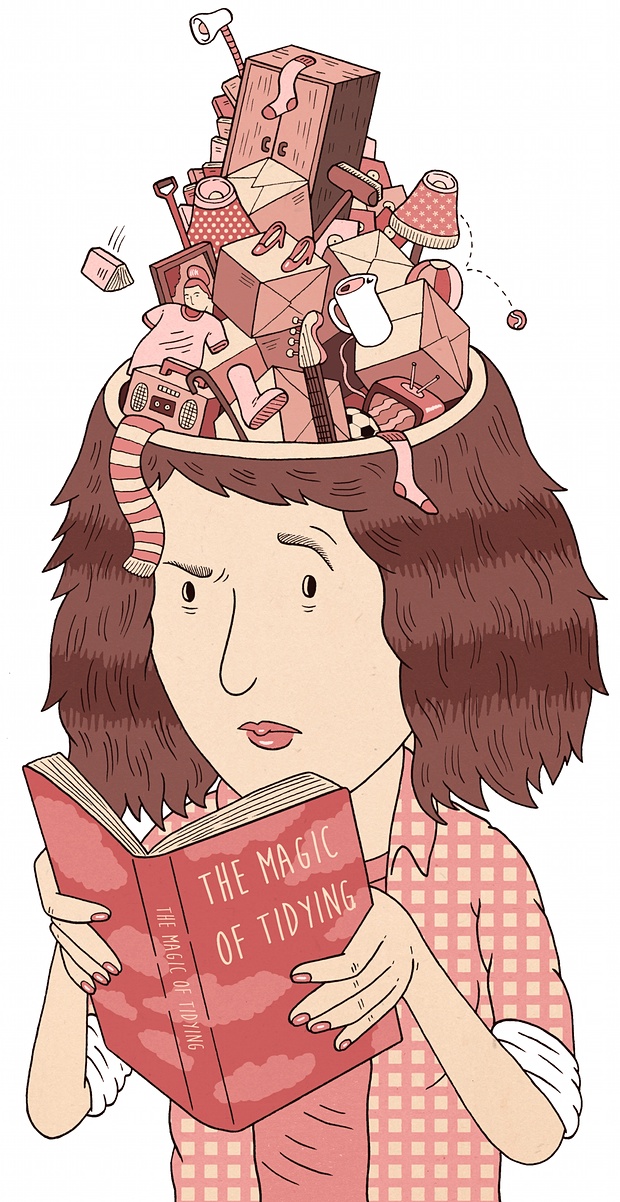 Happy new year! It’s a time for introspection and reflection, for new beginnings, and for writers and publishers of self-help books to exploit us at our most vulnerable.

Look, I’m not naive. The festive period has just finished. It’s reasonable to assume that most of us ate something when we weren’t that hungry, or bought something non-essential. I’m pretty sure my daughter didn’t need a WMF McEgg egg-cup-and-spoon set for Christmas, but the McEgg, which I presume is the egg’s surname, comes wearing a tiny hard hat (that keeps the egg warm), is holding a tiny hammer in one hand (to smash its own head in) and a tiny spoon in the other. Plus, as a Laurel and Hardy and Humpty Dumpty-loving Catholic, my daughter enjoys nothing more than violent slapstick and self-flagellating, humanised eggs. The makers of the McEgg cup and spoon set know this full well.

Flicking through the papers this week I was aghast and affronted at the sheer volume of interviews with and articles about lifestyle gurus, nutritionists, dieticians, sex therapists, hypnotists, yoga teachers, monks and nuns, all flogging their own brands of enlightenment. “Give full attention to whatever you are doing,” says acupuncturist-to-the-stars Gerad Kite, who has a new book out. “Try not to let your thoughts drift,” which mine already had before I got to the word “let”. “Make eye contact when you buy a paper,” the inner-peace advocate advises. What, with the paper? What if you pay at the self-checkout?

Anyway, as I sneeringly made my way through all the advice on diets and stress-busting cures, I stumbled across the following sentence from the Japanese queen of tidying, Marie Kondo: “Have you ever had the experience where you thought that what you were doing was a good thing but later learned that it hurt someone? This is somewhat similar to the way many of us treat our socks.” Yes, ha ha, hilarious – only Kondo is the one laughing all the way to the bank. Her book The Life-Changing Magic Of Tidying has been published in 21 countries, with 17 more to follow. In an interview, she explained that Europeans sometimes have difficulty understanding certain aspects of Japanese culture, one of which is the belief that inanimate objects have souls and are our equals. I like Kondo, and lots of her ideas make sense, but I’d like the world to start treating humans as equals before we start giving toilet roll holders and drain covers rights.

Kondo encourages us to talk to our possessions: “Hey slip, look at you, jet black and smooth as satin. You complement the line of my dress without ever stealing the show”; and “Dear screwdriver, thanks to you I put this shelf together in no time.” I can tell you right now that I will not do this. I barely speak to my own family, so I am not going to start bigging up the thermostat any time soon. I do, however, totally agree with her that decluttering can have a hugely positive influence on how you live your life.

When my mother died in 1997, I inexplicably threw out pretty much everything I owned. I didn’t have much anyway, and I don’t know why I did this – it just felt like the most natural and appropriate thing to do. I felt immediately better, almost cleansed. Since then, I’ve had sporadic “clearings out”. They normally coincide with the end of a relationship, moving house, or following an illness.

I also mentally tidy up. I don’t know anyone else who does this. If I have any unresolved issues, any stupid, niggly things or people ruining my days, it’s like an empty bag of crisps in my head, that rustles every time I think. Work-related problems are like unpaired socks laid out across my brain. Some problems/people can take up to six months or even a year to mentally tidy, but if I keep imaging them as festering litter that will eventually attract rats, they go away quicker.

Kondo thinks that external clutter is a symptom of inner unhappiness and that we hoard as a result of underlying, unresolved psychological issues. I once watched a very moving documentary about a hoarder who had kept parts of the car that had killed a relative. Perhaps it would be best for him to throw it away? Maybe then he’d finally be able to move on – or not? The best ideas are often the simplest and most obvious. It’s just a shame we all have to buy expensive books every January to work them out.

Previous The greatest gift of Christmas? A social media truce
Next Parenting advice? From a man who left his daughter in a pub toilet?