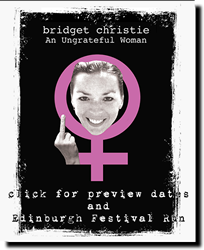 I have rather a lot of these as you will see from my gigs page.
This is to work out the new show “Bridget Christie: An Ungrateful Woman.”
I don’t quite know what this show is about yet, as I’ve only written a little bit of it.
Anyway, don’t let that put you off. If you’d rather wait until I’ve worked it all out you can come to the Soho Theatre run at the end of July (10-17th).
Or, if you want to see me perform in a hat, I’m doing a work in progress at the City of London Festival on 25 June.

The venue is a huge bowler hat, apparently. I’ve never performed in a hat before.
Well, I’ve performed wearing a hat, but not actually stood in one, if you know what I mean. I might wear a bowler hat as well, just so that I can do an opening joke about being “in” a bowler hat.
That should kick everything off on a high. Unless the venue doesn’t look very much like a bowler hat because they ran out of money half way through. Then people won’t understand why I keep going on about bowler hats. I’d have to explain that the venue was supposed to look like a bowler hat, but they ran out of money.
I think I’ll get there and have a good old look at the venue before I decide to open with a bowler hat joke.
I think that’s my best bet. Especially as I’ll be doing a preview.

I’ve organised this. Come please.
Line-up is ridiculously good. Kitson compering, Isy Suttie, Shazia Mirza, Jo Brand, Stewart Lee.
I put myself on the bill too as I will be there anyway, making sure the acts have enough toilet paper etc.
All proceeds are going to the Manor Gardens Health Advocacy Project who do great work on supporting FGM survivors.

Book now – THEY WILL GO!!! (TICKETS HERE)
Also, Leyla and I are making a very short film together to be shown on the night.
I hope I can write it in time. Otherwise it won’t be shown.

RECORDING – Ep One. BBC Potterow, Edinburgh 24 August 9pm
I’ll be recording the first episode of Series 2 up in Edinburgh. I don’t think tickets are available yet – but I’ll let you know when they are. Oh yes, I haven’t started writing this yet either – but very much looking forward to working with Fred Macaulay again, my favourite Scottish male comediennes.

Not doing too much of this at the mo as I’m too busy with live work and writing me old book, but am recording an episode of the new Saturday night quiz show Celebrity Squares with Warwick Davis on 6 June.
I’ll let you know TX dates when I get them. It doesn’t seem like the sort of thing I would normally do, does it? But I’m really looking forward to it. I’ll tell you all about it after.
I’m sure some right old wacky things will happen.

A plastic thing has come loose on my car door.
It came loose about 3 years ago, but it’s really getting on my nerves now, as it smacks against your leg when you’re getting in. I should really get it fixed but I’m really not at all interested in things like that. Please don’t get in touch with me if it’s your job to stick these things down.
I don’t want to have to arrange to meet someone about this. I just don’t have time at the moment. Also, what would we talk about? All the other bits of plastic that have come off other car doors that you’ve fixed?
There’s not much you can say about bits of plastic coming loose from cars doors, is there? I mean, perhaps if my plastic was a different colour to all the other bits of plastic you could say, “Oh? I’ve never seen a black car with a blue plastic bit before, the plastic bit is normally the same colour as the car “…stuff like that…”
I wouldn’t really be able to pretend that I’m interested, as I am only interested in talking about myself at the moment. Right, I think that’s quite enough about that subject don’t you? I’m going to sellotape it down, I think.