‘I don’t do jokes about my personal life. Just my husband, my kids and my polyps’

The comedian Louise Reay is being sued for allegedly defaming her estranged husband on stage. So should standups keep their private lives to themselves? 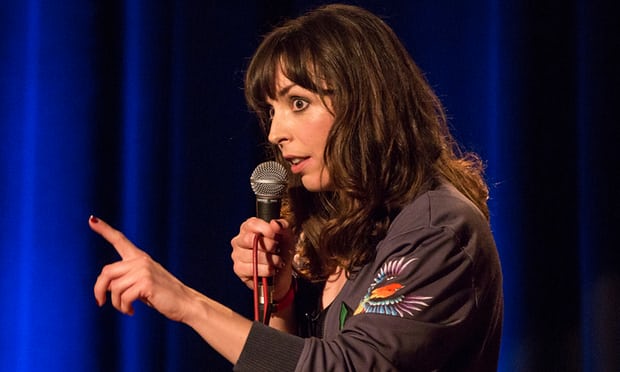 I’m not a confessional standup. I don’t know what I am. On the whole, I haven’t mined my personal life or relationships for comedy. Yet. Who knows what direction my work will take in the future? There is still time. I am only 46.

Not that I don’t love confessional standup. I do. It’s given us some of the most groundbreaking, pioneering comedy we’ve had and it’s hard to imagine what standup would look like now if Richard Pryor had never existed. It’s just not something I’ve felt hugely comfortable doing. I’ve told the odd routine about my “husband”, “children” or “upbringing”, but they’ve generally been lighthearted, hugely exaggerated, or untrue, and even then it makes me feel uneasy and anxious.

It’s partly because of my upbringing. My Catholic parents were very private, and we were brought up to never tell anyone about anything, ever, especially where we got our ice cream from and all the materials for making the shed. This culture of secrecy made confession very awkward for me and very boring for my priest. Not that I ever had anything interesting to tell him anyway. I always remember thinking: “I’m seven. Apart from nicking a biscuit and flinging a worm into next door’s garden with a stick, I haven’t really got anything. Is there anything you’d like to get off your chest, Father?”

So I am quite guarded, on stage and in life, generally. Not with my feelings – I just don’t like giving away too much personal detail. So I’ll tell my children how much I love them, they just don’t know where I live.

But there are many different ways to tell a story. My truth is how I feel about things, rather than what has happened to me. I tend to use the world as inspiration for my material, and then insert myself into those stories – like the Where’s Wally of standup. For me, personal anecdotes are embellishments, a way of connecting with the audience, of humanising bigger issues. And while I’m very relaxed doing personal material about myself, I’m much more cautious when that material involves others.

It fit perfectly into a routine I had about the importance of cervical screening (one in three women aged between 26 and 29 don’t turn up for their appointments because they’re embarrassed by their hairy, weird vaginas), which fit perfectly into an earlier routine I had about trivets. Luckily, my polyp was removed in an amusing way. It was spotted during a routine smear, which also had its comic moments, as right before I went in to see the practice nurse I’d had a massive argument with a stupid, shouting racist in my surgery’s waiting room. So I was a bit tense to begin with and it went downhill from there, really.

Anyway, I have no problems performing this story. There is no part in the telling of it that makes me feel anxious, and it’s got vaginas and racism in it. But I would feel uncomfortable with portraying the polyp in an unfavourable light and divulging intimate details about my relationship with the polyp, or the size of the polyp (enormous), without at least changing the polyp’s physical appearance and personality beyond all recognition. Not that you can libel the dead, of course. And my polyp is very dead. I know because the doctor gleefully showed it to me, then chucked it in the bin, along with all the other loser polyps.

Just because I am not comfortable talking about my relationship with my polyp doesn’t mean that others shouldn’t talk about theirs. I don’t believe in censorship. Freedom of speech is a basic fundamental human right and the bedrock of democracy. It allows us to criticise our leaders and politicians and hold governments, institutions and corporations to account, to express our opinions however we choose, through words, cartoons, music, mime, origami or baking. Free speech is crucial in democratic societies. Without it, our stories aren’t told.

But it comes with responsibility. It doesn’t mean we are free to say whatever we like, to whoever we like. There are restrictions. We can’t incite hatred, for one. But we also have laws protecting the individual against defamatory or untrue statements. Jeremy Corbyn has won an apology and a payout to charity from Tory MP Ben Bradley for saying he had “sold British secrets to communist spies”. Obviously comedians aren’t politicians, and while we should never not say something for fear of offending someone, we’re still obliged to consider that what we say may cause others distress. That’s not self-censorship – it’s basic politeness.

As long as you’re polite, and ask someone if you can brutally mock and expose them on stage and have loads of strangers laughing at them, you should be completely free to do so. I can see it from both sides. A journalist once implied that I had fucked my way to the top in comedy, “in order to get on in this business”, because he didn’t think I was very good and couldn’t understand how (at the time) I’d achieved the dizzy heights of performing to 35 people in a 70-seat venue. It caused me much distress and upset. I received an apology from the publication and that part of the review was taken down from its website.

I’m always conscious of how my material might affect other people’s feelings, and I don’t know if that’s good for comedy or not. For my recent Radio 4 series, Bridget Christie’s Utopia, I interviewed people about their lives. We played the clips on the night in front of a live audience. For whatever reason, something one of my guests said got the wrong type of laugh, which made it sound as if we were laughing at them. It hadn’t happened before and I don’t know why it did on the night. It wasn’t intended, and was absolutely the last thing I wanted, so the whole routine was taken out and we worked around it.

In reality, my guest might not have cared, but it made me think that we can’t control what happens to our stories once they’re out there. Storytelling is an integral part of human interaction. It’s how we understand and shape the world. We’ve always done it. We huddled around fires, in caves, and we told stories and jokes to one another. Some of them were shit and were never told again, but the good ones were told again and again, and were passed down from generation to generation, like family heirlooms or defective genes, until they became part of folklore. These stories have preserved cultures and traditions and helped instil moral values in our children. Unlike now, when the only way to instil moral values in our children seems to be to confiscate their iPads until hot, salty moral values stream down their tiny, 21st-century cheeks.

Our stories make sense of the world. They can be life-affirming, life-changing and cathartic, for both author and audience. Another reason I don’t heavily rely on my own personal life for material is because I am married to the comedian Stewart Lee, and so any routines about awkward sexual encounters or the distribution of domestic chores are massively compromised by the loss of anonymity. My story isn’t my story any more. It’s become Stewart Lee’s story. My audience aren’t laughing at my skilfully constructed routine, they’re laughing at the idea of the comedian Stewart Lee putting the bins out. So it’s slightly more problematic for me to do relationship stuff than it would be if I was married to a bin.

I love my real husband, but being married to him can be annoying. Someone said to me the other day: “So you’ve moved to the country? How’s that going?” I didn’t know what he was talking about. I’d just talked on the radio about why I didn’t want to move to the country, so I was confused. But he hadn’t heard my programme. “Your husband wrote a column about it,” he said. “Ah,” I replied. “Sometimes the things comedians say aren’t true. The columnist Stewart Lee may have moved to the country with his fictional wife, but I haven’t. Also, we’re not really married. I just pretended to be married to him in order to ‘get on in this business’.”

I appreciate I’m in a minority in my pursuit for privacy. I’m often flabbergasted at the level of intimacy people are happy to share, not only on stage but also on social media and on TV. When I stumbled across Channel 4’s Naked Attraction one night and saw six vaginas displayed in glass boxes as a man decided which vagina to go on a date with, while comparing one of the vaginas to a cheeseburger, I knew I was out of step with the modern world. No wonder young women won’t have cervical smears.